Why would packing molecules too close together cause an explosion?

I just watched this video, and around 75 seconds they say

if king Midas touched a duck, and all of its atoms gained the necessary protons/neutrons/electrons to become gold, the duck would be 33x more massive and 20x as dense. The gold atoms are too close, and repel each other resulting in a explosion with the energy of half a ton of TNT

Why does this happen? is it electrons repelling each other? Is there some other force besides electromagnetic? What calculation is involved in coming to the ~2 Gigajoules of energy being released?

The electromagnetic force (of the fundamental forces) does predominate, arising from Coulomb repulsion of the electrons and nucleus and the Pauli exclusion principle. If I wanted to estimate the energy $U$ released, I'd look to the strain energy. This is $$U=\int \sigma V\,d\varepsilon=\int K(\varepsilon)V\varepsilon\,d\varepsilon,$$ where $\sigma$ is the pressure required to obtain the equivalent compression, V is the volume, and $K(\varepsilon)$ is the bulk modulus (i.e., the volumetric stiffness) as a function of the compressive volumetric strain $\varepsilon$. Here, we're simply integrating the infinitesimal compression work done while keeping open the possibility that the bulk modulus varies with the strain, as the latter is very large.

(If the strain were small enough that the bulk modulus and volume could be considered constant, which is the typical treatment in linear elasticity, then we could move $K$ and $V$ out of the integral and obtain simply $KV\varepsilon^2/2$.)

Since bulk compression is generally recoverable, we could make the assumption that immediately after the transformation, the system releases this strain energy immediately in a variety of phenomena that all ultimately dissipate into thermal energy.

This is much less than the reported value of 0.5 tons of TNT, but note that we can expect the bulk modulus to increase sharply with increasing compression; this is a consequence of the pair potential having a much-higher-then-quadratic dependence on the interatomic spacing as we compress a material mightily. (Otherwise, the pressure needed to compress a material into nothingness would be exactly $K$.) That increase in the bulk modulus results in much more releasable strain energy stored in the material.

Please let me know if you see a calculation error. I'll look for the compression dependence of the bulk modulus of gold or similar metals.

Edit: Found a very useful figure from E. Güler and M. Güler, "Geometry optimization calculations for the elasticity of gold at high pressure," Advances in Materials Science and Engineering (2013): 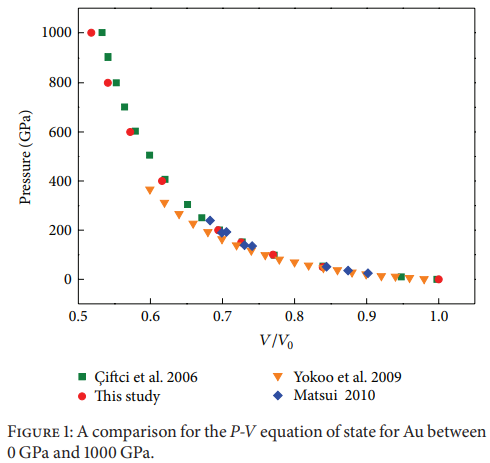 Note that assuming a constant bulk modulus of 150 GPa would imply that 75 GPa is required to obtain a volumetric strain of -0.5. The initial slope is heading in that direction, but the actual value exceeds 1 TPa for the reasons discussed above. This corresponds to more stored energy and a much better fit with the quoted value. This makes me very curious as to what calculations they performed to obtain their estimate.

There are ways to add more protons and neutrons to some atoms. For certain isotopes of hydrogen, if you slam two nuclei together hard enough they form a He nucleus. They also liberate a lot of energy. If you do this to a lot of nuclei all at once, this is a Hydrogen bomb. The energy of half a ton of TNT is small potatoes compared to other energy released.

For heavier nuclei than lead, you have to add a lot of energy to get more protons and neutrons to stick. You could not do it without providing about as much energy as a Hydrogen bomb releases.

Not all combinations work. Something like carbon or oxygen (because a duck contains a lot of these) and a target like gold (because that is what you want to make) might or might not be possible to convert.

A magic touch wouldn't do it. Typically you have to slam particles together at temperatures like the core of the Sun or hotter. It might take a chain of these kinds of reactions. As you can imagine, there are practical difficulties in addition to theoretical ones.

And however he did it, what King Midas wound up with wouldn't even slightly resemble a duck.

Not the answer you're looking for? Browse other questions tagged particle-physics physical-chemistry explosions or ask your own question.

0
Why does a lump of explosive burn's with an explosion?
26
Why does a nuclear explosion have directionality?
1
Why does intramolecular hydrogen bonding cause molecules to separate?
0
What is the cause of the flash of light and debris immediately above this explosion?
4
How would a nuclear explosion look in vacuum?
0
Could you cause a small “nuclear” explosion manually
0
Can an atomic bomb/rocket with nuclear warhead's nuclear explosion be triggered by a conventional explosion close to it?
0
Why must there be a delayed ignition for a vapor cloud explosion?