Why don't currents due to revolution of electrons add up?

I read that electrons revolving around the nucleus have a current due to the revolution, and it has a formula 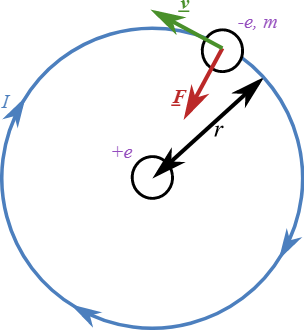 So how is possible that despite currents due to that revolution, the net current is $0$ for any object that doesn't have a potential difference across its ends? i.e., why doesn't the current just add up and create a total current for every object?

What you heard ( you do not give a link) is a simplified classical electricity and magnetism model for the atom, but it has been known for decades that atoms, electrons, and nuclei can only be correctly modeled using quantum mechanics. In the image you show, in classical electricity and magnetism, the electron would lose energy and fall on the nucleus neutralizing it. It is the reason Bohr developed his model demanding angular momentum quantization, which was superseded by the theory of quantum mechanics. See my answer here.

In quantum mechanics, the electrons are in orbitals around the nucleus, not in orbits. Their location is given by a probability distribution given by the complex conjugate squared of the wavefunction, $Ψ^*Ψ$. It is not a consecutive track to be able to contribute with other tracks and add up to a classical current because the electrons are in fixed energy levels about each nucleus.

In contrast, in lattices, one can have a classical microscopic view of current because in the quantum mechanical model of conduction band electrons, they are free to move over all the lattice and thus give a measurable current.

The current, You are looking at, is what call a Bound current. The bound current is different from the free current (which you get when you put a battery across the conductor).

It is often useful to distinguish between bound currents and free currents. Bound currents are currents associated with molecular or atomic magnetic moments, including the intrinsic magnetic moment of particles with spin. These are the molecular current loops envisioned by Ampère, the source of the magnetization we have just been considering. Free currents are ordinary conduction currents flowing on macroscopic paths – currents that can be started and stopped with a switch and measured with an ammeter.

You ammeter measure the amount of charge that flows through it in unit time, In bound current as you see the charges are bound so they can't contribute to like free current do.

Remember that current density (or more precisely probability current density) is a vector field. It has a magnitude and direction at each point. Two atoms with the same magnitude current density at a point may add together or cancel out, depending on the direction. With random orientations over large numbers of atoms, the average is usually very close to 0.

There are cases where the orientation is not random. Those lead to ferromagnetism.

The current is an analogy in the sense that you have a moving charge. However, this current is not like currents in a circuit where the electrons are moving due to a potential difference. The current is just due to the orbit of the electron around the nucleus, similar to how there is a "mass current" due to the Moon orbiting the Earth.

why doesn't the current just add up and create a total current for every object?

Because this "current" isn't flowing throughout entire objects. We are just looking at electrons revolving around single atoms. However, there can be object-wide effects, typically through magnetic moments of these "currents" depending on how they align.

It is common for the magnetic effects of electron spin (rotation) to add up -- in ferromagnets -- but the effects of orbital angular momentum (revolution) generally average to zero. You must dig pretty deep into QM to understand the mechanisms that favor aligned electron spins in some materials, but these specific mechanisms do not apply to molecules. Even if you were to consider pairs of molecules or ions with magnetic moments attributable to orbital angular momentum, the coupling of their magnetic moments would average to zero when you integrate over relative positions of the molecules.

Remember that current is the amount of charge passing through some area per unit time. So whether you'll have current or not will depend on your chosen area.

When we talk about current through a wire, we assume the area to be the planes perpendicular to the length of the wire. Is there any net flow of electron through these planes? There isn't. Without an applied potential, electrons are just randomly shooting left and right across the cross section of the wire. So there is no net current

Current happens due to drift of charged particles, i.e. if you were able to tag each charges you would be able to see these charged particles physically moving in the material, that results in current. Here the electron is bound. This is just like a circular wire connected end to end and since its "bound" you cant divert these electron using a different wire. Hence these charge motion does constitute current but its not conductive current.

This can be explained with classical mechanics:

In most materials the orbitals on all the atoms and molecules are oriented in random directions. With the huge numbers you find in a macroscopic "object", it all averages out to basically zero.

It can be easier to visualize if you think of the axes of rotation rather than the circles. They're all jumbled up in every direction.

In a ferromagnetic material all those axes are aligned, but the rotation is in randomly-distributed opposite directions so it still cancels out. But if the material gets magnetized, this happens by flipping them so they're all aligned the same direction.

And then it produces macroscopic effects, like what you're referring to.

198
Why don't electrons crash into the nuclei they "orbit"?

31
What are the fields produced around a current carrying conductor?
0
Charge density of turning object
1
How can metal objects become electrically charged, if current flow means that an equal number of electrons enter/leave the object?
2
Current in a conductor
2
Which explanation of the Seebeck effect is correct?
0
Would a flow of current (of positrons) zap us?
0
Why do the electron and hole currents vanish in equilibrium in a semiconductor?
0
If the current of the branches in a parallel circuit always add up to the same total, why isn't this true in this example?
6
Why don't stationary charge feel force from a current carrying wire?