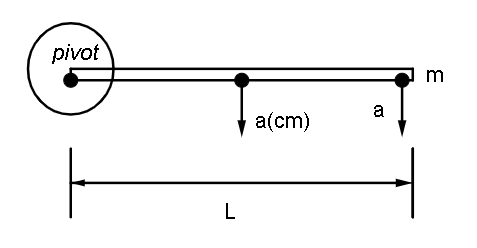 As is evident from the figure, we have a rod of length 'L' and mass 'm' pivoted at one of its ends. The rod is free to rotate about the pivot. The rod is released from a horizontal position as shown in the figure. We are interested in finding accelerations of two points, the center of mass and the extreme end(towards right) right at the moment when the rod is released.

For Center of Mass:

There will be two accelerations for the point, centripetal and tangential. But at the moment the rod is just released, angular velocity($\omega$) will be zero hence tangential acceleration will be the only acceleration.

Now the Question: In the downward direction, only gravitational force is acting. The acceleration of COM is less than $g$ and that is understandable because the pivot will also exert some force which accounts for the external force acting on the rod. But why is the acceleration of end point greater than the acceleration due to gravity, $g$ ? 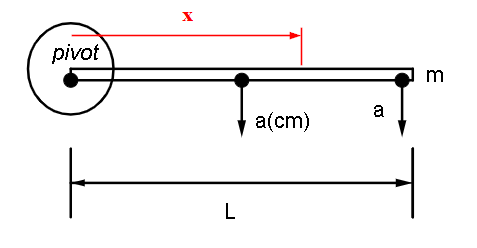 This point is found by solving $g = x \, \alpha$ and the solution is

This point is called the axis of percussion of the rod.

Any point beyond $x$ will accelerate more than $g$ and any point inbound of $x$ less than $g$ due to the kinematics of the problem. So what is so special about $x$?

A force through $x$ would rotate the rod without any reaction from the pivot. But there is another definition of the axis of percussion. It is the exact point where an impulse applied that is equal but opposite to momentum the body would stop translating and rotating at the same time.

There is a connection between the point where acceleration is $g$ and the axis of percussion (IAP). The connection is that point $x$ is where you would place the effective mass $m_x$ to transform this problem into a lumped mass problem. Replace the rod with distributed mass with a point particle with mass $m_x = \tfrac{3}{4} m$ at the IAP and the device should be dynamically equivalent. The dynamic response of a lumped mass is that of free fall with $g$.

How do we find the effective mass $m_x$. The easiest way is do a kinetic energy equivalence between a rotating rod from one end and a translating moving mass

This mean that if the moving rod hit you in the head at point $x$, you would feel like a mass $m_x$ hit you. The further away $x$ is, the less the effective mass. But the effective mass of a rotating object is another discussion to be had somewhere else.

Yes that's because the force from the wall is actually applying a torque on the rod. Now torque doesn't impart a linear momentum but it imparts an angular momentum.

More explicitly the wall is pushing the rod upward, since the push is not at the COM it imparts a torque on the rod. Hence the opposite side gets pushed downwards.

Why does the right end has acceleration > g?

To see this explicitly lets use the fact that "Any complicated motion can be decomposed to motion of the COM and motion about the COM".

PICTURE 1 - Motion of the COM -
Here this instant the COM is executing a simple fall under gravity. i.e. COM has a acceleration of g. To illustrate this, consider the same rod independent of pivot to be horizontal and falling under gravity, i.e every point of the rod has an acceleration equal to g.

PICTURE 2 - Motion about COM -
Consider the rod to be simply rotating about the COM and the COM is at rest. The torque that causes this rotation is equal to the torque imparted by the pivot at this instant. To illustrate this, consider our rode at rest, but rotating about the Instantaneous axis of Rotation which is COM here.

3
Does a pivot exert an additional force, normal to the centripetal force, on an object rotating about it?
0
"Sweet Spot" of Rod-Pendulum - Problem Clarification
0
Pendulum with Friction
0
Rotational dynamics regarding uniform rod
0
A rod rotating about a pivot
31
Will a falling rod stay in contact with the frictionless floor?