Is the Bohm-Aharonov effect a proof of real $U(1)$ local gauge transformations "taking place" (instead of being just a math procedure)?

Under a local gauge (phase?) transformation of the field operator for electrically charged fields, $\psi \rightarrow e^{\mathrm{i}\phi(x_{\mu})}\psi$, where $e^{\mathrm{i}\phi(x_{\mu})} \in U(1)$, the associated $\mathcal{L}$ remains invariant if we add an electromagnetic potential $A_{\mu}$ to it.
(If instead of performing a local gauge transformation we perform a global one, $\psi \rightarrow e^{\mathrm{i}\phi}\psi$, then no four-potential $A_{\mu}$ has to be added to the Lagrangian to keep it invariant under this transformation. This transformation is, via Noether's theorem, associated with the conservation of the number of particles (or "conservation of probability") and thus electric charge).

All neat and well. Now, look at the shifted pattern of the double-slit experiment. Can we reason in the other direction too? Can we say that if we physically make a four potential $A_{\mu}$ appear (in this case only the space part is present) appear, as in the experiment, that this causes the shift in the diffraction pattern? Does this field, which is constant, induce, indirectly, a global transformation on the pattern? Or, directly, a local gauge transformation on the electron field (states)? It looks as if the pattern is globally phase transformed. This means that the electron-field "in-between" is globally transformed too. Is the four-potential inducing phase-shifts on the electron field between slits and screen? Thereby making some paths more and some paths less probable (in the path integral formulation)? Note that the diffraction pattern moves in the other direction if the current inside the solenoid is reversed.
So it seems as if the global phase transformed pattern stands in direct relation to locally transformed electron states. Can we say these states are not gauge transformed at random (as in the mathematical procedure of imposing a local gauge transformation on the charged field which makes an $A$-field show up) but as a result of the $A$-field (which is cylindrical symmetric and constant in time)?

Or stated in still another way: can we say that instead of the fact that a local gauge transformation gives rise to an $A_{\mu}$ field the reverse holds, namely that an applied $A_{\mu}$ field gives rise to real local phase transformations? Moreover, in the face of quantum fields mapping spacetime points to operators, this doesn't seem unreasonable.

I found some new information on this subject:

4.3 The Aharonov-Bohm effect The Aharonov-Bohm effect (Aharonov and Bohm, 1959) deserves special attention since it is often considered to be an instance of the Berry phase. The scenario is very well known: a split electron beam passes around a solenoid in which a magnetic field is confined. The region outside the solenoid is field-free, but nevertheless, a shift in the interference pattern on a screen behind the solenoid can be observed upon alteration of the magnetic field. The phase shift can be calculated from the loop integral over the potential, which—due to Stokes’ theorem—relates to the magnetic flux,...etc.

More can be read here, where the Berry phase is discussed. Somehow this seemed important for this problem. I don't know exactly how though. 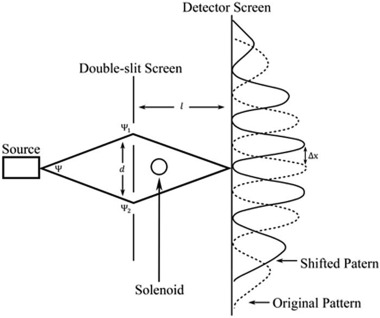 I'm not sure this is all directly relevant to your question, but it is a good opportunity to clarify a few issues.

Now, I suspect that you think that the position of the central peak of the interference pattern is related to the actual value of the phase (if we were to define this with respect to some reference). Then if you shift the phase field $\phi(x) \to \phi(x) + \alpha$ by a global transformation (whether or not with respect to the reference), then the peak will also be shifted. You say: "Clearly, the pattern on the screen has undergone a global phase transformation".

This should be sufficient to understand why global transformations have no effect on the interference pattern. But, regarding your constant vector potential $A_\mu(x) = A_\mu \forall x$, you can also trivially see that $\oint \text{any constant} = 0$, and you can always write the accumulated phase difference as some closed contour integral.

A full analysis of the Aharanov-Bohm effect in the double slit experiment is beyond the scope of this answer, but the idea can be understood from a toy model. Consider the following setup:

Imagine electrons confined to move along two wires as shown, but which are otherwise free. They're drawn separately so as to be visible, but we are imagining them to be infinitesimally close together. The dotted region denotes the interior of the solenoid (the only place where the magnetic field is nonzero); in the exterior, the vector potential is given by $\vec A = \frac{\varphi_0}{2\pi r}\hat \phi$, where we've chosen to use the Coulomb gauge.

If $\vec A \neq 0$, this is no longer true; each state acquires an additional phase factor given by $e^{i\gamma} = e^{ie\int \vec A \cdot d\vec r}$, where the integrals are taken over the respective paths. Integrating over the bottom path yields

If you'd like to change the gauge, you are welcome to do so - gauge transformations are basically passive coordinate changes, albeit in a somewhat abstract sense. We multiply each wavefunction by $e^{i\alpha(\vec r)}$ and add $\nabla\alpha$ to the vector potential. The extra factor of $e^{i\alpha(\vec r)}$ clearly doesn't affect the phase difference between the two beams at any individual point because - since $\alpha(\vec r)$ is being evaluated at the same point - the two beams are (locally) phase-shifted by the same amount. The phase difference acquired as they traverse their respective semicircles is also unaffected because

Can we say that if we physically make a four potential $A_\mu$ appear (in this case only the space part is present) appear, as in the experiment, that this causes the shift in the diffraction pattern?

Yes, the presence of a non-zero vector potential causes the shift in the diffraction pattern.

Is the Bohm-Aharonov effect a physical proof of real U(1) local gauge transformations being performed (and not merely mathematical)?

Not the answer you're looking for? Browse other questions tagged quantum-field-theory path-integral double-slit-experiment interference gauge-invariance or ask your own question.

12
Covariance in gauge theories: why should the Lagrangian be gauge invariant

6
Generalization of spin coherent states for an arbitrary group?
8
Gauge invariance and Bohm-Aharonov effect
10
What are global and local gauge invariance defined as they are?
2
Global $U(1)$ transformation properties of gauge fields
3
Which particle mediates the Aharonov-Bohm effect?
2
Gauge transformation and phase matching in cylinder coordinate for the Aharonov-Bohm Effect