Physical Meaning of Vanishing of the Norm of the Weyl Tensor

The BBMB Black Hole is a solution of the action:

where $\phi$ is a scalar field.

Computing the Weyl invariant we find:

The metric is the extermal Reissner Nordstrom one and the scalar field diverges at the black hole horizon: $r_H=m$. Is there any physical meaning behind the vanishing of the Weyl invariant at the point of divergence of the scalar field?

Let us leave scalar field aside for now and discuss just the geometry, which is the same as that of an extreme Reissner–Nordström (ERN) solution.

The ERN metric is type D of Petrov classification, so vanishing of Weyl invariant implies that the Weyl tensor is zero at the horizon (and not just null). Under suitable choice of NP tetrad there is only one Weyl scalar of NP formalism: $$ \Psi_2 =\frac{m(m-r)}{r^4}, $$ which describes “Coulomb-like” gravitational field of an isolated charge. To clarify the physical meaning of this structure of Weyl tensor one could consider the stresses induced within some extended body (“gravitational compass”) by tidal accelerations of its different parts as was discussed by Szekeres here, see case (c) in this image: 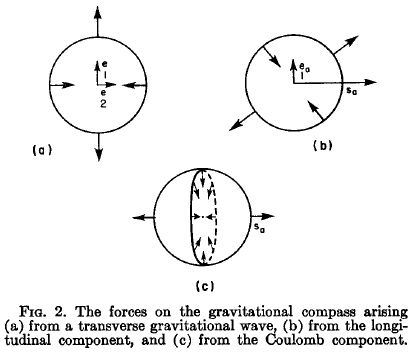 So the vanishing of Weyl tensor means that the stresses from tidal accelerations on such a device would vanish when it approaches the black hole horizon.

Note, that for a non-extreme RN solutions there is still a hypersurface where Weyl tensor vanishes located at the minimum of $g_{00}$ metric component, $r=Q^2/M$ in Schwarzschild coordinates. For non-extreme RN black hole this hypersurface is spacelike and located between inner and outer horizons, while for over-extreme RN solutions it is timelike and serves as a boundary between regions where gravitational attraction toward the central singularity at larger $r$ changes to gravitational repulsion at smaller $r$.

Vanishing of Weyl tensor on the horizon also means that the near-horizon geometry is conformally flat. This near horizon limit of ERN geometry is Bertotti–Robinson spacetime $AdS_2 \times S^2$.

Now, let us discuss the scalar field of the BBMB solution. To me the intuitive reason why scalar field must diverge at the horizon is simple: the spatial distance to the horizon as measured by an integral $\int \sqrt{|g_{rr}|} dr$ along $t=\mathrm{const}$ hypersurface is infinite. And since $\phi$ is dependent only on $r$ and its SE tensor remains bounded on the horizon the field variation must also be infinite as it reaches horizon. Note, that scalar field singularity at the horizon is rather mild from the point of view of both neutral particles and particles carrying scalar charge as has been demonstrated by Bekenstein. Also, the existence of enhanced $AdS_2$ near-horizon symmetry, which maps time independent scalar field onto time dependent but still having a static SE tensor, suggests to me that there must also be a dynamical version of BBMB black hole with time dependent scalar field that sources precisely the same geometry and has a nicer behavior across horizon. There is probably a connection with “Aretakis charges” describing polynomial growth of scalar field perturbations near ERN horizon. While Aretakis' original work concerns test fields, there must also be a nonlinear version of the results. One could also look for a version of Couch–Torrence inversion symmetry relating both metric (such as asymptotic values of NP scalars) and scalar field quantities at horizon and at spatial infinity.

All this suggests that there must be some interesting physics happening with conformal scalar field near the horizon of BBMB black hole.

Not the answer you're looking for? Browse other questions tagged general-relativity black-holes curvature or ask your own question.

5
Why $C_{abcd}C^{abcd}$ in de Sitter–Schwarzschild metric doesn't depend on $\Lambda$
1
Physical interpretation of the Reissner-Nordstrom metric
0
In any collapse does the horizon "emerges" from $r =0$?
5
Charged Black Hole in 1+2 dimensions without cosmological constant
3
Does the physical singularity of the Reissner-Nordstrom metric have a ring structure?
1
Does the divergence of the electric potential in the event horizon describe a singularity?