Why can't the Earth's core melt the whole planet?

Why can't the Earth's core melt the whole planet? In other words, what is stopping Earth from being melted up to its surface?

Think about a frozen-over lake in the winter. The water underneath is liquid, but it doesn't melt the ice. In fact, it wasn't even able to stop the ice from freezing as the weather got colder in the winter. The surface of the lake was losing heat faster than it could soak up heat from the warmer water below, so it froze while the deeper water was still liquid.

The earth was completely molten right after the impact that formed the moon. That's like the lake at the end of fall. The liquid surface radiated heat away into space until first the surface solidified (pretty quickly) and then the depth of solid rock got greater and greater. The hotter molten rock down below just couldn't heat up the surface fast enough to keep it molten.

First thing to notice is that the heat flow is limited, so the heat from the core does not flow to the surface instantaneously.

Second point is that the surface of the Earth radiates energy to the space. The combination of these effects makes it possible to have a molten core but a cold surface.

Why can't the Earth's core melt the whole planet? In other words, what is stopping Earth from being melted up to its surface?

I'll rhetorically ask the reverse question: Why can't radiation to empty space freeze the whole planet? In other words, what is stopping Earth from being solid all the way down to its center?

The answer to this reversed question is that that is exactly what is happening, but doing so takes a long, long time, about 4.5 billion years and counting. The Earth's crust apparently formed fairly early on and cooled rapidly, possibly rapidly enough to have enabled liquid water only a few hundred million years after the Earth formed. This is the Cool Early Earth hypothesis.

This ever-present cooling has barely reached the center of the Earth, for several reasons:

Why can't the Earth's core melt the whole planet?

Because the heat flow rate from the Earth's interior is far too small.

It is worth mentioning that if you double the radius, the surface of a sphere increases by a factor of 4. And the volume of the outer 3000km of the planet is 7 times the volume of the inner 3000km. So there is a lot of opportunity to dissipate heat.

Also, this phenomenon can be observed during eruptions, where lava quickly develops a black crust on the outside, even though it is red-hot just below that small cooler crust.

Earth's surface rocks are not melted so apparently the heat energy the surface receives from the hot melted rocks inside the Earth per second is small enough to be radiated out by the surface at low temperature, where it is not melted anymore.

It's all about temperature gradient and heat current. Think of a rod one of whose edges is maintained at $100^o$C and other at $0^o$C the temperature of a given section would be same and a linear function of distance from either of the end.

Similarly in case of sphere with hot core , the temperature keeps on decreasing as you move away from core and also the cross-section through which the heat passes keeps on increasing .

The regions where temperature and pressure are right the medium indeed is molten and convection is the chief mode of heat transfer.

The region surrounding core is theorized to be molten .

Most of the source of "heat" in the earth is caused by radioactive decay, apart from what is left over from the original accretion event. Solid rock is a pretty good insulator, so a lot of that heat only reaches the surface slowly.

The inner core is solid iron and the outer core is liquid iron-nickel. the rest of the earth has a composition not unlike the volcanic rock we see, basalt on the ocean floor and more granite-like on the continents (meaning silicon-oxide mostly with mg,al,fe, etc scattered around).

Rock is no different from any other matter, in that it has different phases depending on its pressure, volume and temperature regime. So basically the PVT regime for rock results in most of the earth being solid.

Vulcanism in most cases is the result of tectonic plate motion which can cause friction but also just move rock from one PVT environment to another where it becomes molten and produces vulcanism. There are a few cases of mid-oceanic hotspots, different from plate boundaries, that also produce vulcanism (like Hawaii).

The internal temperature is largely in a steady state with any loss in primordial heat being replaced by radiogenic heat. At the surface of the earth we also have largely been in a steady state with all the incoming radiation from the sun being shed off into space for no net gain. It fluctuates over large periods of time for several reasons, but never so much as to lead to an extinction of all life since the Cambrian. The maximum fluctuation in average surface temperature has been about 12 deg C over the last 500 million years.

In this answer, I am going to approach the question by approximating the Earth as a uniform spherical ball which has some initial temperature distribution & it is put to some medium with fixed temperature. It does not take into account a lot of things which we might want to take into account when dealing with Earth, but might serve as a good starting point for further calculations. Main point is in the Conclusion section, rest is supporting math.

We solve for $v$ and leater transform back to $u$.

LHS is not in Sturm-Liouville form. The weight function which can make it SL type is $w=r^2$.

How much we want from each eigenfunction

Note that all of the eigenfunctions are solutions to the spatial ODE. We need to figure out how much we want from each eigenfunction.

Combine spatial result with temporal dependence, transform back from $v$ to $u$:

Absolutely not numpy optimized code can be found here. Temperature evolution with an arbitrarily chosen (not physical) initial temperature distribution, produced by the above code can be observed in this YouTube video.

We can see (especially on the video, or from the form of our solution: note the exponential time decay terms) that boundary conditions are overwhelming the initial conditions over time. This is our main issue: the core is not hot enough to melt the surface given how much heat leaves the surface to space.

This post is based on an earlier writing of mine.

David Hammen has a nice answer, I just would like to add a few interesting notes.

You are asking "Why can't the Earth's core melt the whole planet?", and the answer is that it is trying.

Now let me ask you another question, why can't the extreme cold of space freeze the whole planet through to the core? And the answer is again that it is trying.

The two processes come to a equilibrium and we get a habitable planet with a thin, solid layer that we are actually sitting on. 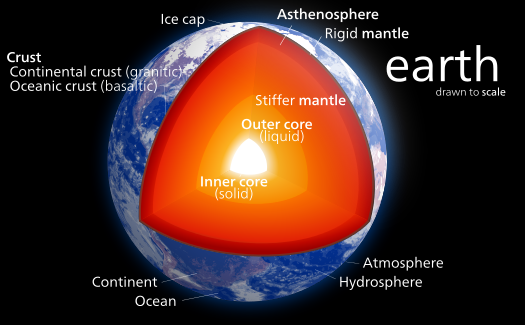 Please note that contrary to popular belief, the inner core of the Earth is actually solid, and only the outer core is liquid.

So we happen to live in an era of Earth with this equilibrium that gives us the habitable top solid layer.

The Sun will exit the main sequence in approximately 5 billion years and start to turn into a red giant.[27][28] As a red giant, the Sun will grow so large that it will engulf Mercury, Venus, and probably Earth.28

Here's a simple answer: All that heat in the core is already being used to keep the core molten. There's not enough heat left to also melt the surface. If their were, the core would have to be hotter.

Not the answer you're looking for? Browse other questions tagged thermodynamics temperature earth estimation geophysics or ask your own question.

9
Why doesn't the heat of the Earth's core diffuse to the surface?