Eddy currents: Explanation of the force slowing down a moving metal plate

Suppose a solid metal plate moves trough a homogenous magnetic field $\vec{B}$ as shown in the following image. You will see that the plate will slow down (as long as not the entire plate is in the homogeneous field).

To explain that the plate is slowed down often Lenz law is cited which states in this case that the magnetic field produced by the eddy-currents is opposes the changing magnetic field.

But how can one explain that this leads to a force which slows down the plate in detail? In particular the situation is not so easy such that one could speak of magnetic north and south poles...

Is there a general mathematical expression for the force in this case?

(It's clear that one cannot calculate it already because I didn't give any technical details, but I just want a general equation for this situation which illustrates the concepts in this example from a mathematical point of view) 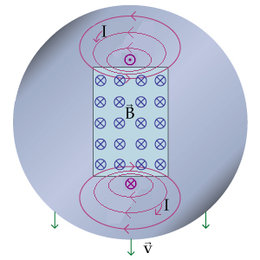 Do you have any good references about this point?

When currents are setup , the energy lost in heat due to moving current (power lost is $i^2R$ in a where $R$ is resistance of the loop in which current moves.) comes from the Kinetic Energy of the plate. So when heat is dissipated, the KE. decreases.

According to lenz law, it sets up a magnetic field to nullify the effect of changing field , The magnetic field would posess energy that would come from it's source ie. the plate.

Magnetic fields exert a force on moving charges. The Lorentz force law for the force on a charge $q$ is

Some of the electrons in the plate can move freely, so when the neutral plate moves in the magnetic field those neutral charges experience a force. This is what creates the eddy current.

But the induced current is also moving charge, and the motion of that charge is also affected by the magnetic field. This eventually works out such that the electrons are dragged to one side of the plate more than the other, which induces an electric field, which in turn pulls the nuclei in the plate and slows it down.

Not the answer you're looking for? Browse other questions tagged electromagnetism newtonian-mechanics or ask your own question.