A long time since I posted it, still did not get a satisfactory solution. So I restate the problem -

Why does not an object attached to a string which is attached to the roof of an accelerating bus does not stay in it's initial position for an indefinite amount of time(and causing the string to stretch so much so as to break it)? In other words what is the time for which the object stays in its initial position? I expect it to stay stationary at that point, since it does initially, when a sudden change in velocity occurs.

One can still see unedited form of the question from the question history (You might want to give it a look, since it differs significantly, but the question is quite the same).

Assume the object hangs vertically before the bus starts to accelerate. When the bus starts to accelerate there is instantaneous relative movement of the object relative to the bus seen by observers both on the bus and on the ground. To the observer on the bus, the bus is not moving and the object moves due to the fictitious force present in the accelerating (non-inertial) reference frame attached to the bus. To the observer on the ground (inertial reference frame), the object is stationary and the bus moves.

In both cases the relative motion of the object relative to the bus is the same and the object continues to move relative to the bus until a component of the tension force (a) counters the fictitious force for the observer on the bus and, equivalently, (b) equals the acceleration of the bus for the observer on the ground. The object moves until it reaches a new equilibrium position. If the object is "tapped" (slightly displaced from equilibrium), it acts as a pendulum about the equilibrium position. See Time period of a simple pendulum in an accelerated frame.

What is the value of acceleration when the string breaks?

It depends on weight of the object.

Think of a case when the object is so heavy that the string is barely able to hold the ball and could break anytime . Even small acceleration in the bus would break the string.

Why does not an object attached to a string which is attached to the roof of an accelerating bus does not stay in it's initial position for an indefinite amount of time...

As pointed out by @John Darby, there is theoretically instantaneous movement of the object relative to the bus as seen by both the inertial and non-inertial observers as soon as the bus accelerates. That's because, per Newton's first law, a body at rest stays at rest unless acted upon by a net external force. The horizontal component of the string tension is that net horizontal force. See the free body diagram of Fig 1 below.

The tension in the string, as a function of $\theta$ and the mass of the object, is then

...causing the string to stretch so much so as to break it

Substituting into the first equation

To put some numbers on this, the coefficient of static friction between the tires and dry pavement is generally in the range of 0.5 - 0.8. Taking the maximum value for static friction, $\theta_{max}$ = 38.7 $^o$. The maximum tension in the string is then

One manufacturer of nominal 1/8 in (3.2 mm) diameter sisal twine says its breaking strength is about 1500 N. Using this in the previous equation we can calculate the mass of the object needed to break this string. That mass would be about 119 kg. 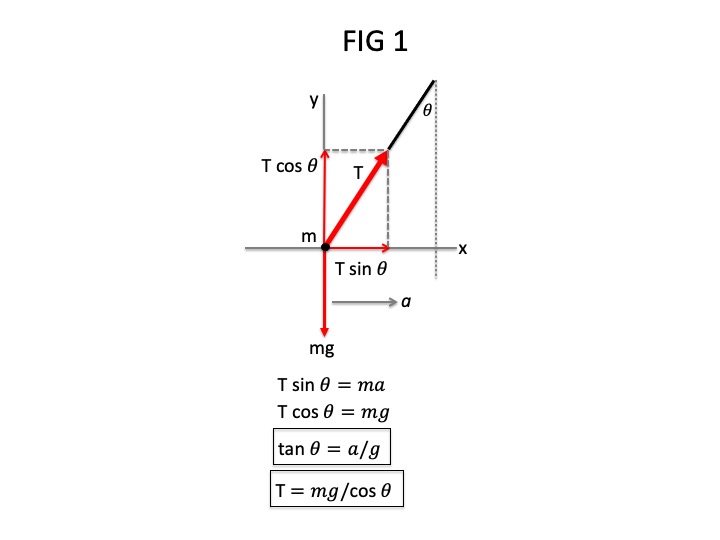 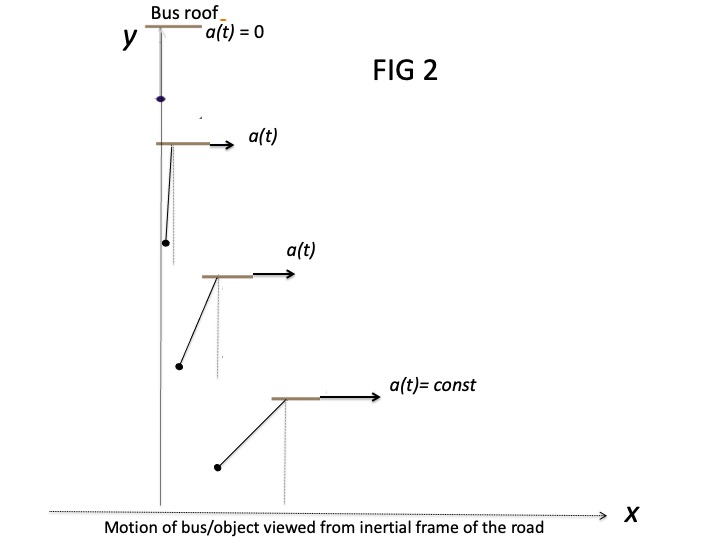 The answer is quite simple, the string attached to the roof pulls the object with it. Now there is a maximum force that the string can withstand, its called the tensile strength, beyond which it simply breaks.

*@Eisenstein You're asking why things can be moved at all from some ordained position. – jpf

@jpf In a nutshell yup. – Eisenstein*

It seems physics has offered the best answer that it can with regard to a questions of attaching a number to the concept we call inertia (the proportionality constant we call mass that results in an equality in a force and acceleration relationship).

The inertia concept is an observation that we make about events we see in our environment. Newton tried to make sense of these and created the useful fiction of a fixed background of time and space. He then went on to say matter is referenced with respect to a "position" at some "time" in this useful fiction. It worked and gives us useful answers as long as we can pretend that someone can act as an observer standing outside the experiment referenced to this framework.

Of course this perspective starts to fall apart as soon as we start to think of cosmology and wonder why the universe is not 5 meters to the left instead of where it is now.

So I think you are asking a very deep question about "an ordained position at some point in time" at a level that we cannot really answer with our present state of knowledge. There are physicists who do think this is an important question and that ti might be tied up with the basic problem of quantum gravity and our lack of progress with it, as well as other paradoxes like a small point-like start to the universe and now some massive "volume" to the universe. Point and volume in what framework? We can't stand outside the universe.

Hopefully this makes some sense and you can appreciate the difficulty in answering what seems like a simple question about an object of matter at some "ordained position" in a deeper way than can be answered using Newton's convenient fiction of space and time.

Right now I see that you meant a string instead of a spring. And that the mass is hanging in a direction perpendicular to the acceleration of the bus. This doesn't alter the reasoning.

Not the answer you're looking for? Browse other questions tagged newtonian-mechanics forces kinematics free-body-diagram inertia or ask your own question.

158
Given Newton's third law, why are things capable of moving?
4
What is value of inertia of a box placed on the floor of an accelerating bus?
0
Time period of a simple pendulum in an accelerated frame

4
About reference frame in Newton's second law?
1
Why does the Fluid inside a Water Balloon Continue to Move even when the Balloon Being Pulled has Stopped?
0
Simple Harmonic Motion for Mass Attached to Vertical Spring
0
Question on circular motion and its application on a beam
1
Why is there energy being spent / work being done in a static system?
0
How come the net force of the pendulum (simple harmonic motion) is changing but an object with uniform rotational motion does not?
1
Is it possible that the tension force would arrive before friction in this problem?
3
Interesting inertia problem