Ask Question
Asked 7 months ago
Active 7 months ago
Viewed 2k times
22
$\begingroup$
This question already has answers here:
If starting speed is faster than terminal velocity then what? (2 answers)
Closed 8 months ago.

I recently read about the property of terminal velocity for objects and I got a question when doing so.

Terminal velocity is achieved when the drag force $f=Dv^2$ (where $D$ is a constant and $v$ is the object's speed) equals the gravitational force $F_g=mg$. Equating these forces is the condition for terminal speed, which is $\displaystyle v_T=\sqrt{\dfrac{mg}{D}}$.

A similar situation occurs when you push hard on a door in between 2 rooms (all other doors and windows are shut) and it slows down until it reaches the terminal velocity.

An object with initial velocity greater than it's terminal velocity will decelerate until it finally hits the ground. 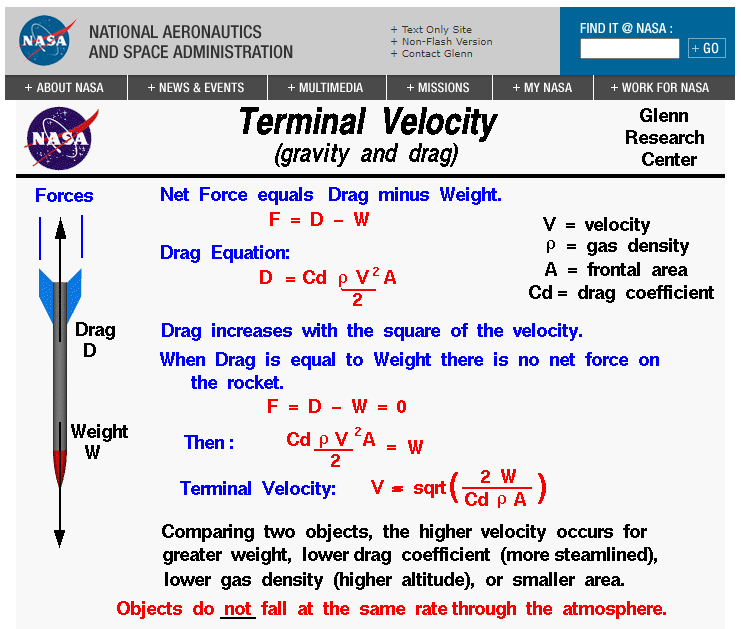 Not the answer you're looking for? Browse other questions tagged newtonian-mechanics gravity projectile drag or ask your own question.

13
If starting speed is faster than terminal velocity then what?

9
Terminal velocity of two equally shaped/sized objects with different masses?
13
If starting speed is faster than terminal velocity then what?
7
Ball thrown from a moving train
0
Equation for Terminal Velocity on an inclined plane and the time it takes to reach it