Is the one-way speed of light in vacuum different depending on direction?

This doesn't seem intuitive (like much of relativity) so I'll explain my reasoning below and hopefully someone can point out where I'm going wrong.

A few points to clarify:

So it seems I really should have added some context to why I'm asking this question :)

My intent is to understand the underlying set of rules that would generate the observables of Relativity. More specifically I am a programmer, so would like to consider how I could program the simplest set of rules to reproduce what we see.

From the comments and very clear answer from g s it seems there is an existing convention to take c as the average of the two way measurement of the speed of light and in the best case my logic is indistinguishable from the more common interpretation that c is equal in all directions, in worst case, it's just wrong.

So my intuition on this is that light being measured equally in all directions is something that would fall out of some simpler rules (e.g. something I can code) whereas it actually being equal from all frames of reference seems impossible to code.

So if there is a fault in my logic then great I can ditch that idea, but if its an equivalent approach to the existing convention, then that has a lot of meaning to me as I can try code it.

I may also try add an answer to my own question just to further show where my thinking is going (and hopefully people can point out any flaws in that).

Depending on how you phrase the question: either the question is meaningless, or the answer is no.

We can examine this by getting rid of the first pulse of light and instead starting our experiment as one observer sees simultaneous flashes from the walls to either side of her. This way, the light from each flash is only ever traveling in one direction (leftward for the rightward flash, rightward for the leftward flash). 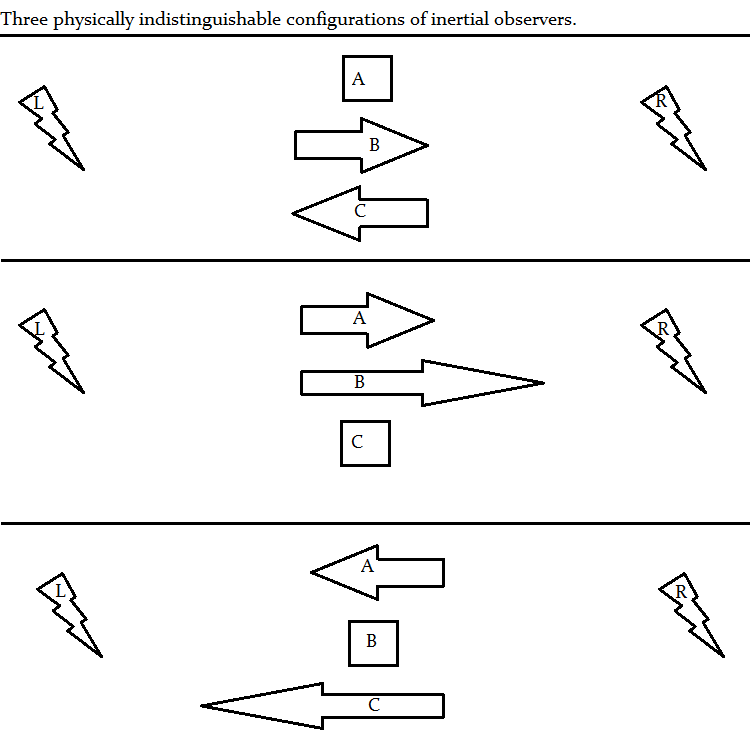 Suppose a system with events L and R, equidistant from a central point, such that L is leftward and R is rightward. Suppose a set of inertial observers at that central point with various relative velocities. Note that L and R are instantaneous events and can therefore not have any such thing as velocity. Suppose for now that the speed of light is the same in all directions.

Suppose that, a short time after we start our experiment running, A observes L and R simultaneous.

Now add V to everything.

So again, B sees R then L, A sees R and L simultaneous despite now being one of the "moving" frames, and C still sees L then R.

However, they will all agree on the same order in which the events must have been observed, regardless of which one of them is stationary.

They all agree that first, C saw L and B saw R. Then A saw both. Then C saw R and B saw L.

Now suppose that the speed of light is different in the different directions by a fixed velocity K, our observers are traveling at the same velocities relative to one another, and A still saw L and R at the same time. We started out by treating the speed of light as being the same in both directions, and each signal is moving on just one direction towards our observers. (L's signal is always moving right, R's signal is always moving left.)

This is identical to adding K to the velocity of all three observers. But we already know what happens when we add a velocity to all three observers: they all still see the exact same things. If we picked the case K=V or K=-V, we could even keep two out of the three of our configuration diagrams. It doesn't matter what we set K to, as long as A still sees L and R simultaneous, everyone always sees the same things as in the case K=0.

Thus, the answer to "Is the speed of light different in different directions by a fixed velocity K?" is that the question is meaningless, since all possible permutations result in the same observables.

Now suppose that the speed of light is different in the different directions by a variable velocity J such that J is different for every observer and equals the opposite of their velocity plus some constant (possibly 0).

Then in every frame, all three observers must see the events as simultaneous. But since they are moving relative to one another, they all now need to disagree on in which order everyone else observed them - and in fact, since the light in their reference frame bounces off of other observers at whatever speed it's moving, they can watch everyone else observe them in different order. In A's frame the events are simultaneous and B moving towards R, so B's right side is illuminated before B's left side, and vice versa for C. But in B's frame the events are simultaneous and A is moving towards L, A's left side is illuminated before A's right side. So on for each combination of observers.

This is a logical impossibility, so the answer to "Is the speed of light different in different directions by a by a variable velocity J such that J is different for every observer and equals the opposite of their velocity plus some constant?" is emphatically no.

Your point #3 asserting that the speed of light is different in different directions is based on an assumption, that speeds add in a particular way. But not all quantities in nature add up simply. If you take two raindrops of radius X and Y and merge them, the resulting drop does not have radius X+Y. So the question is, is speed like radius (not additive) or like volume (additive). Only experiments can tell. Experiments show that in fact relative speeds do not add simply.

So I'm going to create an (incomplete) analogy to highlight my thinking, that the (one-way) speed of light can be different in different directions (relative to an inertial frame of reference) but any attempt to measure that will still give what we observe (e.g. c).

The purpose of this (for me) is to try identify the simplest set of programmable rules that reproduces what we observe in Relativity.

So I'm thinking of a 2m x 2m pool of water (to represent space-time).

I have some metal toys (say a spaceship, a train, anything used in Relativity thought experiments).

I can pick up a toy and move it over the water (let's assume I have a super steady hand and can maintain a constant speed and direction without shaking). This represents an inertial frame of reference. I will limit the speed of the toy to less than c (defined in next point).

I also have a pile of small metal balls which I can hold under the toy and drop into the water. We assume the speed of the ball and distance to the water is negligible such that the ball creates a ripple directly below where it was dropped. This is a single ripple which propagates outwards at speed c regardless of the speed of the frame of reference. Dropping a ball represents a light emitter and the wave represents a light wave.

For sake of simplicity we say we can detect a light wave (from one of our frames of reference) and when we do the wave disappears (maybe we freeze our movement until the wave dissipates?) and we infer that a photon traveled in a straight line from the center of the ripple to the point on the wave where it was detected (keeping in mind this is a rough analogy). This will represent a light detector.

We also need some way to represent mirrors so the toy (frame of reference) will be able to drop a barrier into the water that has the (magical) properties that as it moves through the water it does not displace any water but if a wave hits it then it reflects the wave. If it helps you can imagine a barrier just above the water which the wave will hit but won't touch the flat water. Both depictions have issues but for the sake of the analogy lets go with it and see where it leads us.

And this is as far as I have got. I need to verify if Step 7 is correct (it may be that I need to include time-dilation and calculate c from the perspective of the ship instead). I can probably just fake time dilation with clocks adjusted relative to the frame of references speed (relative to the stationary frame). The reason to fake it is that programming in matter would be a lot of work and the time dilation is better understood (e.g. as motion relative to a frames speed being limited by the speed of light).

So we return to my question (for the purpose of creating a programmable set of rules).

Is there a flaw in assuming the one-way speed of light can differ (even tho we can't measure it)?

13
Can One-Way Speed of Light be Instantaneous?
-2
Measuring one-way speed of light with gravitational lensing