Bosonization and peculiarities of 1-D systems of interacting fermions

I'm studying bosonization and from what I've understood the main reasons why it's useful are that:

It's not clear to me what are the peculiarities of a 1-D system of interacting fermions that make bosonization so useful. I realize the question may be vague, but any hint would be appreciated.

Chapter 1 in Giamarchi discusses "Pecularities of $D=1$", which addresses this in part, especially near Fig. 1.7. Another, perhaps clearer, motivation is presented in Sec. 4 of D. Sénéchal's notes An introduction to bosonization. (It contains Figs. 3,4 which are very similar to Giamarchi's Fig. 1.7.) 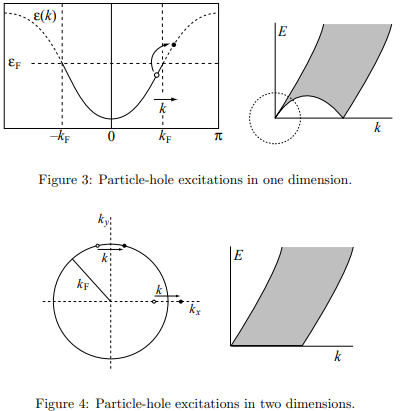 The basic idea behind bosonization is that particle-hole excitations are bosonic in character, and that somewhat the greatest part (if not the totality) of the electron gas spectrum might be exhausted by these excitations. The question was raised by F. Bloch back in 1934, but Tomonaga realized in 1950 that it could only be true in one dimension. The reason is simple: Consider Fig. 3. On the left the creation of a particle-hole pair of momentum k is illustrated. On the right is the spectrum of particle-hole excitations created out of the Fermi sea: the energy of the pair is plotted vs the momentum of the pair (both quantities measured w.r.t. the ground state). Because of the linear one-particle dispersion near the Fermi level, the pairs have a narrow, quasiparticle-like dispersion near zero momentum: they can propagate coherently. In other words, the particle and hole have nearly the same group velocity at low energies and propagate together. Any weak particle-hole attraction is then bound to have dramatic effects, i.e., to bind the pair into a coherently propagating entity: a new particle.

On Fig. 4, the corresponding situation in two dimensions is illustrated, with a circular Fermi surface. There it is clear that a particle-hole pair with a given momentum k can have a continuous spectrum of energies, starting from zero. Thus, the particle-hole spectrum is a continuum throughout and interactions have a harder time forming coherently propagating particle-hole pairs.$^3$ In any case, defining the theory in terms of bosonic excitations is much less obvious in dimensions greater than one.

$^3$This argument is partially weakened by the presence of nesting.

If we accept this argument (if not, we may keep reading the linked notes), it seems that low-energy excitations of 1D systems have a bosonic nature to them, and that it may be useful to treat them as bosonic quasiparticles. This really is what makes bosonization techniques valuable - like in many cases, using the right language or notation or representation can simplify the problem considerably. The low-energy setting is also precisely where bosonization techniques tend to be applied - in the context of low energy field theories in the continuum limit. This allows us to obtain universal low-energy properties of one-dimensional models in a relatively simple language. In contrast, the Bethe Ansatz is only really useful for specific models, and obtaining e.g. correlation functions with it tends to be very involved. In the words of Chapter 5 of Giamarchi,

So far I have discussed the universal features of one-dimensional models, and focussed on their low-energy properties. For this goal the bosonization method is an invaluable tool. A complementary approach is to start from a well-defined microscopic model and to extract all the physics from such a model. Some features will be specific to the model under consideration. This certainly includes the high-energy properties. The low-energy is supposed to be universal and well described by the Luttinger liquid (LL) theory. If one has a method to tackle the microscopic models it can thus be used to check the concept of LL and to determine the LL parameters in a regime where straightforward perturbation expansion fails.

Fortunately, such methods exist in one dimension, and I present some of them in this chapter. On the analytic side the king of all methods in that respect is the Bethe-ansatz. ...

Not the answer you're looking for? Browse other questions tagged condensed-matter many-body correlation-functions fermi-liquids bosonization or ask your own question.