Yet another airplane question

The point of discussion here is the pressure distribution across an airfoil.

In order to simplify the question, I'd like to consider an airfoil which looks like a triangle wedge with the blunt face of the wedge facing into the wind (i.e. the wing is traveling westward, to the left) 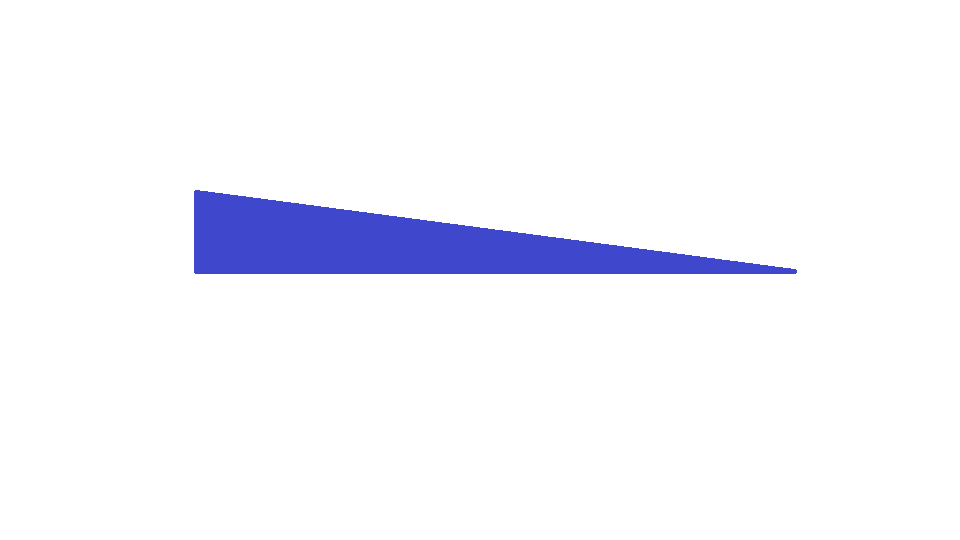 This would be an incredibly draggy airfoil, but should create lift even with zero angle of attack due to the low-pressure region above the wing (note there is not a significant high-pressure region region below the wing).

However, there are two problems here that I'm having a hard time reconciling. 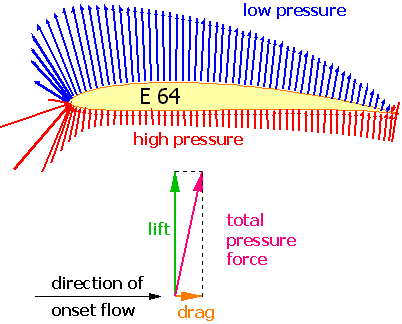 That is, like a piston sucking air, as the airfoil moves through the wind, it displaces air behind it and thus creates a suction force. The air around the airfoil then gets pulled into the displaced region by the airfoil as it moves.

Molecules and atoms do not "hold onto" or "grab" each other when in stable states, so there is no such thing as "sucking" or "suction force." These are really just pressure gradients acting on some part of the system.

First, the reason planes fly is clearly stated in many of the answers to the following question What really allows airplanes to fly?.

Second, the exact location of the lowest or highest region of pressure is not really critical for flight. Well, I suppose the airfoil is likely intentionally designed to have the region with the largest pressure gradient being the most structurally sound. However, my point is that the airfoil could literally be a sheet of plywood, as stated in the following answer. The angle of attack is the critical design feature while the shape of the airfoil is often designed for specific purposes (e.g., reduce drag or provide lift regardless of fuselage orientation relative to the horizon, i.e., both rightside up and upside down).

If we imagine the scenario of this inefficient wedge-shaped airfoil in a wind tunnel, we see that the displaced-air way of thinking about the lift doesn't seem to work.

Why not? The wedge you drew would be a terrible airfoil, not because it is incapable of lift if given a proper angle of attack but because the drag it would cause would be enormous. As long as there is an angle of attack and you push hard enough, there should be a finite amount of lift. Whether the lift is sufficient to keep the object from falling is another question.

Reason being, in a wind tunnel, the airfoil itself is stationary and thus is not actually displacing any air as it moves.

No, there is no difference between an airfoil in a wind tunnel and one on a plane in flight (from the airfoil's perspective). That is, the wind tunnel is just like imagining you are in the plane's rest frame so that the air moves over/under the wing.

So in this situation we can't use the same logic for why the air seems to be "sucked" into the lower pressure region of displaced air. Yet windtunnnels are often used to measure the pressure distribution of an airfoil.

Again, air does not get "sucked" into different regions, but the molecules can be pushed by other molecules. The macroscopic view of this would be a pressure gradient.

I suppose the question here is - is there any difference between an airfoil's pressure distribution measured by moving air past the airfoil (i.e. in a windtunnel) vs moving the airfoil through air (i.e. in actual flight).

Yes, but it's for subtle and often negligible reasons. That is, the air moving in a wind tunnel is often intentionally laminar and almost always parallel to what would be the plane fuselage. When airplanes actually fly, they are often moving through mildly turbulent air that has a bulk flow speed (wind) relative to the ground and that is not aligned with the fuselage.

However, for practical purposes there is no significant difference.

In the new post with the sideways wedge-like airfoil (triangular cross-section), the airfoil will generate lift due to viscosity and geometry inducing circulation according to the Kutta–Joukowski theorem. However, it's important to note that while there may be some lift that does not equate to a net upwards force in the limit of a zero angle of attack. That is, while there may be some lift, it may not overcome gravity and the object attempting to fly using such an airfoil may fall.

As I said before, the answers linked to above go into much more detail on this topic, specifically this excellent answer, which explains the Kutta–Joukowski theorem in gory detail.

I have tested with FEM model incompressible flow around this airfoil for Reynolds numbers range from 250 up to 1000. For every test the lift force is a positive one. Hence, there is effect of lift in the case of viscous incompressible flow. Lift force decreases with Reynolds number increasing. The velocity streamlines (left) and pressure distribution (right) for $Re=250, 1000$ are shown in Figure 1 - upper line and second line consequently. For higher Reynolds number (about 1000) the stationary flow around this airfoil is unstable one (in numerical model). 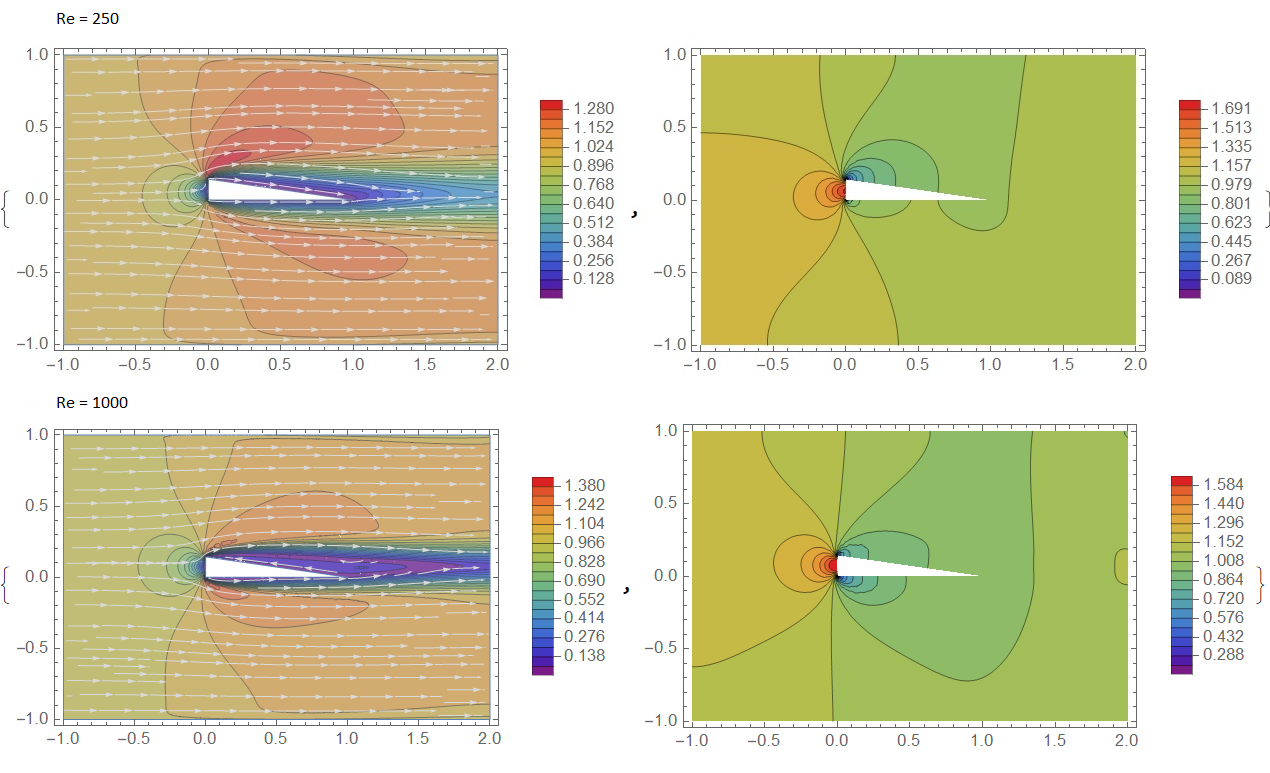 The reason for the lift force is the structure of the flow as I discussed this before in my answer here.

Just imagine a fan blade in this wedged shape, assembled in a way that the blunt side cut the air. It is clear that the (weak) wind generated by this fan goes from straight to wedged side (bottom to top of your drawing). I see no reason to be the other way.

If the air flows in that direction, the reaction force on the blades is in the opposite direction. In the case of a plane, it is a downward force. It doesn't help to lift it.

With your own schematic model, one can actually get quite a good estimate of the aerodynamic lift of e.g. a Boeing 747:

This calculation is based on the assumption of an inviscid gas, so effects due to the viscosity of the air (i.e. collisions between air molecules) are neglected. The airflow around the wing (which the figure you reproduced above are based on) is indeed only a secondary effect caused by the viscosity of the air. It does not cause the aerodynamic lift, which, as demonstrated by my calculation would exist for an inviscid gas as well. I have explained this in more detail on my page https://www.physicsmyths.org.uk/bernoulli.htm

Not the answer you're looking for? Browse other questions tagged fluid-dynamics pressure aircraft or ask your own question.

268
What really allows airplanes to fly?
11
Why does moving air have low pressure?
10
Why airplanes fly: the final truth
0
How are shockwaves created if no particle goes around the wings at supersonic speed?
1
What is the reason for this lift force?

2
How do I calculate speed of air on each side of airfoil?
2
Do wind turbines convert the kinetic energy of air?
16
Why is a beam reach the fastest point of sail on modern sailboats?
5
What causes the air speed difference above and below the wing of a plane?
1
Reason for lower air pressure above an airplane wing
0
Why does Wind Velocity over a wing to increases and what is its cause?
0
Measuring Bernoulli in airplanes