In most cases, physics runs equally well forwards or backwards. Presumably this applies to the emission of a photon by one atom and its absorption by a nearby atom. However the wavefunction description of this process is dramatically asymmetric in time. If I try to run it backwards, I see a wavefunction that abruptly appears in a large volume around one atom and then magically converges towards the other and disappears.

Maybe is just part of the mystery, but is there no quantum-mechanical description of such an event where the description itself has time-symmetry?

[Edit]
Quantum-mechanical example with spatial and time symmetry:
For what it's worth, the following picture shows a perfect ellipsoidal cavity with two atoms - one at each focus. This is a pathological case, but it does seem like the transfer of the excited state from one atom to the other would involve a time-symmetric evolution of the wave function. 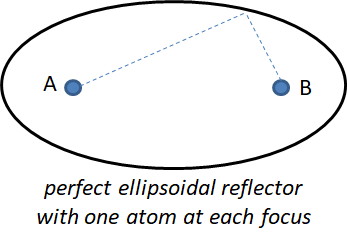 Emission and absorption of a photon aren't instantaneous processes as long as you don't perturb the system by measuring its state. If you do, the system collapses in a non-reversible way. Let me explain how it evolves in the case you don't measure:

An atom in the excited state $| a \rangle$ emits light in the same spatial pattern as a classical dipole antenna: 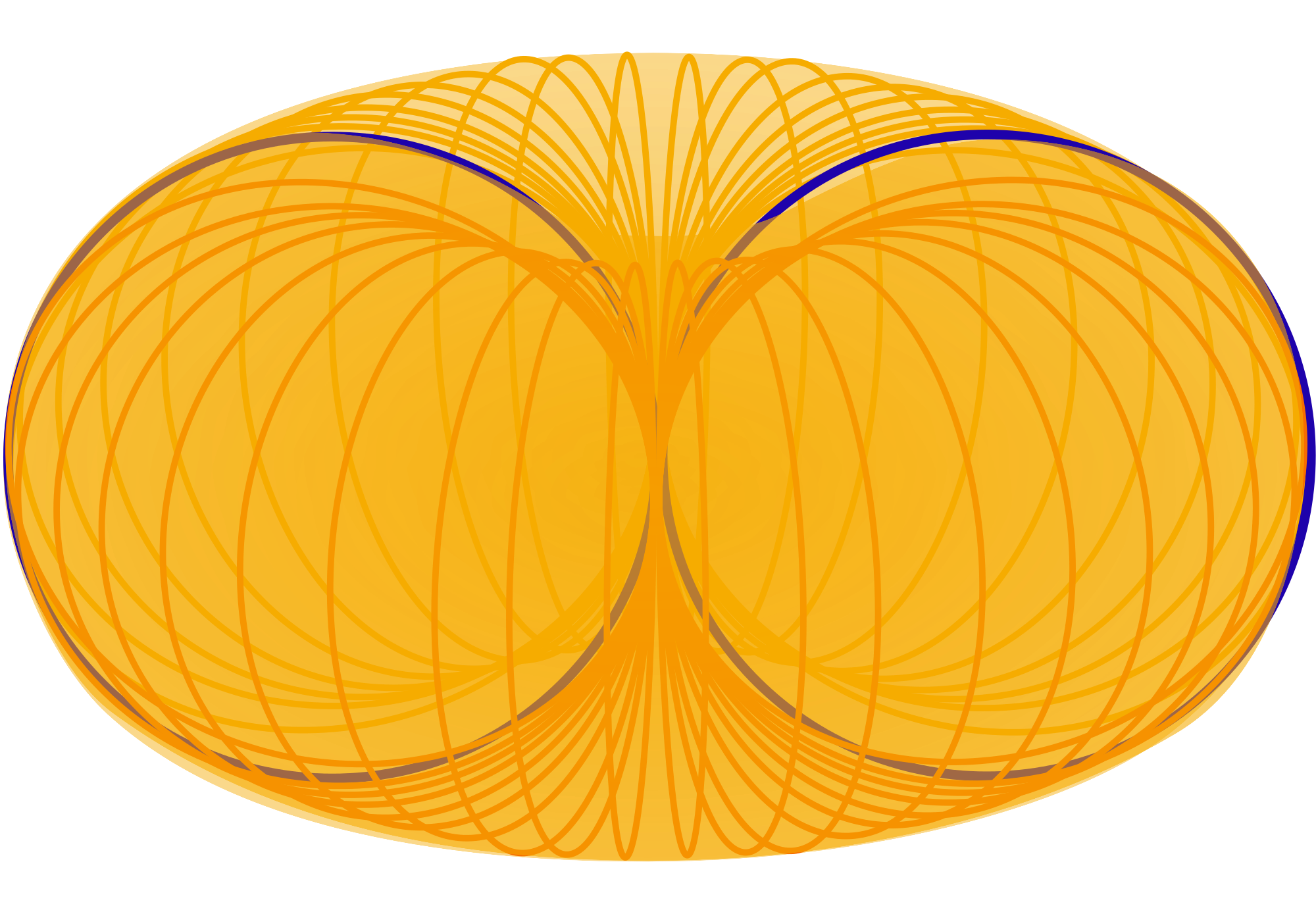 As you correctly state in your question the emission starts out from the position of the atom and moves away from it at the speed of light. Similar to an antenna which is not damped by electrical resistance, but only by the energy it loses due to radiation, the power it emits decays over time. For the case of the atom the state $| a, 0 \rangle$ in which the atom is in the excited state and there is no photon present evolves towards the state in which the atom is in the ground state $| b \rangle$ and there is a photon in a superposition of many modes with different wavevectors $\vec{k}$. This happens smoothly: $$ | \psi (t) \rangle = c_a (t) \, | a, 0 \rangle + \sum_{\vec{k}} c_{b, \vec{k}} (t) \, | b, 1_{\vec{k}} \rangle $$ The temporal evolution is exponential, i.e. $\left| c_a (t) \right|^2 = e^{- \Gamma t}$, so that after infinite time the atom is completely in the ground state and the photon is completely emitted. For a more rigorous description see the Wigner-Weisskopf theory as described for example in Scully & Zubairy – Quantum Optics (1997) chapter 6.3.

All of the described evolution happens unitarily, hence it can happen backwards as well as forwards. If you have an atom in the ground state and prepare a photon in a spatial mode matching the emission pattern of the atom having the right temporal profile you can deterministically drive the atom into the excited state. This is described in Stobińska et al. EPL 86 (2009). It is of course very difficult to do, because you need to focus the light from the full $4 \pi$ solid angle onto the atom and find a way to shape the photon to an exponentially rising wavepacket.

Absorption of a spread-out photon

Coming back to the apparent paradox of your question: If the wavefunction of a photon is extended over a large area how does it excite the atom as if it was localized there? The answer is "It doesn't.". Like in the case of spontaneous emission the state of the overall system evolves in a superposition of the atom being in the ground state / the photon flying around and the atom being excited by the photon. Just that in the case of a photon not matching the spatio-temporal radiation pattern of the atom the probability of the atom being excited $\left| c_a (t) \right|^2$ is very low. So the majority of the wavefunction still describes a free-flying photon.

Only when you measure the state of the atom (or the presence of the photon) you force the system to be in either of the states. This is the moment when the whole spread-out photon collapses to be either absorbed or detected somewhere on a camera. The whole mystery is in the description of collapse due to measurement. But this is another topic, covered in questions like "Practically, how does an 'observer' collapse a wave function?".

Is the absorption also a measurement?

So in the end the distinction between the atom and a macroscopic detector is artificial. But it's justified, because the atom can be coherently manipulated to unentangle it from the photon. For macroscopic systems like the detector (and experimentalist) this is pretty hopeless because they have too many degrees of freedom.

Absorption of a focused photon

In the case of the elliptic cavity the emission of atom $A$ is indeed reshaped to match the spatial emission pattern of atom $B$. Despite this the probability that atom $B$ absorbs the photon is still less than $1$, because the temporal profile of the emitted photon is exponentially decaying, while perfect absorption (time-reversed spontaneous emission) requires an exponentially rising profile. 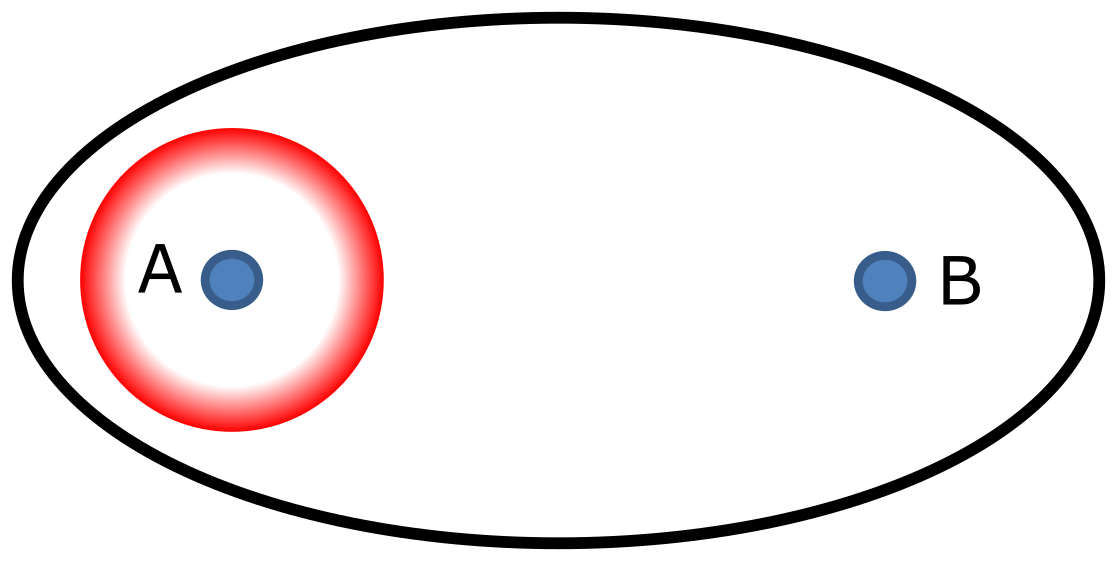 If the cavity size is reduced such that the emission of the photon takes significatly longer than a round-trip of in the cavity, the excitation being initially in atom $A$ can be fully transfered to atom $B$ and vice versa. 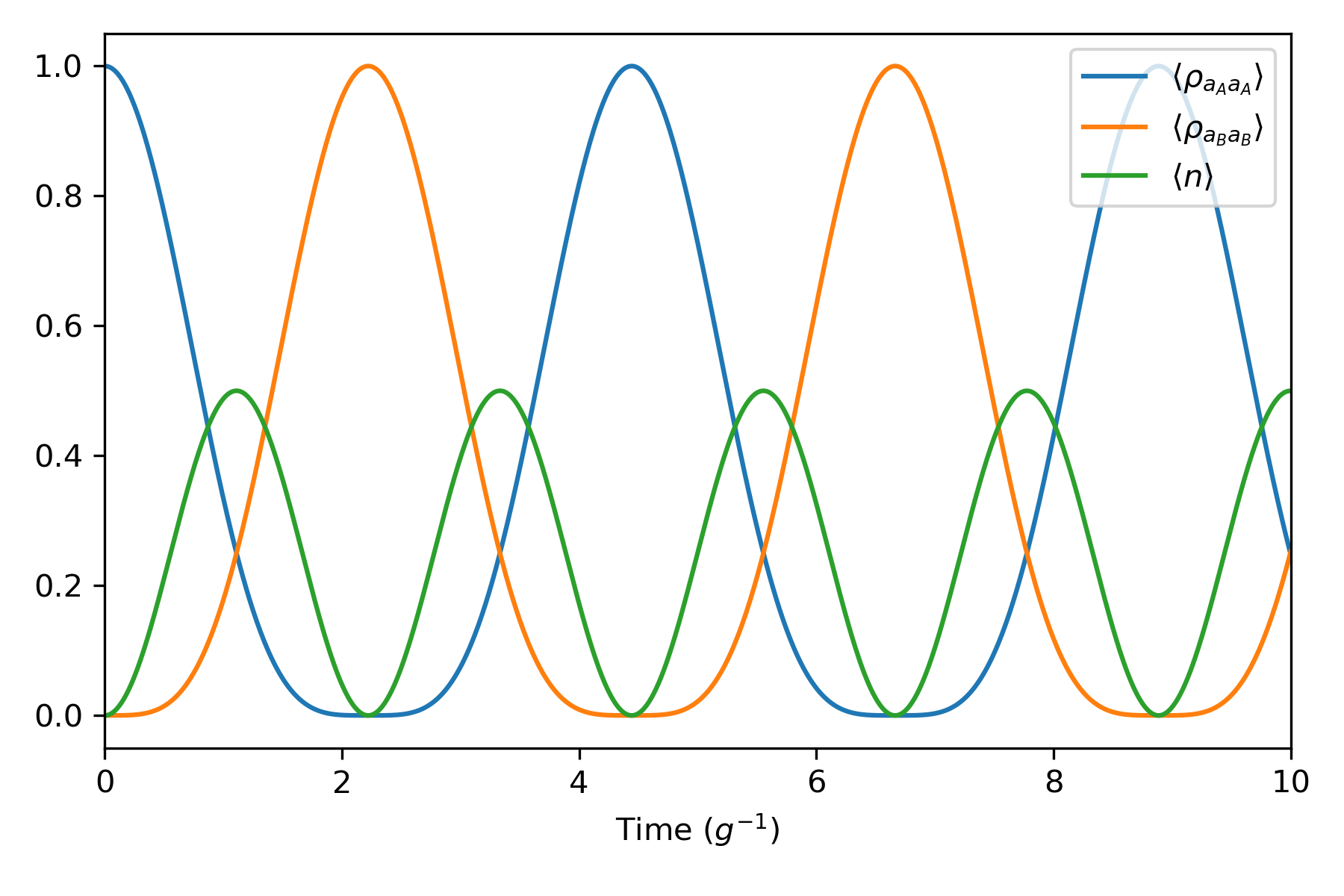 As long as no projective measurement is performed the excitation is symmetrically exchanged back and forth between the two atoms.

Firstly a remark about the termonology: Wave functions do not appear or disappear - that would contradict conservation of charge, probability, etc. What changes is the state of the system.

Wave function collapse refers to the localization of the system in an eigenstate of the measurement operator due to the interaction with a macroscopic object. Measurement operator in this case is the interaction operator between the quantum and the macroscopic systems. The macroscopic system is often called "observer", which is a misleading term, as it implies some consciousness on the part of this system, while all that matters is that it has a very large number of degrees of freedom - i.e., it can be considered in classical limit, which often implies the thermodynamic limit. These properties of the macroscopic object make the wave function collapse irreversible - in the sense that teh return to the initial state is improbable (with thermodynamically vanishing probability).

This process has been studied in many other contexts under the name of decoherence, where a system is couple to a bath with infinitely many degrees of freedom (typically modeled as a collection of many harmonic oscillators), which can be considered to be in thermodynamic state, etc. - Hopefully you see the similarity. Caldeira-Legget model, reduced density matrix, quantum kinetic equation - these are all the terms coming from this field.

Electromagnetic vacuum is one example of such a bath - the spontaneous emission can be considered an irreversible process with teh atom becoming localized in its ground state. Such a view however is applicable only when the electromagnetic vacuum satisfies the conditions of being a macroscopic object, outlined above. Thus, if we are dealing with an atom in a cavity, coupled to a few long-living photon modes, the atom will emit and reabsorb the photons, since they do not get thermalized (another way of saying that in this case photon field has a limited number of degrees of freedom and is not in a thermodynamic equilibrium). In Jaynes-Cummings model this is known as wave function collapse and revival (a rather suggestive language in our context).

Absorption of a photon can be similarly associated with a wave function collapse, if the atom "forgets" how it got excited. It is a bit more complicated in this case to define which part of the EM field serves as a bath.

Finally, note two different mathematical formalisms are frequently used for the situations where the collapse occurs and does not in absorption: Fermi golden rule and Rabi oscillations respectively.

Disclaimer I have avoided writing any equations, since most fo them would be necessarily reproducing the admirably detailed answer by @A.P.

Not the answer you're looking for? Browse other questions tagged quantum-mechanics photons wavefunction wavefunction-collapse time-reversal-symmetry or ask your own question.

28
Practically, how does an 'observer' collapse a wave function?

3
Hydrogen transition and photon behavior
1
Is there a connection between the frequency of a photon and the oscillation frequency of the atom which absorbs it?
0
Conservation of Energy in photon exchange between two atoms
2
Absorption cross section for photon with energy less than the necessary to excite the hydrogen atom
3
Why are the wavefunctions of the excited states so symmetric?
1
Friction in photon absorption/emission process