Diffractive grating by condensed water vapor on a window?

So I was looking through the window while my meal was heating up and due to boredom I puffed some air our of my mouth. The humidity condensed onto the glass and when I looked through that are at some light poles on nearby I noticed that some dark rings were appearing around the light sources (check image below). What causes this? 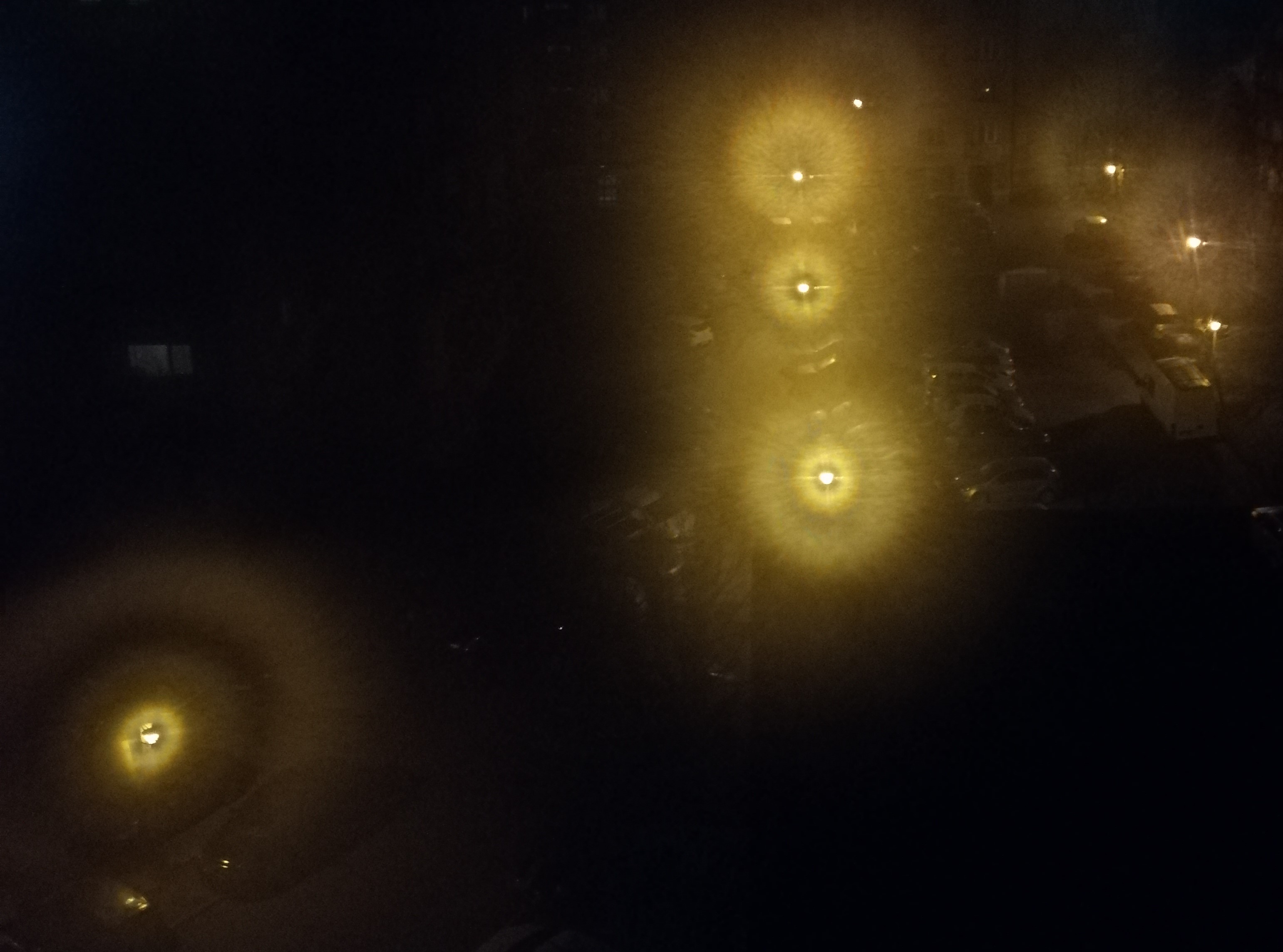 To the first case the answer is no, but there is something to it. Some weeks ago I did some experiments with a CD and the same lights and in that scenario I noticed that the image did not change in the sense that the diffractive grating on the CD generated intensity maximums at some given angles. Thus, by increasing the distance between my eye and the CD, the image "stood still" since the angles where the same. The same thing happens here also, as far as I can tell. This is why I chose the title I did choose.

The second case on the other hand did change the image. You can kind of see this in the same image I posted. The rings from the lights near the border of the image look different from the ones that are near the center.

As a different thing that I could have linked this phenomenon with is some experiment I did as an undergrad called Fresnel diffraction, which consisted of looking at the patterns that emerged from having a point-like light source that illuminates a circular aperture. Not sure in this case how to link that experiment with this situation.

This is a complicated phenomenon that depends on the size and density of the moisture droplets formed on the glass by condensation. Like a rainbow, this requires a mixture of refraction, diffraction, and total internal reflection to describe completely. The reason the pattern looks different near the edges of your image is probably because the droplets are smaller and farther apart there. I don't think Fresnel diffraction will be helpful in understanding this.

Not the answer you're looking for? Browse other questions tagged optics home-experiment or ask your own question.

22
Newton's rings: What causes the other rings?
3
Reflections in a glass of water
48
How does light speed up after coming out of a glass slab?
70
Why do beams of light (from torches or other directed sources) not extend to infinity?
24
How can my window not scramble the image of my yard?
0
What is qualitative effect of multimode laser source used with diffractive optical elements designed for single mode source?
5
Explanation for possible interference on a home mirror?
2
Why are there rings (halos) around street lights? Especially when it's foggy
2
Why is the area of the sky outside a rainbow darker?