Is there interferences between 2 electron wavefunctions?

The 2 slits experiment done with 1 electron shows interference from the "splitted" wavefunctions. EDIT: as precised in an answer, it is after many electrons goes in the experiment that the interferences appear from the spots of all electron

My question is, if we sent 2 electrons simultaneously in the 2 slits and each one can go in only 1 slit because we put a separation between the slits so we ensure that electron e1 goes in slit s1 and electron e2 goes in slit s2 like this : 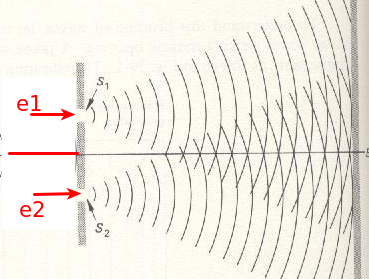 Does the 2 wavefunction of the 2 electrons would interfere each other ?

EDIT: My question received many answers and I thank you all. The answers are considering the experiment in different ways but I see some key points to take in consideration :

The easiest way to do this (for both electrons and photons) is to have the same particle source hitting both of the slits. However, if you could cook up a situation where the electron waves (or light waves) from two different sources were guaranteed to always have the same phase difference when they entered the slits, then the results would be indistinguishable from the case where the slits are illuminated by the same source. Depending on the phase difference between the slits, the interference pattern would shift back & forth. For example, if the waves entering the slits were always in phase with each other, the point equidistant from the slits would be a "bright spot"; if they were 180° out of phase, it would be a "dark spot."

If you were inject a bunch of electrons into the two slits, two at a time, and you didn't make sure that their phase differences were always the same, what would happen? Well, remember that at the screen, you don't see the full interference pattern immediately — you see a couple "flashes" on the screen where individual electrons are detected. The probability distribution of the flashes is higher where the interference pattern is "brighter", and dimmer where it's lower.

I'm thinking the two wave packets could interfere if they were identical and overlapped n the region beyond the slits.

The 2 slits experiment done with 1 electron shows interference from the "splitted" wavefunctions.

You can't observe or detect this interference by using just 1 electron. There would be one dot on the screen and no interference can be seen from that. Only if many electrons have been sent sequentially an interference pattern can be shown.

if we sent 2 electrons simultaneously in the 2 slits and each one can go in only 1 slit because we put a separation between the slits so we ensure that electron e1 goes in slit s1 and electron e2 goes in slit s2... Does the 2 wavefunction of the 2 electrons would interfere each other ?

You assume there are two wavefunctions, for each electron one. That is not how quantum theory works - if the system consists of $N$ particles, we should describe it with single wave function of $N$ variables (in non-relativistic theory), or there is single field whose state corresponds to "$N$ particles". So whichever theory we use, there is single concept that describes all the "interesting" electrons in the system.

Sending just two electrons at a time into the two slits at the same time (with error much smaller than $\frac{L}{\sqrt{\frac{2E}{m}}}$ where $L$ is distance separating the slits and $E$ is energy of the electron) is difficult but seems possible.

I did not try such experiment nor did I analyze this in detail, but intuitively I would say that if we managed to put many pairs of electrons through the slits in the above manner, we could observe interference similar to the standard two-slit experiment.

Why? For two reasons.

In addition to interference, since we have two electrons in the system at the same time, there should be some repulsion during their flight, so on the symmetry axis there should also be a decrease of the pattern intensity.

This is a very interesting idea to investigate experimentally. We are quite sure that interference of separate sources would be present for EM field, because we can observe it for low frequency sources (radio, microwaves) and by extrapolation we believe it would be present even for visible or UV radiation. But for electrons I think this is much less investigated. It would be great if somebody tried to do this experiment.

There will be little two slit interference. The wave function is an expansion of Slater determinants dominated by determinants where each electron goes through a different slit, or rather, where each orbital travels through a different slit. Two slit interference results when orbitals pass through both slits. Because of Coulomb repulsion the contribution of such orbitals is suppressed.

In my opinion there will be no interference pattern. I would be very happy to hear valid objections to any of my statements, so I can reconsider.

Edit: I am expanding on my points.

However I found this article: https://doi.org/10.1016/S0006-3495(01)76179-6 . I am not sure if this work is validated. There it appears that particles can interfere even if the path is known as long as many particles have "phase-correlated wave distributions".

Not the answer you're looking for? Browse other questions tagged quantum-mechanics wavefunction double-slit-experiment or ask your own question.