More reversible heat required to do the same work as an irreversible process?

Suppose we have the reversible isothermal process from state a to b as shown below: 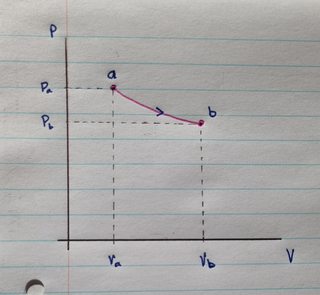 The work done by the system is simply equal to the area under the curve. The fact that this process is isothermal means that the change in internal energy is zero and so the heat transferred to the system during the process is simply the negative of the work done by the system. Now for a general process (reversible or irreversible) between two arbitrary states a and b, we have that $$\Delta S_{sys}=S_{b}-S_{a}=\int^b_a\frac{ \partial Q}{T_{boundary}}+S_{gen}$$

Any help on this issue or simply confirmation of my thinking would be greatly appreciated!

This means that the heat transferred to get from state a to state b must be less in the irreversible case than in the reversible case. But the work done is the same.

Though it depends on the details of the process, you are correct that less heat is transferred to the system in the case of the irreversible expansion process connecting the same two equilibrium states. But the expansion work done is also less.

The diagram below shows a reversible and irreversible isothermal expansion and compression process connecting the same equilibrium states.

For the irreversible compression process going from state 2 back to state 1, the pressure is abruptly increased to the final pressure, then the system allowed to come to equilibrium at state 1. In this case more heat is transferred out of the system for the irreversible process resulting in more work done on the system (more negative work). 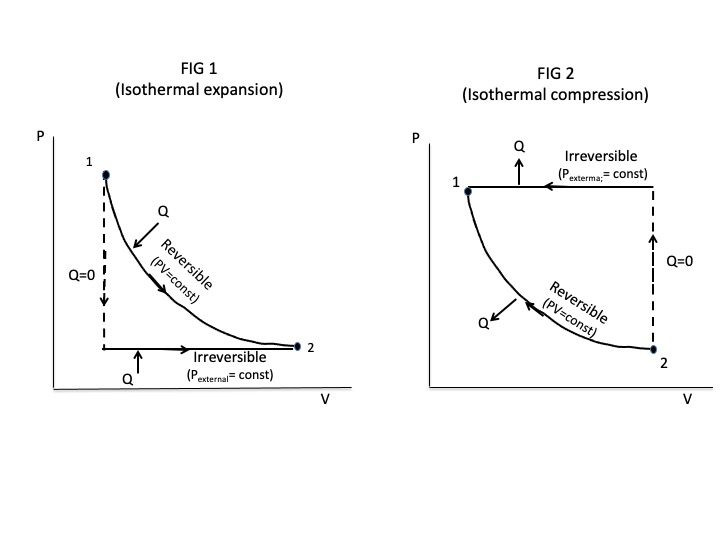 But the work done is the same

As you realized, this is not true. Work done is a path dependent process. You are taking a different path and you expect the amount to work done to change. It is hard to say exactly what has happened with the amount of work done, but that is because you have not specified exactly how you made the process irreversible. For example if you added some friction as the system expanded, then work would need to be done overcoming that friction. Since we are counting this towards the entropy of the system, this work is also being done on the system. This means that we have to transfer less heat into the system to arrive at the same final energy.

You are correct and you can also verify everything by considering an ideal gas.

where you can see that the entropy generated always decreases the heat transfer in the algebraic sense.

Consider an ideal gas for the process you've shown.

where $P_b < P_a$ therefore the reversible part $ > 0$. The irreversible part decreases the heat transfer to the system, thus decreasing the work output. Makes sense, the 2nd law puts a limit on work we can extract.

It's also useful to walk through this process for $b$ to $a$, where you'll see that entropy generation increases the heat transfer to the system, thus requiring more work to compress.

Not the answer you're looking for? Browse other questions tagged thermodynamics statistical-mechanics pressure temperature entropy or ask your own question.