How do I apply the principle of conservation of angular momentum in this case?

I came across a question:

A disc of mass 2M and radius R lying in a vertical plane which is free to rotate about a fixed horizontal axis passing from its centre. A particle of mass M is tied to a string of length 2R and another end of the string is attached to the disc as shown in the figure. If the particle is released from the shown position, then what will the angular speed of the disc as the string becomes taut will be? 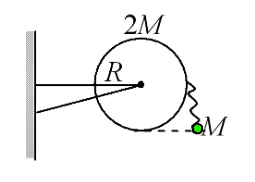 The little green thing is the particle.

I understand that it is mass* velocity *radius and that velocity was found by $1/2mv^2 = mgR$, but how is that the initial momentum? The particle starts from rest, so why is there velocity term there in initial angular momentum?

Not the answer you're looking for? Browse other questions tagged kinematics angular-momentum energy-conservation rotational-kinematics or ask your own question.