Why does water cast a shadow even though it is considered 'transparent'?

If you pour water from a container, the flowing water stream seems to cast a shadow. I am not sure you can call it a shadow, but it definitely is not letting all light through it. How is this possible and what uses can it have?

A large amount of water (i.e. if the path of light through it is long) will simply start absorbing light, as it's not completely transparent. For smaller amounts, as when pouring it from one container to another, this is mostly negligible. However, there is also surface reflection. A small amount of the incident light will be reflected off by the surface.

The much larger contribution, however, will come from refractive effects. If you look closely, there are not only areas which are darker than the uniformly lit surroundings, but some will also be brighter. The stream of water forms shapes that act similar to a lens and will divert light off its original path. The patches where the incident light would have gone without the disturbance will then be darker, the places where it is directed to instead will be brighter.

This is just to add an illustration to noah's and Ralf Kleberhoff's answers which correctly point out that refraction is the main reason.

Note that although most of the light rays do make it through the water drop, most of them do not continue on the path with the rest of the light bundle, but end up somewhere else. As a result, right behind the drop, the light intensity is much lower than it would be without the drop, whereas around this shadow it'll actually be slightly higher.

Although there are already some good answers, I'd like to give it another attempt.

Water is transparent in the sense that most of the light that enters some volume of water, also exits at the other end (unless we talk about multiple meters of thickness or lots of dirt in the water). But that doesn't mean that it passes water unchanged.

Wherever light enters water from air, it changes its direction unless the entry is strictly perpendicular to the water surface at entry point. That's called refraction, the same effect that's used with glass instead of water to form optical lenses. And refraction also happens at the exit point.

When you pour water from a container, the stream of water will typically have quite an irregular shape. So it's more than likely that every single ray of light changes its direction at entry and exit, and only a small portion will continue in a similar direction compared to entering the water stream. So, the light entering the water stream gets distributed over a much larger area than it were without the water, meaning that the average intensity is accordingly lower. And this distribution isn't uniform, but iregular because of the water stream's shape.

Now what is a shadow? It's the darker area behind some object that isn't reached by direct sunlight, while the surroundings are exposed to the sun (of course that works with any similar light source as well).

It's very similar with the water stream's shadow, it is the area that isn't reached by direct sunlight, and the refracted light after passing through the water doesn't compensate for that.

The visible difference is that the refracted light creates irregular patterns of (dim) light behind the water (because of its irregular shape), both in the "shadow" area as well as in its vicinity, because the light hitting the water isn't completely lost, but refracted.

In addition, even if the water had a completely regular planar shape perpendicular to the light source, so that the light rays continue in exactly their original direction, you'd still see a "shadow" area less brightly lit than its surroundings. And that's caused by reflection, as, when crossing a media boudary, some part of the light doesn't enter the other medium, but gets reflected backwards.

I guess some light will get reflected at the interface air-water, which will lower the intensity of light through the stream. That and possibly lens-like phenomena which leads to a non-uniform distribution of light intensity on the other side.

The fact that you can see water at all means it's not completely transparent. Since not all the light goes straight through, there will be a shadow.

The meaning of "transparent" is that you can see through the object and light can go through it, however, the light can't smoothly pass through the object. It is called Refraction which means that light bends as it goes through water this bending of the light can create a illusion where there may be a shadow BELOW the glass of water but the actual light going THROUGH the water is refracted into a different direction which can create the shadow which is not cast by the water.

"There are two reasons. The first is that what you're seeing as a "shadow" is not really so in the normal sense of the word. Water refracts light which causes it to change direction which give the illusion of shadows." Source: Google

At the air-water boundary, most light is transmitted through, but a small amount is reflected. When you pour water from a container, it usually mixes with air and forms a bunch of bubbles. This creates a lot of air-water boundaries along the straight path of light, which results in significantly more reflection, with the reflection directions being chaotic. The net result is that light scatters when passing through turbulent air-filled water. 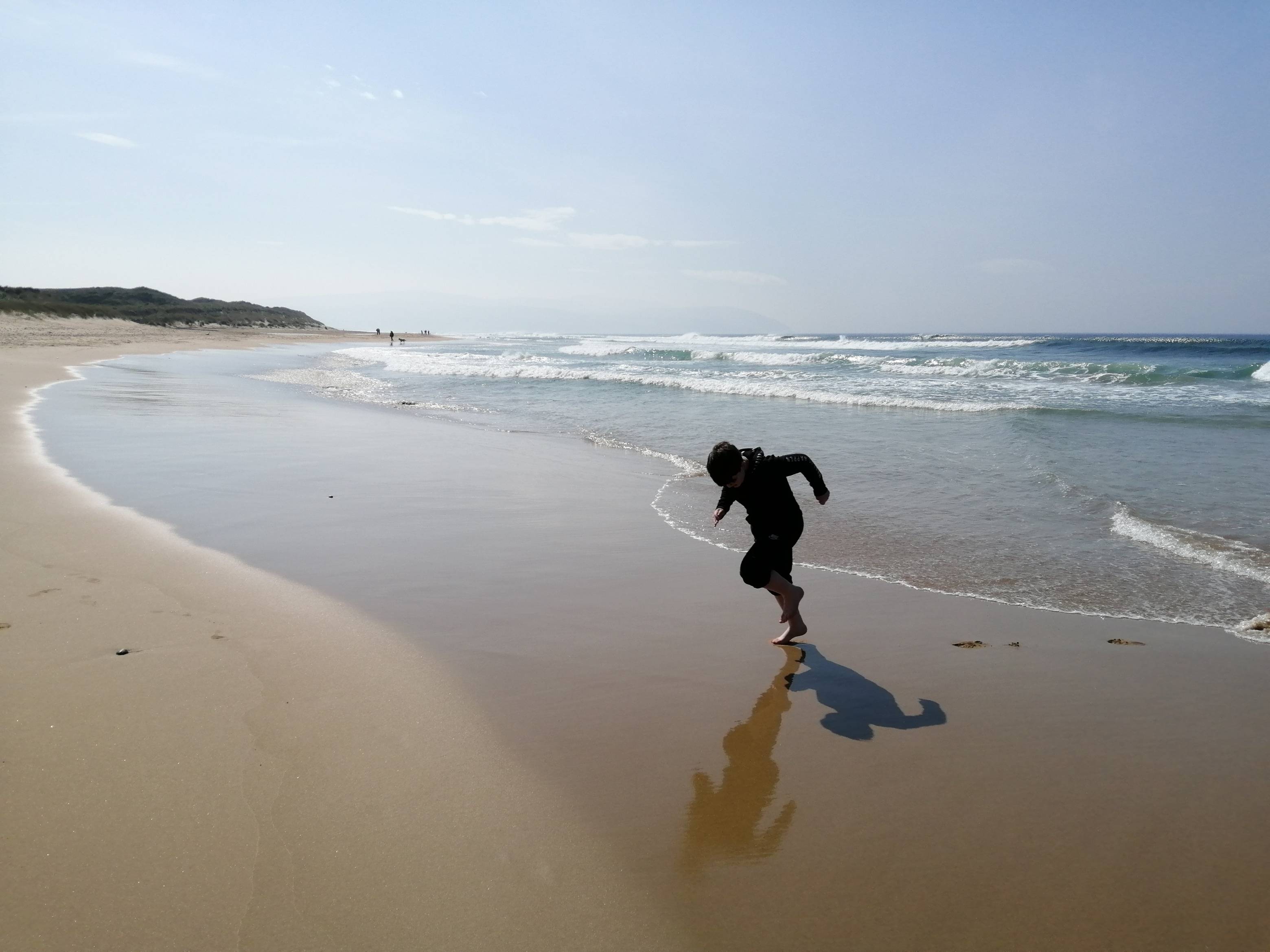 No scientist but this image I took in 2019 shows a double shadow from the sun, one normal and the other refracted in water somehow

Not the answer you're looking for? Browse other questions tagged optics visible-light everyday-life water shadow or ask your own question.

3
Why does a white object lit by a blue light cast an orange shadow?
3
How does infrared light behave through water?
1
Horizontals in a grid do not cast shadow while verticals do. Why is this?
3
Why does air get trapped below water pouring into a glass?
8
Why is the center of a torch beam visible even through an opaque body like my finger?
1
Is the shadow cast by an object hit by sunlight a sharply defined shape?