There are two ways to orient the toilet paper: "over" (left image), "under" (right image).

Each has it's pros and cons. For some reason, it's always easier to tear off the paper in the "over" orientation even though we apply the same force thus same torque. I assume these rolls are almost perfect cylinders (no excess of mass in one orientation compared to other) thus they have the same moment of inertia (degree of difficulty on changing the angular velocity of the object around the longitudinal axis of the roll) therefore both ways should be equivalently easy but it's not.

I wonder if any of these above conjectures are true or if there's a more physical explanation why it's easier to tear off the toilet paper in "over" orientation compared to "under".

I'll propose a theory, and I'll describe an experiment I did to test it. Both suggest that the "over" configuration is better, at least if the goal is to make the squares easier to rip off with one hand without making the roll spin out of control.

Please don't use this post as ammunition to defend a preference.

As rightly emphasized in several good comments (moved to chat), the specific issue addressed in this answer is not the only issue or even the most important one, and it assumes specific conditions that probably don't represent most real-world situations. I only posted it because I thought the experimental results were amusing. After seeing how much attention this answer has been getting, I decided to add this terms-of-use clause in case the answer's lighthearted intent wasn't already clear from the writing style. :)

That matters because when the toilet paper is in the "over" configuration, you can tear off a square by yanking it straight down. Since the top of the hole is already in contact with the axle, the roll's resistance to the yank is immediate, and the square rips off easily.

In contrast, when the toilet paper is in the "under" position, the loose square is hanging close to the wall. In that case, yanking straight down is hard to do without scraping your hand against the wall. We can get around that by yanking at an angle (or horizontally) instead, but then the roll's resistance is not so immediate because the opposite side of the hole is not in contact with the axle when the yank begins. The roll must move laterally to bring the opposite side of the hole into contact with the axle. That delays the rip and increases the tendency for the roll to spin, which tends to wind the paper up around the roll in addition to (or instead of!) ripping it off.

I tested this by removing the axle from the fixture and holding it in one hand while using the other hand to yank on the loose end of the paper. I tried all combinations of the following options: 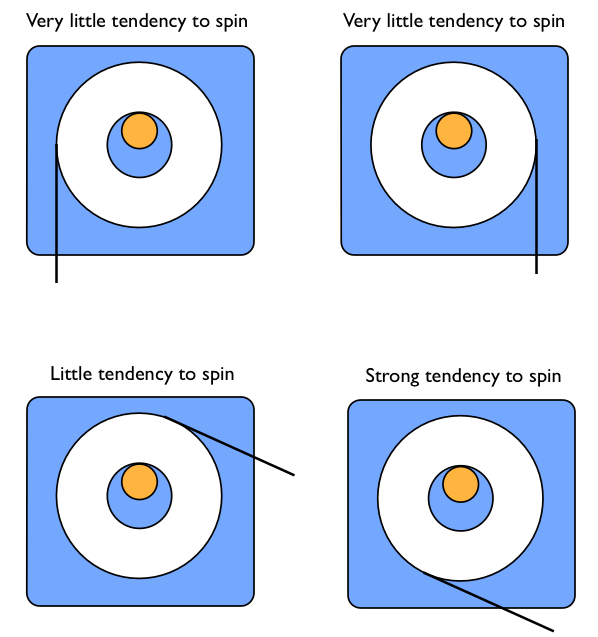 Other things to try

Disclosure of conflict of interest

I've always preferred the "over" configuration. I tried to conduct the tests fairly, because I really was curious, but I suppose my prior preference could have had some subconscious influence on how I did the tests.

I don't think I need to explain the physics of tearing something but there are two givens:

Given that if you have the toilet paper under (for righties or lefties) your hand will be further from the pivot and you will not be able to tear as fast.

The under presents someone with having no flexibility in allowing a one hand tear. This is surely where magazines get dropped on the floor and cell phones broken.

Applying the same force doesn't at all have the same result.

What we might term the "restraining" hand applies pressure to roughly the same central point on top.

By contrast the "pulling" hand works almost straight down in the "over" scenario and at a very different angle when "under."

The hugely different result will be largely proportional to the angles…

What is often missed in such debates, is that a commercial toilet paper suspension usually looks like in the image below. The metal lid on the top actually serves to prevent the roll from rotating, while one is tearing the paper.

In absence of such a lid, one has to block the roll either by one's hand/fingures (typically in the over orientation) or against the wall (more suitable for the under orientation). 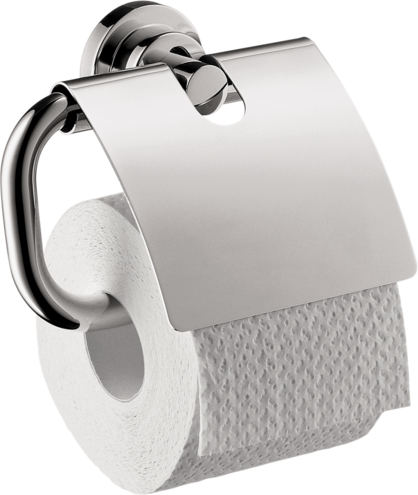 The thing that makes the 'over' position preferable over the 'under' position is the difference in force applied to either pull down more squares or to rip the selected number of squares off.

If that difference is very big, the operation becomes more complicated.

In the under' position pulling the paper straight down will allow more squares to come off the roll very easily, since it does not generate any friction.However, in order to rip the paper off, one has to actually yank it pretty fast to make the paper tear, before the momentum is reached that makes the roll spin like mad and release an ever increasing number of unwanted squares to end as serpentine on the bathroom floor.

Thus we can conclude that the 'over' position generally allows for a one handed operation, whereas the 'under' position forces the use of two hands to prevent things from getting 'party-like'.

This is where it abruptly stops being just funny and becomes dead serious !!

The 'over' position does not only allow for one hand operation, it also ensures that the user ONLY touches the squares he or she uses. In the 'under' position, this for reasons mentioned above is not the case, making the 'over' position considerably more hygienic. In times of the Corona pandemic, that makes a significant difference.

A study performed by the university of Vienna attempted to find an explanation for the fact that while way more women get infected with the virus, their death rate is considerably lower than that of men. Whilst processing the data available, it was noticed that these differences were not consistent through the population, but primarily concerned employed women. Though no conclusive evidence was found, this difference suggests women having an increased chance to get infected due to their use of toilet paper after peeing, risking infection through their genitals, rather than through their respiratory system. Though this increases the chance of getting infected, it decreases the mortality. The disease doing most damage in the lungs, infection through genital contact gives the body a chance to start defending itself against the virus long before it even reaches the respiratory system.

PLEASE NOTE !! The resulting death rate is still way too high to ever consider intentional infection through the genitals as a preventive therapy. It is still better to just not get infected at all.

Considering this, using the 'over' position may very well save lives.

Not the answer you're looking for? Browse other questions tagged newtonian-mechanics forces classical-mechanics torque moment-of-inertia or ask your own question.

24
Equations for bent paper
0
If a paper disc is cut into a spiral, does its moment of inertia change?
5
Uniform circular motion dilemma
0
Instantaneous center dilemma
6
Centrifugal Force Dilemma
1
Dynamics in a circular disc dilemma
1
A conceptual dilemma in pseudo force