Would Foucault's pendulum work on the moon?

I am taking a course in introductory general relativity and came up on this question, which a google search didn't answer. The rotation of the Earth can be measured using a Foucault pendulum. The moon also rotates to always keep the same side facing the Earth, and it seems therefore that we should be able to measure this rotation using a pendulum on the moon. However, I have just learnt that a particle falling freely in a gravitational field is really following a geodesic curve through space-time. This got me wondering whether the apparent rotation of the moon is an artifact of the curvature of space-time, or if it is a real physical effect. I think my question can be phrased as in the title - would a Foucault pendulum rotate on the moon?

Another way of phrasing the question which may be clearer: If a (non-rotating) satellite were held still above the surface of the Earth, and then given a sudden sideways kick, putting it into orbit: would its orientation remain fixed relative to the stars, or would it rotate to always face the same side towards the Earth? 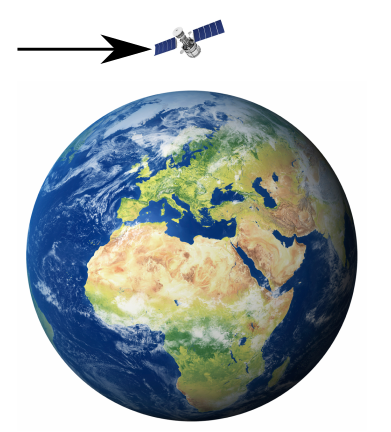 Simplifying assumptions: The Earth is a perfect gravitational point source, and the orbits are perfectly circular.

(This wasn't always so. It can be reconstructed that the Moon previously had a faster rotation rate than it has now. Celestial bodies have a gravitational interaction (involving tidal effect) that tends to slow rotation down. When the Moon rotation was slowed down to once per month the rotation of the Moon went into tidal lock.)

Any satellite orbiting any celestial body can have any rotation rate of its own.

Some of the Earth orbiting artificial satellites have a design where the satellite extends a pole after it has inserted into orbit. The purpose of the pole is to facilitate tidal lock of the satellite.

There is no connection between tidal lock and relativistic physics. Tidal lock is accounted for in terms of Newtonian dynamics. There is a theoretical relativistic correction, but the difference is so small that it's totally negligible.

Foucault's pendulum would, indeed, work on the Moon - though because the rotation is much slower (a period of about 2360 ks versus about 86 ks), the pendulum will also precess that much slower. (It will also swing with a longer period, due to the reduced gravity, but that's a different matter.)

Regarding your question about whether the rotation is "real" or not in the context of general relativity, yes it is real: Foucault's pendulum is, in fact, not a free-falling body in a gravitational field. As a pendulum, it is anchored at one end, and a string connects the pendulum bob to a hook. This string exerts a real force on that bob, and if it's moving under a force, it cannot be in free fall, by definition. As the Moon rotates, the anchored tip of the string is steadily dragged ever so slightly, which pulls the bob sideways which, in turn, causes the shift in its swinging motion.

But it doesn't work that way. I think a roughly correct way to get the coordinate system that follows the moon is to imagine replacing the moon with a family of small particles. The ones nearer the earth orbit faster, and the ones farther away orbit slower. But the closer they get to the particle at the center of where the moon was, the closer they get to moving at the same speed. The coordinate system comes from taking the limit, and it will not have an axis tangent to the orbit, nor will it keep an axis pointing towards the earth. It will in fact maintain the same orientation as it orbits.

Really, the best way to think of the geodesic path is to drop one of the space dimensions and model the earth as a disk for each slice of spacetime, combining them to make a cylinder running from the past to the future. Then the geodesic path of the moon is a spiral around that cylinder, and the full coordinate system has a $t$ axis, an $x$ axis, and a $y$ axis, plus a $z$ axis that we are ignoring in this mental model with 2D of space and 1D of time. In general, when you project from spacetime down to space, the axes of the coordinate system won't turn to follow the direction of the track. They'll keep the same orientation like one of those gyroscope balls some people used to have in their cars.

Yes, it would work. Of course, you should take into account that gravity at the Moon's surface is only 1/6 of the value on Earth and that a Moon (sidereal) day is 27 Earth days.

Not the answer you're looking for? Browse other questions tagged newtonian-mechanics rotational-dynamics reference-frames moon coriolis-effect or ask your own question.