Why, exactly, does temperature remain constant during a change in state of matter?

Intermolecular forces between molecules are either intact or broken. There is no in-between. Therefore, the change from intact to broken is instantaneous.

Applied heat energy increases the movement of particles in a substance, which in turn increases its temperature. When movement reaches a critical point, intermolecular force is overpowered, and a change of state has occurred.

My question: Where does that energy go? It’s not increasing temperature; so what is it doing?

My counterargument: Intermolecular forces between molecules are either intact or broken. There is no in-between. Therefore, the change from intact to broken is instantaneous.

I don't think this is a great argument, as bonds are forming and breaking all the time in real materials at finite temperatures. Liquids have some fraction of broken bonds compared to the solid state, and the bond locations are fluctuating constantly. This certainly seems like an "in-between" to me.

The phase with the lowest Gibbs free energy is always the equilibrium state, as mediated by the tradeoff between increased bonding and increased entropy. The higher-entropy phase is always the higher-temperature stable phase. For the typical single-component system discussed here, only at one temperature can two phases have the same $G$: the phase-change temperature. This is why we see a sudden transition at this temperature.

We can visualize this behavior in the following image. The lowest curve is the most stable. On the left side, the curves are more shallow because the slope $S$ decreases with decreasing $T$. But the larger-entropy phases always win out with increasing temperature because of that $-ST$ term. If the liquid curve were a little higher, we'd have a material—like carbon dioxide, for example—that doesn't exhibit an equilibrium liquid phase (at least not at this pressure) and sublimates directly from the solid to the gas state upon heating.

Now let's get into why the temperature seems to stay constant during a phase change. It doesn't, in fact, but it is true that a only a very slight amount of undercooling or overheating can be sufficient to trigger a complete transformation from the less stable phase to the more stable phase. This discussion follows Porter & Easterling, Phase Transformations in Metals and Alloys.

Consider a slight overheating past one of the transition points in the diagram above. The volumetric driving force for the phase transformation is the reduction in Gibbs free energy, $\Delta G=\Delta H - T\Delta S$, where $\Delta$ compares the state values for the two phases (i.e., $\Delta H=H_1-H_2$, for example, where phase 1 is more stable than phase 2 in this case). Close to the intersection, $\Delta H$ is just the latent heat $L$ of the transformation. In addition, we know that $\Delta G =0$ at the transformation temperature $T_t$, so $$\Delta G = L\left(1-\frac{T}{T_t}\right)=\frac{L\Delta T}{T_t}.$$ Thus, the driving force for transformation is modeled as increasing linearly with increasing overheating.

Now consider the benefits and penalties of nucleating a new phase in the form of a spherical cluster with radius $r$. The benefit is the reduction in Gibbs free energy $\frac{4}{3}\pi r^3\Delta G$. The penalty is the new interface area $4\pi r^2\gamma$, where $\gamma$ is the surface tension of the new phase with respect to the old phase.

For a small surface tension $\gamma$ (as occurs with heterogeneous nucleation), try plotting the nucleation rate $N=f\exp\left(-\frac{A}{(\Delta T)^2}\right),$ where $A$ is a small number. You'll see a tremendously rapid increase in nucleation for slight overheating because we're applying the exponential function to a squared temperature difference: 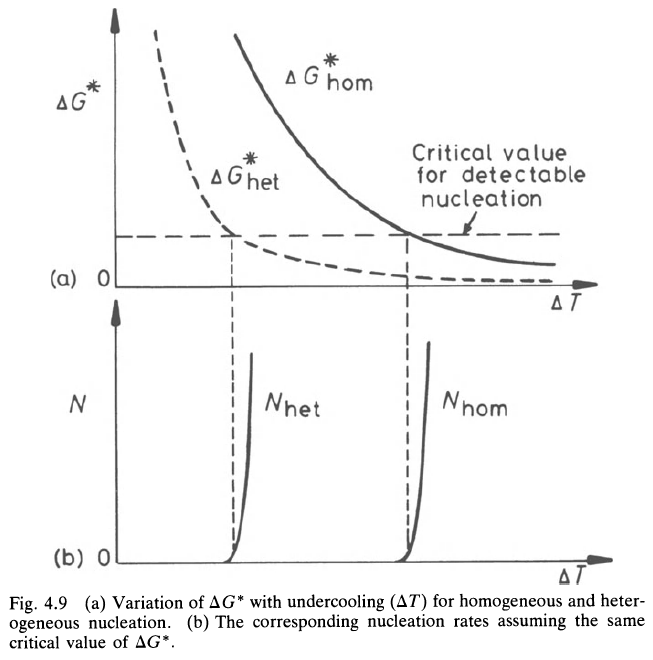 This is ultimately why phase transitions seem to occur entirely at a single well-defined temperature. That's not quite the case, as shown above, but it's a reasonably good approximation.

In order to undergo a phase change from a solid to liquid, or liquid to gas, the heat added needs to cause molecules to move farther apart from one another, in opposition to the intermolecular attraction forces, which in turn means it increases the internal potential energy of the substance. Thus the heat added increases internal potential energy and not internal kinetic energy (an thus not the temperature)

In order to break the bond, the movement of the molecules needs to be intensified, which would increase the temperature of the water. That’s why I think that there should be no period of constant temperature.

Fundamentally, temperature is not really about the "intensity of movement" of the particles in a system. This is the reason behind your confusion.

When two systems (or two phases within a system) are in thermal equilibrium with each other, we define them to have the same temperature (regardless of what is actually going on at the microscopic level within each system). When one system has a tendency to lose heat to the other, the former, by definition, has a higher temperature than the latter. It is only because temperature is defined in this way, that a thermometer has the ability to reliably measure temperature.

Water that is at its boiling point is in equilibrium with water that has just boiled. If the water continues boiling, the heat that makes that happen is not coming from the steam, but from the heating element. If you remove a kettle from the stove, you have a situation where the liquid water will not lose heat to the steam nor will the steam lose heat to the liquid water. The water will not continue to boil, since there is no longer energy input for breaking bonds. The steam will also not spontaneously condense into water, because doing so would release energy and there is nowhere for that energy to go. So the proportion of the water in the system that is liquid, and the proportion that is gaseous, will remain constant unless the system is interacting with its environment somehow. Internally, the system is at equilibrium. This proves that the liquid water and the steam have the same temperature, even though the steam has more energy per molecule than the liquid water.

The change from intact to broken is instantaneous, but for each bond. Phase changes for a bulk of material takes time. While it is happening, it is the potential energy not the kinetic energy that is changing.

For any region where the temperature starts to rise $\delta T$, that energy is transfered to not yet transformed neighborhood. At least for phase change near to equilibrium.

In order to break the bond, the movement of the molecules needs to be intensified...

This is incorrect in the sense you've stated.

With every bound system is associated a binding energy, which, when supplied in appropriate form to the system, unbinds the system. For example, a satellite orbitting the earth is bound by gravitational energy. In order to unbind the satellite significant energy would need to be added to remove it from orbit. However, this does not imply that the satellite must be moving faster (implying higher temperature by analogy) once the bond is broken.

Let's look at this from the energy side:

(It's not as linear as I'm describing things here, but the details don't change the picture significantly.)

Note that the entire thing is completely independent of the mechanics of the phase change; all that matters is that one phase has a different energy content than the other, and that the material can partly undergo the phase change.
(This means that your question does make sense for systems that cannot change phase in a piecemeal fashion but must do it all at once. I am not aware of any example, but I could imagine that some large quantum-entangled systems could expose such behaviour.)

This mechanism applies to all phase changes: superheating, subcooling, crystallization, crystal restructuring. It is also independent of whether the phase change is induced by heating, cooling, (de)pressurizing, external magnetic field, or whatever: At the moment of the phase change, whatever is causing it will have its effect absorbed into the phase change until everything has changed, then the normal effect will resume.

I also don't like explanations on a broad energy level. They explain how the bookkeeping works, but not really why that's the right way to do the bookkeeping.

So consider things on a molecular level. Have you ever tried to throw a loose wad of tape into the trash, but it stuck to your hand a little and only got halfway to the trash can? The breaking of bonds during a phase change is like that. The molecules are oscillating rapidly in a deep potential well. Every so often, one gets jostled hard enough to escape the potential well, but it loses speed on the way out, so that it is moving slower when it hits another molecule of the surrounding liquid. Meanwhile, the remaining molecules, instead of bouncing back off their fast-moving neighbor when they approach it, are given a tug in the direction they were moving that has the effect of softening their rebound caused by the attraction of their neighbors. So molecules on both sides are now moving more slowly. This process can happen in reverse too, and at the melting point both are basically equally likely. So adding heat just makes more molecules detach, compared to the number reattaching. Only after melting is complete and there's basically no more reattaching does the average speed go up.

This explanation, I should say, is inspired by Feynman's description of the atomic hypothesis:

that all things are made of atoms — little particles that move around in perpetual motion, attracting each other when they are a little distance apart, but repelling upon being squeezed into one another.

The bonds themselves represent a decrease is chemical potential energy. The energy needs to go into this to break it. As a metaphor consider you have a ball in a grass field. If there is a hole in the field and the ball goes in it,it will come to rest at the bottom of the hole and won't leave. For you to put in back in the field where it can roll around takes adding gravitational potential energy. If you kick the ball in the hole it will come out with the kinetic energy of the kick minus the amount needed to get the ball out of the hole.

Not the answer you're looking for? Browse other questions tagged thermodynamics temperature phase-transition states-of-matter or ask your own question.