What is this atmospheric escape chart actually showing?

The wikipedia article on atmospheric escape has this chart: 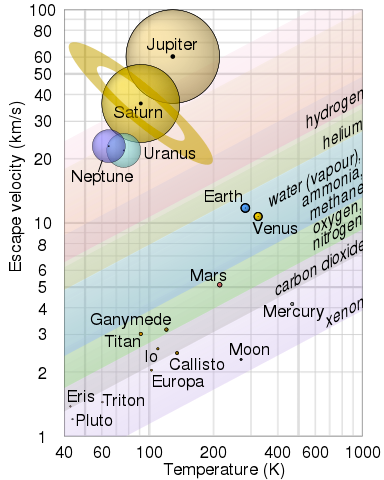 It all seems plausible enough... for a body to retain an atmosphere of a gas, the velocity of gas molecules in its exosphere must be mostly below escape velocity, implying either plenty of gravity, or a sufficiently cold atmosphere. The solar system bodies end up in appropriate places, and their atmosphere is kinda described OK. It'll do as a handwavy overview.

What I'm having trouble with is how the values of the gas "escape velocities" were calculated. The hydrogen line looks to have a value of about ~18km/s at Earth's temperature, for example. The wikimedia page includes a reference to [these lecture notes3], which mention the Maxwell-Boltzmann speed distribution and come up with this, by working out the temperature at which the most probable speed in the distribution is equal to the planetary escape velocity:

I can't get any meaningful value of T_esc that looks anything like the lines plotted on that chart, and having the average of that speed distribution greater than escape velocity seems to require ridiculously high temperatures... it seems like an entirely wrong way to go about the problem.

On the reasonable assumption that I don't know what I'm doing, can someone tell me how a chart like this could be created? Is it even possible to handwave a very approximate answer to "will Jeans escape deplete this gas in under a billion years, give or take" just by supplying surface temperature and escape velocity? Was it actually done by more nuanced application of the Maxwell-Boltzmann distribution, and neither the original author of the lecture notes nor the creator of the chart thought to mention this?

Note only a small percentage of the hydrogen escape specifically the ones with the higher velocities. The leftover distribution after these particle escape is no longer a boltzmann distribution and is therefore not in thermal equilibrium. It will change gradually to try to become a boltzmann distribution again. This then allows more particle to be faster and this cycle acts as a slow leak over time I believe at an exponentially decaying speed. This is likely what the bands are trying to show i.e. that a planet just cold may still have these gasses for a decent amount of time.

This is called the jeans escape process.

I've located this suspiciously similar looking chart from chapter 5 of Atmospheric Evolution on Inhabited and Lifeless Worlds, which is available in PDF form here. 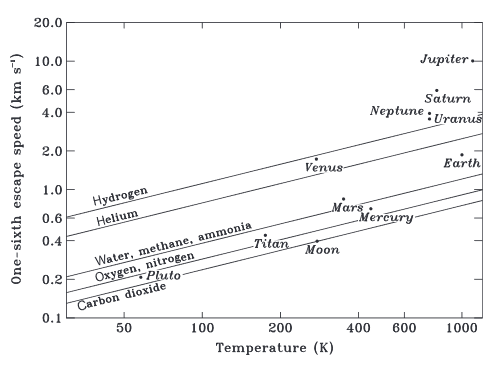 It has a number of important differences:

I'm still none the wiser as to the source of the numbers on the original, prettier chart, but it seems like this is a more correct presentation of the same information. It is possible that the author of the new chart, when they changed the y-axis scale from one-sixth escape velocity to just escape velocity, they scaled up the gas lines by a factor of 6 too (or forgot to add an appropriate scale for gas speeds on the right of the chart). That might explain the source of error.

(I'll leave this answer up but unaccepted for a while, in case someone is able to cast any light on the original chart)

Not the answer you're looking for? Browse other questions tagged newtonian-gravity atmospheric-science gas or ask your own question.

7
Estimating hydrogen loss by Jeans escape
3
Escape velocity for hydrogen molecules
55
Why doesn't hydrogen gas exist in Earth's atmosphere?
0
What is the speed of air molecule?
2
Is our atmosphere declining?
1
Hit rate of molecules on a wall
1
How does one regain the Maxwell-Boltzmann distribution using relative velocity and extensivity?