We are able to look directly at the sun near sunset and sunrise, which clearly demonstrates the fact that our atmosphere attenuates visible light. Let's imagine it follows the typical attenuation profile.

The effect of the "soft" sunlight is then predicted as a result of the fact that the mass-thickness of the atmosphere between our eyes and the sun diverges fairly fast as the angle to the sun falls to zero degrees above the horizon.

Let's say that a person is standing on (perfectly spherical) Earth, with their eyes at a known elevation, looking at the sun which lies at a known angle above the horizon. What is the expression for the mass-thickness of air in that line of sight?

The reason I find this non-trivial is that I can't figure out if the density profile of the atmosphere should matter or not. You could reduce it to simple geometry and get an answer, but is there a coherent argument for that being correct? With a clear expression, I'm actually kind of curious if you could measure the mass-attenuation coefficient with just a digital picture. The sun's intensity starts out constant over the circle, and you know the angle between the top and bottom of the sun exactly. So if you could extract intensity data over the vertical diameter maybe you could then do a least-squares function fit to extract out that attenuation coefficient, and even do it for each of the 3 colors. I don't plan on doing that, but it would be a cool science project.

First of all, atmospheric attenuation in the visible region is primarily due to scattering, not molecular absorption as in the infrared and microwave regions. This is perhaps not that important to your question, but a good thing to keep in mind. The ligth doesn't disappear, it only changes direction.

If you have the density profile of the atmosphere, let's denote it $\rho(h)$, where $h$ is the height above sea level, you can calulate what you call mass-thickness, (I will call it slant mass column and denote it $C$), using this integral:

where $\theta_0$ is the elevation angle of the sun and $R$ is the earth radius. These formulas are for an obeserver located at sea level.

This assumes that the light travels straight through the atmosphere. This assumption works reasonably well for high elevation angles, but for lower angles (think sunsets) you have to take atmospheric refraction into account and perhaps also some additional scattering effects.

Your digital camera experiment might work in theory but it will perhaps not be as easy as you would like. First of all you need to account for refraction when calculating the slant mass column as I explained above. Refraction is wavelength-dependent so you will have to do it for each color. Secondly, only Rayleigh scattering will be proportinal to $C$. You will also have Mie scattering due to aerosols. This will depend on the aerosol loadings in the atmosphere which will be variable. Mie scattering will also be more important for low elevation angles since a larger part of the path through the atmosphere will be in the lower parts, which have higher aerosol loadings.

I'm going to assume the atmosphere is constant density and solve the problem. We'll pick up the pieces from this assumption later. Next, I'll trash the specification that the observer is at a nonzero height. Not a big deal, just put the camera on the ground.

Additionally, we assume we know the angle of sight. That gives enough information to formulate the triangle with the law of cosines. 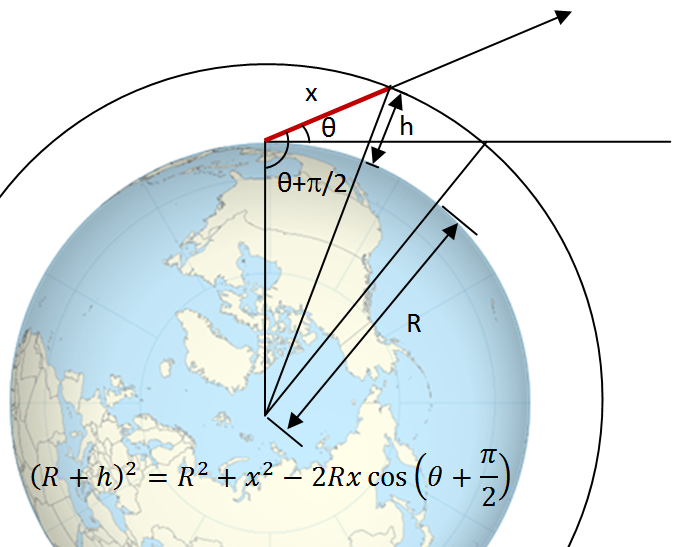 Now we have enough information to plot this.

Now you will say, "but the atmosphere isn't constant density". I think I've come up with a good counter argument.

Let's say the density is half of the sea-level value. That will increase the height of the atmosphere by a factor of two. So I resolve the above equation with that new number. It's not exactly linear with $h$, but we will find that the value of $x$ is about twice its former value. But then we multiply by $\rho$ which is half the sea level value. That means that we arrive at our original number! In fact, I plotted this for all densities. This is for example purposes, so I supposed an arbitrary angle from the horizon of 0.1 radians.

Probably less than 1/20th of the atmosphere is below a density of $0.1 kg/m^3$. Maybe the above graph is sufficiently flat in that range? ...but maybe not. The method isn't as good as I had hoped. The very high altitude distribution of our upper atmosphere really does call for a more exact accounting, but since the pressure falloff is exponential I'm sure that would be difficult.

Not the answer you're looking for? Browse other questions tagged visible-light sun scattering earth atmospheric-science or ask your own question.

4
Sunrise/Sunset on a planet with an A-Class or B-Class Star
25
Why isn't the sunset/sunrise rainbow-colored
41
Why is the sun brighter in Australia compared to parts of Asia?
2
Why stars are white? According to Rayleigh Scattering
3
Why is the western sky yellow after sunset?
12
Why does sunset spread over the horizon?