Why does the bullet have greater KE than the rifle? [duplicate]

Ask Question
Asked 7 months ago
Active 7 months ago
Viewed 4k times
15
$\begingroup$
This question already has answers here:
Why does shooting a handgun accelerate a bullet to deadly speed without injuring the gun user's hand? (6 answers)
Closed 7 months ago.

A rifle is fired, and the bullet moves much faster than the rifle, and momentum is conserved.

My question is whether the kinetic energy of the bullet is greater than the kinetic energy of the rifle because the mass of it is smaller, therefore the force acting on it (for the same time it acts on the rifle) results in greater acceleration, and thus greater final velocity (basically, the change in momentum needs to be equal and in opposite direction to the rifle, which has greater mass). On the other hand, kinetic energy depends on work done, which is force times displacement. Therefore, we can say that the force acted on the bullet for a greater distance traveled.

Are these explanations stating the same thing, or are they causally different? (From the expression of the momentum formula as m. dx)

(Notice that from this perspective we can only extract the ratio between the two energies. The absolute values would be given by information about the energy generated by the gunpowder. But that energy is partitioned between bullet and rifle according to momentum's conservation.)

(Again, we only know the ratio as we don't know the value of $F$ - we just know that because of action-reaction it will be the same in magnitude on both bullet and rifle.)

So a simple mass difference makes it so that the bullet accelerates more hence gets more kinetic energy in the same time.

To this you need to add the fact that:

But from a purely momentum conservation point of view you can understand that the bullet, just by being smaller, absorbs a bigger part of the total energy and therefore moves at high speed with respect to the rifle.

In effect you are asking what the nature of kinetic energy is.

After the rifle has been fired the bullet and the rifle have the same momentum - in opposite direction. In that sense we can say that momentum is equally shared.

To get a closer look at what kinetic energy is I propose the following demonstration: you set up a series of ribbons that can be snapped relatively easily. Think the kind of ribbon at the finish line of a runners event. The ribbon is strong enough to span the width of the road, but it snaps easily.

Let's say you set up a series of ribbons like that, spaced equally. You set up an object with an initial velocity, such that that mass is decelerated by stretching ribbon after ribbon. For simplicity assume that as each ribbon snaps the object is in touch with the next ribbon so that the deceleration is fairly constant.

Let's say the deceleration is 1 unit of velocity per unit of time.

That is: the object with twice the initial velocity will snap four times as much ribbons.


That is what is expressed with the concept of kinetic energy.

The more velocity an object has the more damage it will do upon hitting something, in proportion to the square of the velocity.

This quadratic relation comes from the fact that during acceleration/deceleration the distance travelled is proportional to the square of the duration.

The bullet and rifle have the same, but oppositely directed momentum, say p. The kinetic energy of each object is $p^2/2m$. The smallest mass has the highest kinetic energy.

On a pedantic note, I assumed that the rifle was at rest before it fired. For a sensible rifle this should hold. If someone holds the rifle the mass of that person should be added and transient effects will occur. Dissipation by friction is also ignored.

Same time interval does not mean same distance. It means the same impulse which results in the same change in momentum (in magnitude ) As you say, the momentum is conserved. On the other hand, the distances travelled by gun and bullet depend on the accelerations of the two objects and these are not the same, as you already mentioned. So the work done on the bullet is much higher than the work on the gun, even if the gun is not supported by the shoulder.

Kinetic energy is not conserved when you fire a bullet. Both the rifle and bullet are at rest until the explosive in the shell provides energy to accelerate the bullet down the barrel. Momentum is, however, always conserved. If we align our coordinates with the barrel and compare the system before the shot (when the system is at rest) and just after,

It can be shown that the momentum, force and energy pictures (and their more advanced versions) are self-consistent. When a problem may be solved in many pictures, they all give the same result.

I think the easiest way to work this out is to create an arbitrary model and simplify away some of the complexities that don't directly related to the question. So Let's say we have a bullet that is 10g, a 'gun' that is 10kg. Furthermore, our very simple gun creates a constant acceleration on the bullet while it is firing: 10000m/s^2. After firing is initiated the bullet leaves the muzzle after 0.1 seconds. Also the gun is floating in the vacuum of space.

So the upshot here is that the force is equal as is the time it is applied but due to the lower mass, the bullet accelerates to much higher velocity which has a quadratic impact on the kinetic energy than the mass. This is more-or-less your first argument.

They key is on the definitions of linear momemtum $\mathbf{p} = m \mathbf{v}$ and kinetic energy $T = \frac{1}{2} m v^2$. Particullary, the fact that KE depends cuadratically on speed while $p$ depends linearly on speed.

If you write the KE in terms of linear momentum $$ T = \frac{p^2}{2m} $$ you realise KE is inversely proportional to mass.

You see that $T'$ isn't inversely proportional to mass. It could behave as crazy as you want based on your definition of KE. 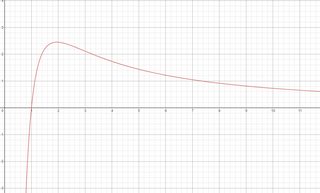 Of course, the definition of KE isn't arbitrary.

Edit: I know this doesn't answer the physical part with the correct definition for KE. Since it was already answered, I just wanted to point out this pretty trivial fact.

Basic principal of ballistic physics, Once the round leaves the barrel it begins to lose energy. Kinetic energy is energy PUT to work in motion. The bullet may have less mass than the rifle but remember the cartridge stores propellant, that's Chemical energy (Potential) Also most rifles this day have some sort of recoil management to mitigate the energy opposing delivered. The rifle weighs (depending on model) from 5-10 lbs? the energy recoil is mitigated through the body of the rifle.

25
Why does shooting a handgun accelerate a bullet to deadly speed without injuring the gun user's hand?

0
Which parameter determines how much the 'recoil' or force applied by an object hurts?
1
When is energy conserved in a collision and not momentum?
1
Conservation of energy and momentum via the continuity equation in asymmetric time and space translation
12
Will a bullet dropped and a bullet fired from a gun horizontally REALLY hit the ground at the same time when air drag is taken into account?
25
Why does shooting a handgun accelerate a bullet to deadly speed without injuring the gun user's hand?
0
Mechanics Question - Bullet fired into Block
1
Why are we applying conservation of momentum in the following question?
1
Work of the same force acting once on a moving object and once on a motionless one