Area Swept by particle under central forces is an approximation

From Kepler's second law, we infer, the conservation of angular momentum is equivalent to saying the areal velocity is constant, 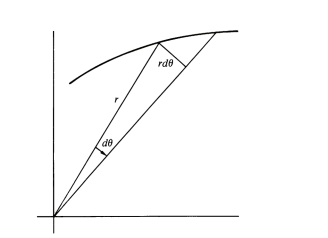 now since angular momentum is constant, we say, The radius vector sweeps out equal areas in equal times.

(1). To calculate the area element, we are taken an approximation, so how we are getting accurate results, (means we have equated it to angular momentum only after approximation and not in general)?

(2) Is Kepler's second Law true up to some approximation? Because at the end we have just cared about the approximated triangle, but there remains a smaller region (as depicted in the figure) that we have not included. And at the planetary level, our approximation will not work?

(3) Can I say that it is not an approximation and I have missed something?

End Note: The 3 questions are actually 1 question, just written in points for the convenience of reader. I know the policy.

This is just the standard trick of calculus. This looks like an approximation for finite $\Delta \theta$, but as you divide the area into smaller and smaller pieces, the error goes to zero. The same reasoning allows you to write the area under a curve in terms of integrals.

Kepler's second law is not an approximation. Within Classical Mechanics it is an exact result provided two bodies interact with Newton's gravitational law.

The key point is that your equation $(3)$ is a controlled approximation for the area swept by the position vector. By "controlled" I mean that it is possible to show that the error is at least of the order $d\theta^2$. Therefore, since the evaluation of a finite area requires to integrate $dA$ between an initial and a final angle, the first-order approximation for $dA$ contains the information to get the exact result.

Not the answer you're looking for? Browse other questions tagged newtonian-mechanics angular-momentum conservation-laws orbital-motion calculus or ask your own question.