Does an empty refrigerator require more power to stay cold than a full one?

Given that everything else is equal (model of fridge, temperature settings, external temperature, altitude), over a given duration of having the door closed, does it require more electricity to cool an empty refrigerator AND maintain that temperature, than a full one?

The two "no" answers you've already received are correct for all practical purposes.

All heat transfer depends on $\Delta T$. The greater the difference in temperature between two systems the faster heat will flow. When you add heat energy to a full refrigerator, the system has greater heat capacity so the temperature changes more slowly and $\Delta T$ is greater than it would be in an empty refrigerator. If the refrigerator could keep the temperature absolutely constant at all times the difference would not matter. Because a real system cools and then stops cooling in discrete steps, a loaded refrigerator acquires heat from the environment slightly faster because it stays colder for longer.

The difference is so small though that I'm sure it couldn't be measured.

But, if the refrigerator only cycles on at a specific temperature there will be no difference. I wrote a numerical simulation to test this. Here is the plot: 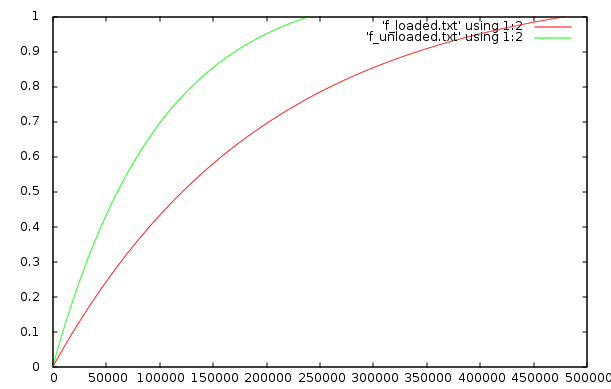 The simulation is a simplified, idealized, purely numerical one, hence the lack of units. The Y axis is temperature and the X axis is time. The red curve is the loaded refrigerator and green curve is the unloaded one. For the simulation I made the loaded fridge have double the heat capacity.

Assuming the refrigerator only cycles on when the temp reaches the top of the graph then there is no difference between the two. Although twice as much heat energy must be put into the loaded refrigerator, the simulation shows that it takes exactly twice as long. That is, the average rate of heat flow is identical.

So, the answer to the question depends on how the refrigerator works.

The heat loss (power) at a particular temperature is the same. So, No - the cooling needed to maintain the thing cold stays roughly the same.

However, the empty fridge has lower total heat capacity. So, it will get warm faster in the absence of power. So, it is worthwhile to fill your fridge and freezer with bottle of water a few days before a big storm that might bring down the power.

No. The rate of cooling must simply match the rate of heating, and heating rate depends only on the temperature difference you want to establish and on the thermal conductivity and surface area of the walls.

More stuff in the refrigerator would give it a higher heat capacity, so that it wouldn't warm up so much when the door is opened. However, it will take considerably more energy to cool it initially from room temperature.

Forgetting about the temperature change, you can look at the heat change. With the cold stuff being immovable solids rather than air (which tends to just spill out of an opened refrigerator, even before it heats up), there will be less total heat lost whenever the door is opened. In this sense, the empty refrigerator might take slightly more energy to reestablish equilibrium after the door is opened.

Short answer: because food is more dense than air, and thus can retain "coldness" longer, once it has been cooled down.

All refrigerators leak temperature, mainly through joints. Problem is, in an empty refrigerator, all you have is cold air (which is the main heat transmitter inside a fridge).

Look for heat capacity. Thermodynamics is really an eye opener on physics. Makes you think about many many things about things arounds you.

Get out in a day when temperature below 32 degree. Take your gloves off and get your hands feel cold. Can you handle it? Perhaps for some time, but touch some object made from copper. Can you handle it? Answer is just for a little time. Now tell me why? What is difference? Is copper object really cooler than air? Accordingly second law of Thermodynamics is no. They are both have same temperature. So why you feel it differently? Molecules of air are light and have less density so they do not have enough "power" to slow down molecules of your body quickly. Copper molecules are much heavier so they slow down your flesh molecules much faster, so you lose your temperature faster and as result your brain get an alert signal, blood is about to freeze in your hands. So now we can return to refrigerator example. You have less molecules and they are lighter, so you need less energy to slow them down.

The contents of the fridge make a difference to its externally visible, thermal properties. For instance, one of the contents is styrofoam insulation. If you remove that, the fridge will hardly be efficient, even though the surface area, surface quality or air flow around the fridge are unaffected. It is because of this insulation that the other contents do not make that much difference. But the insulation is not so perfect that they make no difference at all; it's just a question of how much.

The efficiency of the fridge is directly connected to the penetration of heat into the contents. Heat enters the fridge, and the fridge has to pump it out. Pumping heat requires energy. The more of this ingress and egress takes place, the more energy the fridge requires.

Lots of good answers here, and opposing opinions too. Food for thought (no pun intended). Here are some additional factors that have not been mentioned, yet play a role in the debate:

1). The color of foods that are in your refrigerator, affect the amount of energy required to maintain their set temperature. Consider this: Your refrigerator is well-insulated, to slow the rate of heat transfer from the area surrounding the fridge, to the area within the fridge. If you were a reptile, with the ability to see infrared heat energy (very useful for locating warm-bodied prey) you might be able to see a greater amount of red glow outside of the fridge, as opposed to inside it. The point is this; the "red glow" or heat energy, is continually flowing from the higher level source (outside of fridge) to the lower level destination (inside of fridge). Now, if you happen to be an intelligent, infrared seeing reptile, you might also be aware that the infrared energy that flows through the insulation of the fridge, subsequently bathes the food items with a warming glow. However, the prudent reptile is very much aware that "clear" fridge items (such as a bottle of spring water) allow much of the red glow to pass through them, without absorbing a significant percentage. In contrast, dark colored pork chops absorb nearly all of the infrared glow that reaches them; allowing very little of it to pass through. For this reason, dark colored foods absorb heat energy at a faster rate, while stored in your fridge, than do light colored foods (even inside your fridge). 2). Bacterial decomposition... Lets face it. The reason we store our foods in a refrigerator, is to lower their temperature for the purpose of slowing their rate of decomposition. As bacteria break food matter down into waste product, their busy little bodies generate heat energy. Consider a compost heap (composed of biodegradable matter). Bacteria, along with a host of other organisms, essentially "oxidize" the organic matter in their bodies, which, in turn, produces heat that can be easily observed as a warming effect on the entire heap. Although our food products are decomposing more slowly in our refrigerator, they are indeed decomposing, and heat is being generated within. Thus, a refrigerator that is full of food, tends to "self generate" heat at a greater rate than a fridge that has very little food in it; thereby requiring more cooling to compensate for those pesky little bacteria that were not invited to the party. Question: Do dark colored foods tend to undergo temperature cycles of greater variation, while stored in your refrigerator; thus permitting increased bacterial growth within a given period of time, and ultimately "spoiling" sooner than light-colored foods? (If you can correctly answer this, you may well be a reptilian genius!)

Not the answer you're looking for? Browse other questions tagged thermodynamics everyday-life thermal-conductivity or ask your own question.

2
Is it a myth that having bottles with ice in the freezer improves performance?
0
How do you keep a fridge full of food cooler?

6
Does a full freezer freeze items faster than an empty one?
7
What's the best strategy to fully fill the fridge with beer bottles and have them all cooled?
8
Opening the fridge door to cool a room
0
How to model an apartment's airconditioning?
8
Is amount of entropy subjective?
1
Single story, hotter outside, some shade from porch, enough to cool house with/without air flowing?
1
Minimal work required to produce ice at room temperature
1
Does pressure affect heat transfer between two mediums?