Is an orbiting object traveling along a geodesic in general relativity?

I am getting a layman's understanding of General Relativity. I understand that gravity is understood to be an objects propensity to travel along a straight line in curved spacetime. Would an orbiting object be considered to be traveling along a geodesic if it has its own velocity and falls into an orbit, or would geodesic motion only apply to something like free-fall? What is the difference between an orbit of an object with mass and the bending of light? Is it only light that travels along the geodesic?

Would an orbiting object be considered to be traveling along a geodesic if it has its own velocity and falls into an orbit, or would geodesic motion only apply to something like free-fall?

What is the difference between an orbit of an object with mass and the bending of light? Is it only light that travels along the geodesic?

In physics the expression 'free fall' is used in a wider sense than in everyday language.

In everyday language when you say 'free fall' you will generally mean falling straight towards the center of gravity.

In physics conversation a more general meaning is used. When an object has a velocity component perpendicular to the direction of gravity the motion is still put in the general category 'free fall'.

In physics conversation the meaning of 'free fall' extends even to orbiting motion.


The concept of a geodesic does not refer to something that is inherent in the spacetime.

An orbiting satellite is moving along a geodesic. Let this satellite be of a type that it also has some strong onboard propulsion available, so that the satellite can change its own velocity.

After a burst of propulsion the velocity of the satelite has been changed and it is subsequently in an orbit that has a different shape than the previous orbit. Whatever the origin of the velocity: every orbit is a geodesic. The criterium is that the object in motion isn't pulling G's.

In the presence of gravity the path that light follows is far less curved than the path of slower moving entities, because light moves so much faster. Light moves along the geodesic that corresponds to the geodesic for that velocity of propagation.

The answer to your question is yes. Just think about the ISS, and the astronauts. Why do they feel weightless? Contrary to popular belief, it is not because the only force acting on them is gravity. In reality, there are multiple forces acting on them, but they all cancel out to zero.

There is another very nice example of this with the cannonball. 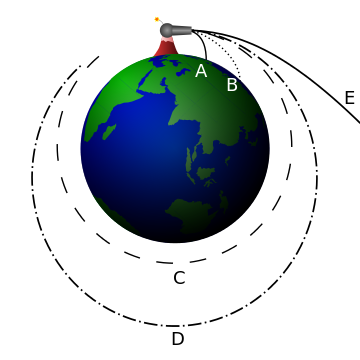 If the speed is the orbital speed at that altitude, it will go on circling around the Earth along a fixed circular orbit, just like the Moon. (C) for example horizontal speed of at approximately 7,300 m/s for Earth.

You see some people say that the astronauts on the ISS are floating because they are in a zero gravity environment, where spacetime is flat. In reality, the gravitational force (acceleration) is 90% at the altitude of the ISS compared to here on the surface of Earth.

What happens to the ISS is that there is another pseudo force (centrifugal force, their velocity) pointing in a direction away from Earth, and that cancels out gravity to a net zero. So the astronauts truly feel weightless, because the net force acting on them cancels out to zero. They are in free fall.

The centrifugal force counteracts the earth's gravitational force of attraction.

But are they moving along a geodesic? The answer is a sound yes according to GR.

a freely moving or falling particle always moves along a geodesic.

Not the answer you're looking for? Browse other questions tagged general-relativity orbital-motion projectile geodesics free-fall or ask your own question.

2
Why do objects "fall" along spacetime geodesic lines?
4
Why does gravity cause time dilation?
0
Is spacetime in an ellipse around a massive object, or does it just slope down towards the massive object?
3
Is a brachistochrone a straight line in curved space?
0
Light Clock and Length Contraction in General Relativity
44
Why does the speed of an object affect its path if gravity is warped spacetime?
7
Do gravitational waves travel always in a straight line (along a geodesic) like EM waves?
1
Is this general relativity diagram correct?