How can zero-point energy have any measurable effect when it is just a constant offset to the Hamiltonian?

In classical (say Hamiltonian) mechanics, adding a constant energy offset has no effect on the dynamics of the physical system. One way to understand this might be to understand that Hamilton's equations of motion which determine the time evolution of the system variables depend only on derivatives of the Hamiltonian, and the derivative of a constant is zero.

In the Heisenberg picture we get the Heisenberg equations of motion in place of the Hamilton's equations (they are the exact same save for hats on the variables). By the same argument a constant offset to the energy has no effect on the dynamics.

In the Schrodinger picture we know that an energy offset simply adds a global time-evolving phase to every state. This global phase has no observable effects.

How then can any argument be made that zero point energy has an physical consequences?

I would say that the following Hamiltonians result in the exact same physics:

I think what is typically meant by "zero-point energy" in this context is actually zero-point kinetic energy. Exactly as you say, a constant offset $E_0$ in the Hamiltonian $H = H_0 + E_0 1\!\!1 $ has no consequences on the dynamics, and classically speaking, it corresponds to picking a different reference point for your potential energy function.

The kinetic energy on the other hand can have a non-zero expectation value in the ground state of the system, which is not arbitrary at all. For example, in the case of the Harmonic oscillator, this is $$\frac{1}{2} m \omega_0^2\langle x^2 \rangle =\frac{\hbar\omega_0}{4},$$ which is not at all just a matter of picking potential energy reference. It means that the oscillator is physically moving even at zero temperature due to quantum fluctuations.

For example, suppose you trap bosonic atoms in a harmonic potential and cool them. At a low enough temperature, most of them will condense into the ground state, a result known as Bose-Einstein condensation. But when you turn the trap off, the atoms will start to spread out, as shown at right in this famous picture: 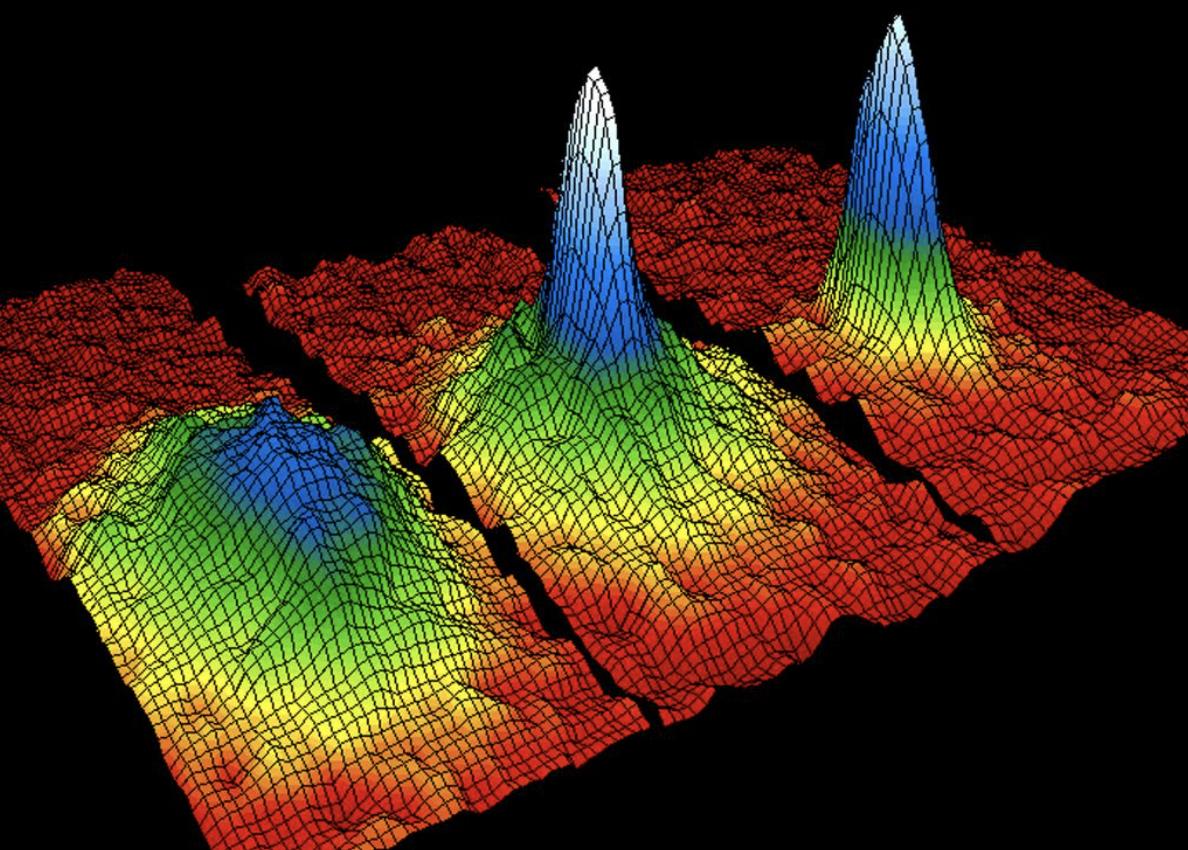 This is because the $\hbar \omega/2$ zero point energy of each atom becomes ordinary kinetic energy.

As another example, consider the Casimir effect, an attractive force between two metal plates. The fact that the total zero point energy of all the modes in the electromagnetic field is infinite is completely irrelevant. The effect comes about because moving the plates changes the frequencies $\omega_i$ of some of the modes, and therefore changes the total zero point energy, which is the sum $\sum_i \hbar \omega_i/2$. Since the energy changes with the positions of the plates, you get a force between them.

A constant zero-point term in total energy expression changes nothing about internal dynamics of the system. It does affect its behaviour in external field though. Adding a positive total energy $\Delta E$ to a system means this system has then greater inertial mass by $\Delta m = \Delta E/c^2$.

So in theory one could test the prediction that there is a zero-point energy term proportional to $\hbar \omega$, by making careful measurements of weight of harmonic oscillators of known same composition, differing in the oscillation frequency.

Similar mass change effect is known to exist due to chemical bonds, and zero-point energy is of similar order of magnitude, so maybe it can be measured as a mass effect too.

For example, by changing isotopes one can change mass of nuclei in a lattice without changing chemical bonds too much, or only in a controlled accountable way. Then natural frequencies of oscillation in the lattice change and associated zero-point energy changes as well. Maybe the associated change in inertial mass or weight can be measured.

The zero point energy should be the source of gravity and of space curvature. This leads to the vacuum catastrophy. Your eq. 3 makes thus problem even worse if that is possible. The zero point energy is also believed to cause the Casimir-Polder effect. https://en.m.wikipedia.org/wiki/Cosmological_constant_problem#:~:text=In%20cosmology%2C%20the%20cosmological%20constant,suggested%20by%20quantum%20field%20theory.

You are correct that a constant energy shift does not affect the dynamics of the quantum harmonic oscillator. However, relative energies do matter. It is conventional (at least in non-relativistic quantum theory) to define the energy of the free zero-momentum eigenstate as zero, and define other energies relative to that energy.

Suppose we start with a free particle (in other words, $H=P^2/(2m)$). Then the eigenstate of $P$ with eigenvalue zero also has zero energy. (Technically, this state is not normalizable and not a proper member of the Hilbert space, but we can still get proper states with arbitrarily small energy.) Now, suppose we turn on a potential so that $H$ is now the harmonic oscillator Hamiltonian. The zero point energy will have to be greater than the energy of the free particle. Now if we added a constant shift to $H$, then we could make the zero point energy equal to $0$. However, then the energy of an unmoving free particle would be negative.

Not the answer you're looking for? Browse other questions tagged quantum-mechanics energy harmonic-oscillator hamiltonian vacuum or ask your own question.

12
Consistent, complete, and generalized description of the quantum harmonic oscillator
4
Is the zero point energy of this system zero?