Does hero's engine have an upper limit for the rotational speed under ideal conditions? 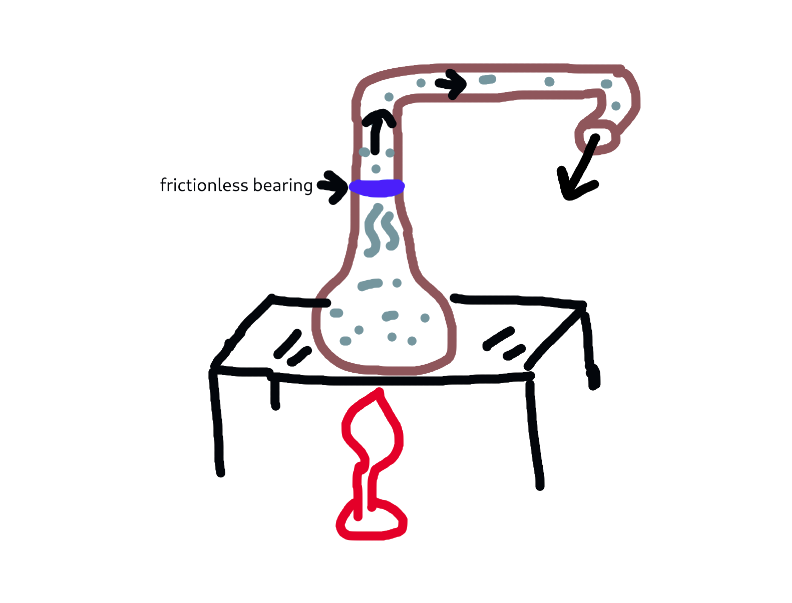 This is a simple hero's engine. The source of the gas and the rotating part is seperated by a frictionless bearing. So only the upper part rotates. My question is this:

Given ideal conditions ( no friction / air drag, unlimited gas ) is there an upper bound for the rotational speed of the upper part (in newtonian mechanics)?

I have done some calculations and it seems there indeed is an upper bound. Assuming the gas is released at a constant speed $v$ wrt the edge of the pipe the released gas produces a torque $\frac{\Delta m v r} {\Delta t} $ where $∆m$ is the mass of the released gas in small time $\Delta t$ and $r$ is the radius of the upper part. If the edge of the upper part was rotating at speed $V$ at that time wrt ground then to make the gas left inside the pipe travel to the edge (filing the void left by the released gas) $∆m V r$ amount of angular momentum is needed. Angular momentum is conserved here.

Are my calculations right ?

Browse other questions tagged newtonian-mechanics thermodynamics conservation-laws ideal-gas or ask your own question.

0
Mechanics question don't understand answer
1
Deriving the adiabatic relation for an ideal gas from a differential geometry point of view
0
Relationship between energy and temperature in ideal gas
0
Why is pressure change in the alternative pathway not coming out to be same as in the original pathway even though pressure is a state function?
0
Am I getting the definitions of these thermodynamics quantities right?
1
Angular momentum w/ changing moment of inertia
0
Why there is no upper limit for speed in Maxwell's speed distribution curve?
3
Why do we only use energy in the micro canonical ensemble?