Why does neutral/EM meson decay scale as the cube of mass?

For beta decay of mesons, the heavy quark approximation and surely other techniques can be used to show that the decay width scales as the quintic power of mass. This can be checked from pdg files very easily with this gnuplot script:

Units in the table are GeV (mass in the horizontal, decay width in the vertical). And you can appreciate the aforementioned quintic scaling as the blue line here. 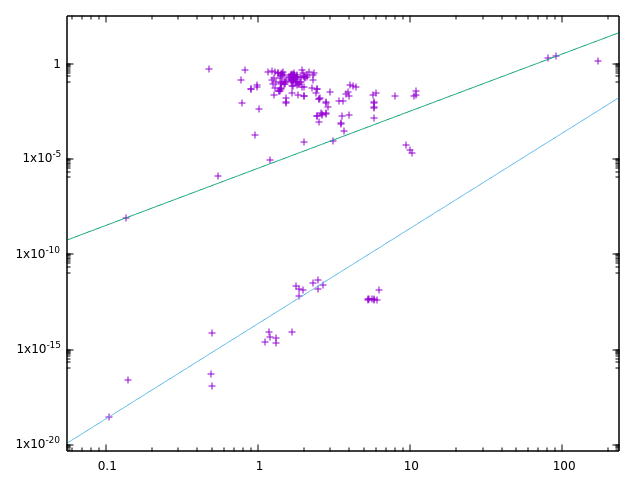 But surprise, there is also an alignment for neutral, purely electromagnetic, decays. It is a cubic scaling. Is it an artifact, or can it be shown analytically?

The particles above the green line are all the mesons and baryons that have strong decay. For some of these, when the partial EM decay width is known, usually to $\gamma\gamma$, it also aligns on the green line. I have checked this for $\omega, \phi$ and $\eta'$.

It would seem that the hadronic scale, extracted via the "reduced width" $\Gamma/M^3$, has some general bound, the only exception being the three first states in the bottom quark sector: $\Upsilon(1S,2S,3S)$ happen to have some extra of stability allowing them to lie under the cubic line. But note $\Upsilon(4S)$ is already above it.

You might get better answers if you actually identified the particles involved and their decays.

I'll just remind you of the dimensional analysis aspect of all of them, which you drill in an introductory HEP course:

For weak decays involving one dominant scale, Γ with units of energy must go as the amplitude-squared, involving an exchange of a virtual W in the amplitude, so $1/M_W^2$, so $$ \Gamma\propto \frac {1}{M_W^4} ; $$
for dimensional consistency, for a single scale problem, the mass of the decaying particle, must involve the 5th power of its mass, as you first learned in muon decay, $$ \Gamma \sim m^5/M_W^4. $$ This might hold for mesons, dominated by heavy quarks, etc...

By contrast, for e.g. em decays of the pion, $$ \Gamma_{\pi^0} \sim \alpha^2 \frac{m_\pi^3}{f_\pi^2}, $$ by dint of the PCAC nature of the pion, which resolves to a triangle of quarks inversely as $f_\pi$ in the amplitude. This might be at the root of your observation, but I can't tell which meson decays you are talking about.

Not the answer you're looking for? Browse other questions tagged particle-physics standard-model mesons or ask your own question.

1
Are there notable cases of anomalies in the mass-decay rate relationship?
3
Top quark and $Z,W$ bosons?
4
should the Z0 decay at the same rate that the neutral pion?
5
Width of the decay of Higgs boson into dimuon
7
Why does charmonium (and phi mesons) not decay via quark and antiquark annihilation?
0
Why the mesons $\pi^0$ and $\eta$ are "degenerate"
2
Why is the pattern of full decay widths of $\Upsilon(1S)–(2S)–(3S)$ mesons inverted?
2
Gell-Mann–Oakes–Renner relation for heavier pseudoscalar mesons?