Why is the center of a torch beam visible even through an opaque body like my finger? 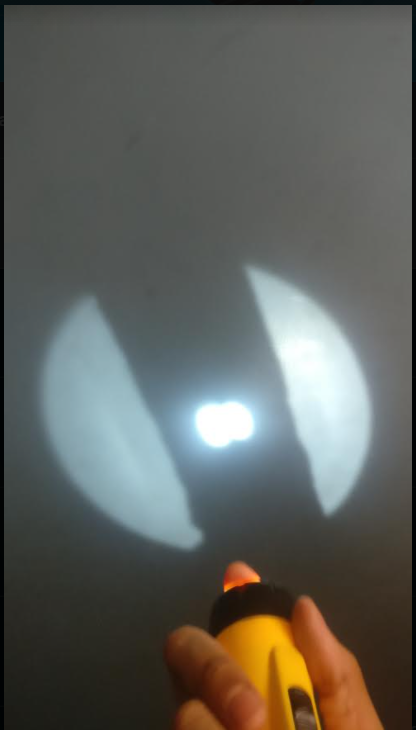 I have noticed that my finger never seems to completely block out the light of a torch beam as the center (brightest part of the torch) would be visible through the shadow of my finger. I thought it was because of the lens that is usually in front of the bulb, but the same thing happened even after I removed the lens. Can someone please explain why this happens?

Sorry all but Dale's and M. Enns' answers are wrong. Ben51's answer is half-right.

The translucency of your finger is not what is causing this phenomenon. If you want you can test this with other objects of approximately finger-like dimensions and you will get similar results.

The light has a bulb at the focus of a parabolic mirror, or something approximating a parabolic mirror. It casts light in all directions. Some of it comes out of the front aperture, creating a dim, wide beam. Most of it, however, bounces off of the mirror.

A parabolic section (like the flashlight mirror) has two focuses: one inside the parabola, where the bulb is, and one at infinity - straight ahead.

Aside - this is why thermal solar collectors use parabolic mirrors. The sun is far enough away to work like the focus at infinity, and the pipe containing the water is at the other focus, like a flashlight in reverse.

Because the bulb is not a perfect point source, and the mirror is not a perfect parabola, it's just a narrow beam that widens slowly, not a truly straight never-widening beam. (Over very long distances, we'd also have to contend with the fact that air is not a perfect vacuum, and introduces some diffusion of its own, but that contribution is miniscule over the relevant distance.)

This should give us two small bright spots shaped like half circles at the middle of the shadow. 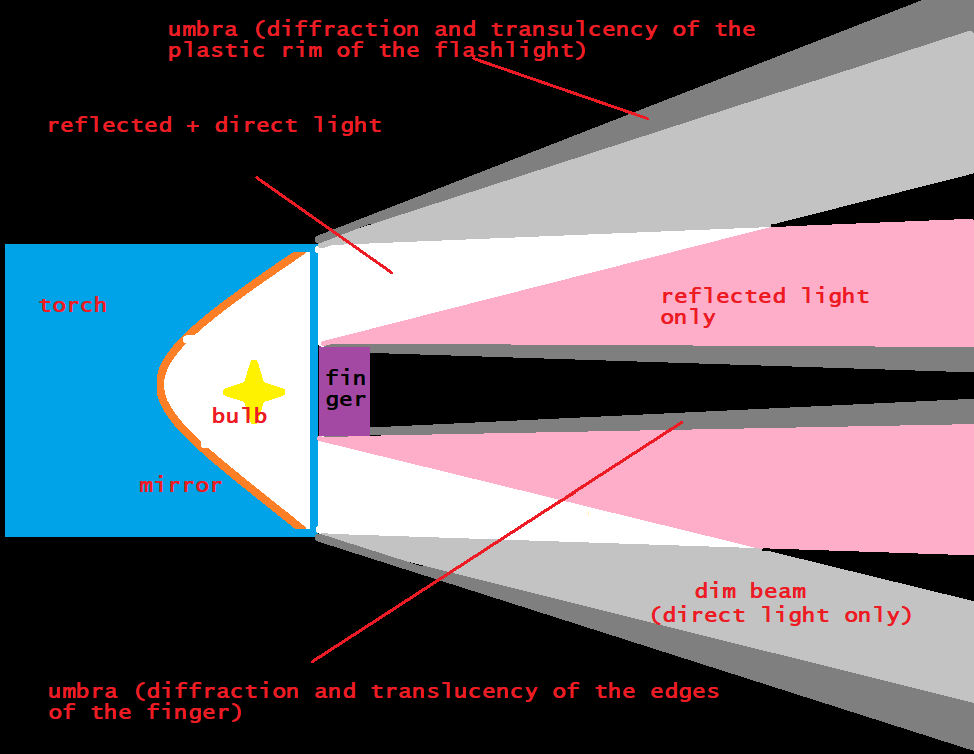 Now, you don't see two half circles and neither does your camera. This is because of two factors: umbra and instrument error.

Umbra: that place where a shadow brightens at the edge of a pool of light. A little bit of this is because your finger has some translucency, but it is a small contribution. If you used the handle of a table knife you would get similar results. More important is edge diffraction from your finger. Between edge diffraction and translucency, you get an umbra: the bright spot has fuzzy edges.

EDIT - I overlooked the importance of the direct light from the bulb to the formation of the umbra, especially around the edge of the dim, wide beam. Since the bulb is not a point source, it will also contribute to the formation of the umbra caused by simple line of sight: a point that can see half of the bulb is illuminated half as much. My guess is that since your finger occludes the whole bulb and the parabolic mirror should approximate a point source at infinity, the effect of an area light source on the umbra around your finger's shadow is small.

Instrument error: neither your eye nor your camera are very good at resolving high contrast light differences, and both of them bias the same way: by oversampling adjacent areas to make them blob together. If you take your fingers and pinch that bright spot on your wall, you'll notice the shadows of your finger tips seem to blob together just before your fingers touch - it's the same instrument error at work, shared by your camera and the MK1 Eyeball.

EDIT 3 - I have fixed my diagram to include the shadow of the finger occluding the direct light from the bulb.

Your finger is not as opaque as you think it is. This is shown by a heart rate / blood oxygen sensor that works by shining light through your finger tip. Here's a short video.

The classification of matter as "opaque" or "transparent" is a little overly simplistic. Matter can interact with light through absorption, scattering, refraction, reflection, transmission, and others that I am sure that I missed.

In the case of visible light interaction with human soft tissue (especially in the red wavelengths) a major interaction is scattering rather than absorption. What you see is light that has been scattered one or more times, but not absorbed. This explains both the fact of the light transmission and also the "fuzzy" appearance. Because the light is scattered it does not go in a straight line from the torch to your eye.

The lens just makes more light reach your hand, it does not change the interaction (scattering) with your hand.

I assume you are asking why the edges of a shadow are blurred, in this case so much so that the blur extends all the way to the middle of the shadow.

The main reason is probably that the light source is a disk rather than a point. There is likely a reflector behind the light source; even if there isn’t, there is something there that scatters some of the light that is initially going sideways in a forward direction. So while your finger blocks some of the light going to a particular point on the wall, it doesn’t block it all. If instead of a finger you put something larger in the beam and positioned it further from the source so that it still cast a shadow with visible edges, the blur would not reach all the way to the middle.

Even with a point light source shadow edges still blur due to diffraction. But I think that is a minor factor in this case.

For Ruslan - here is a diagram showing the difference between what is going on with a telescope and a flashlight - here depicted as a telescope that someone has turned into a very inefficient flashlight by putting a light at the focus. 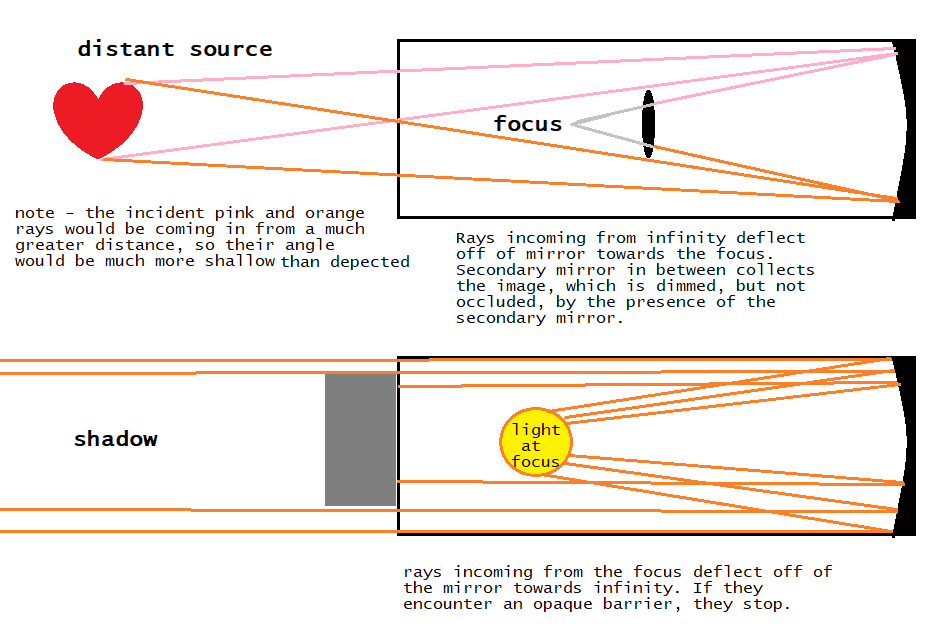 Nice photo and interesting problem! Without giving direct answer I think you should take the excellent opportunity you have to do more complete experiment and for example vary the distance of your finger from the light as someone mentioned in theory and also try covering half of the light with a coloured filter. Also vary distance to screen and try different objects which are totally non transparent all an object which is very transparent like a glass cylinder and observe and think and analyze generally. If you read ideas raised in other answers posted you shouldn’t copy but simply write what you think in your own words! This is good for your own learning and also so that powerful search software doesn’t catch you.

Notice there seem to be two focused spots near the centre which must come from reflection from the torch back mirror which is wider than the finger.. from around each side of finger producing the two slightly off center images ... if you vary the distance to screen these spots could wander toward and away from centre being coincident at some distance. Putting a color filter over one side should consequently make just one of the spots so colored... which could even be over the other side compared to the larger direct light disc which must clearly be colored “same side”. Note that without the front lens the spots should focus much less and be large if they appear at all? Is this observed? Interesting how the manufacturers of modern torch cleverly tried to get the maximum light thrown forward by judicious choice of back reflector plus forward lens.

Not the answer you're looking for? Browse other questions tagged optics everyday-life reflection shadow or ask your own question.

10
The physics behind Google Glass' "prism"
23
How would an X-ray scanner identify a mirror?
3
How to construct matrix to apply U(2) beam splitter to a N dimentional Beam
0
fiber optic face plate physics-opaque to transparent behavior based on distance of object?
17
Does soap repel water?
0
Refraction or reflection in dermoscopy?
0
Question about the colour of an image formed by a concave lens
0
Why do sun glasses shield more sunlight from a specific angle?