Depending on its strength, the attractive double dirac delta potential shown below 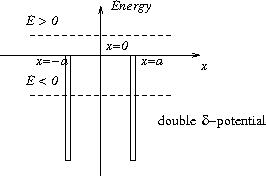 can support two bound states. They are called the bonding and the antibonding orbitals as shown in the figure below 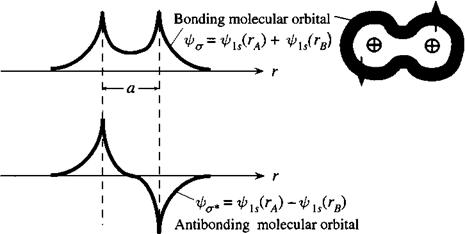 A single electron does not experience Coulomb repulsion with itself. The potential and wavefunctions you describe involve only one-electron, so the state energy cannot be associated (even as an approximation) with the Coulomb repulsion between two electrons.

On the other hand, the double delta potential can be seen as a very crude approximation of the Coulomb potential of two positive nuclei. The fact that for the bonding state, the electronic charge density piles up more in between merely reflects that the electron is more likely to be found between the two nuclei, justifying the name "bondig". The opposite holds for the anti-bonding state.

For the sake of argument, let us add another electron to your model and ask what is the ground state of the two-electron systems? Without explicitly stating other assumptions, you model again does not imply any interaction between the electrons beyond Pauli exclusion principle. If these electrons were of opposite spins, they would both occupy the lower-energy bonding state. If they were of the same spin, one would be in the bonding state and the other in the anti-bonding one.

The $\delta$ potentials may be the main reason why this is a problem. In reality, the nuclei have $1/r$ potentials. The potential for a single electron is lower between the nuclei than on either side.

When the electron wave function has a node between the nuclei, the negative charge density is low. The positive nuclei also feel each other's $1/r$ potential and will then repel each other.

The equipotential surface can then be dissociative.

As @Quantum-Collapse has noted in their answer, there is some confusion here between bonding and anti-bonding states which refer to the one electron problem, and the singlet and triplet states for two electrons. The former problem arises, e.g., when discussing the covalent bonds, in which case the bonding/symmetric state has lower energy, whereas the latter arises, e.g., when discussing the Helium atom where the synglet state, whose orbital wave function is symmetric in respect to exchanging the electrions, is the ground state. Note that the symmetries are different here. The two problems get mixed when discussing the covalent bond in the hydrogen molecule.

To get closer to the question: the node theorem (see, e.g., here and here, but also in many textbooks) states that the ground state of a one-dimensional Schrödinger equation does not have nodes, whereas the n-th state has $n-1$ nodes. (Note that this is strictly true only in one dimension). The physical explanation is that nodes correspond to zeros of the probability density, i.e., the electron is confined to smaller regions in space, which means lower uncertainty in position and higehr uncertainty in momentum, hence the higher energy. This is admittedly a very hand-waving explanation, but the mathematical result is rigorous.

There is a confusion between single electron and multi-electron states here.

First consider the single electron states. The bonding orbital has the lowest energy because it allows the electron to have the lowest potential energy. This is true as long as the bound orbital of V1, $\psi_1$, overlaps with V2 and vice versa. For the bonding orbital $$\Psi_B=\frac{\psi_1+\psi_2}{\sqrt{2+2S}}$$ the two orbitals constructively interfere at the potential positions, which gives it the lowest potential energy. For the antibonding orbital $$\Psi_A = \frac{\psi_1-\psi_2}{\sqrt{2-2S}}$$ the two orbitals interfere destructively. Here $S=\langle \psi_1 | \psi_2 \rangle$. The electron self interacts but this energy is independent of the orbital in the nonrelativistic limit and is considered absorbed in its rest energy.

Not the answer you're looking for? Browse other questions tagged quantum-mechanics wavefunction atomic-physics orbitals molecules or ask your own question.

2
Orbital plot to explain bonding and anti-bonding molecular orbitals
2
Molecular orbital theory
22
Why does the conjugated $\pi$ bond not violate the Pauli Exclusion Principle?
7
How does covalent bonding actually work?
2
Do electrons in the same orbital but different spin feel each other's Coulomb repulsion?
2
Quantitative contribution of kinetic and potential energies to the binding energy of the $\sigma$ orbital in $\text{H}_2$ or $\text{H}_2^+$
1
Why can only orbitals of similar energy interact significantly?
2
What determines a bonding/antibonding molecular orbital?
1
Why Does Molecular Potential Energy Curve Have That Specific Shape?