What do $q$ and $\alpha\left(x\right)$ mean? In our scriptum, we had the following paragraph: 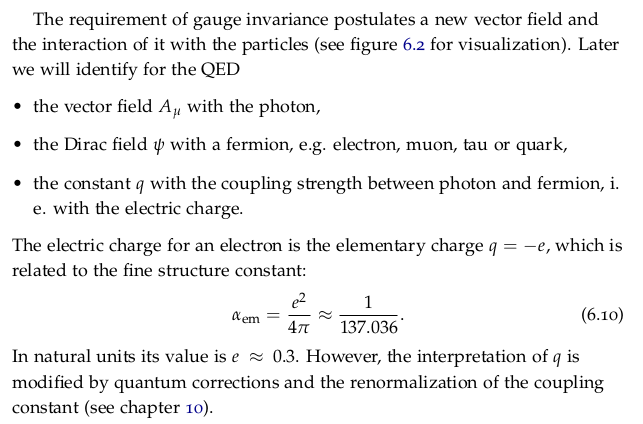 So is it correct to state that $\alpha(x)$ is the (running) coupling constant of QED, while $q$ is the electric charge? I don't read this out to 100%, to be honest.

I also took a look at chapter 10 of our scriptum, but it doesn't specify there what $q$ means..

A generic element $U$ of a gauge group $G$ can be written in term of the exponential of the generators $T_a$ of the group:

So $\alpha(x)$ is not the fine structure constant, it is just an arbitrary real function of $x$. The generator $Q$ is interpreted as the (total) electric charge.

Gauge invariance then becomes equivalent to the conservation of charge. In fact, if $E(\phi(x)_i)$ is some expression containing product of fields, each of those fields, under a $U(1)$ transformation, will transform as

For the expression to be invariant, we have then to require that

which is the statement of conservation of charge.

About the last statement of the page: it turns out that when you evaluate loop diagrams (representing some scattering or annihilation process), the integrals representing them are infinite. You could circumnavigate this problem by absorbing the infinities into counterterms added to the Lagrangian. This has the effect of modifying the couplings. In particular, the value of the electric charge gets some modifications. This is a pure quantum effect, it does not appear in tree level processes (which can be interpreted classically).