Do objects in a 2D universe have an edge?

When discussing a 2D universe, many assume that an object would only be seen as "a line". This would imply that you are seeing the "edge" of the object. But, if there are only two dimensions, height and width, then there would be no edge, since there is no depth. So there would be nothing to be seen.

In a similar manner, it would seem that objects could not "bump" into each other, since they have no edge.

Could objects be "seen" in a 2D world?

EDIT: By "edge" I mean in the colloquial sense, such as the "edge on" view or flat side of a piece of paper.

Using the conventional idea of a drawing of a piece of paper being representative of 2D, we have to add the caveat that both the paper and the medium in which the drawing is done will have depth. But in a 2D world an object would, of course, have only two dimensions. Assuming we use the terms height and width for these two dimensions, as we use when describing a drawing, that would mean there is no depth. In which case an object could not be seen as a line or line segment. Perhaps it could be sensed in another way, such as magnetically, but this would seem to bring up other questions about laws of physics in a 2D universe.

My question is whether we would actually be able to see a 2D object as a line or line segment, which is the usual interpretation, when it has no depth.

Yes a 2d object has an edge. You can draw a square in 2d and it will have 4 edges. A circle in 2d has one edge.

To imagine a 2D world as a 3D person, you can imagine you are floating in a maze with walls that infinitely go up and infinitely go down.

You are also an extended being that goes infinitely up and down, but can move around in the other two dimensions. This situation of symmetry along the $z$ axis in the 3D world is equivalent to the 2D world.

Can you see things in this world? It's a toy model of a world, but clearly at least in theory you can, just like in a maze you can see the walls.

You are using anthropomorphisms ("seeing") to describe what answers you expect from a 2D world. However this assumes that it is possible that something like an eye (or a human being, or a brain) can even exist in a 2D world. This is highly questionable, because for example in 3D electric charges have an electric potential that is inversely proportional to the radial distance to the charge. In 2D Gauss' law dictates that the electric potential is basically proportional to the logarithm of the radial distance (see e.g. Electric field and electric potential of a point charge in 2D and 1D), which is a completely different thing. Given that the possibility of life is depending on atoms and molecules, or more generally very complex and delicate balances in various nonlinear interactions, I doubt that you can even begin to prove that life is possible in 2D and hence, that the term "seeing" can be given any meaning in 2D.

But, if you just mean egde in the sense of the mathematical boundary of a 2D solid volume when projected to a 1D plane/line (which would be the mathematical correlate of a photographic plate in 2D, for example), then of course such a boundary exists (see the drawing below). A compact solid would be projected to a compact (finite) line, and the (disconnected) boundary of a line consists of two points.

Actually, in geometrical optics, people often use ray tracing diagrams (like this) in order to visualize the lens images of objects in 2D (because it is easier to draw in 2D and lens systems are often axisymmetric). In these diagrams, objects are drawn as arrows which represent one of the two points the boundary of a line consists of. 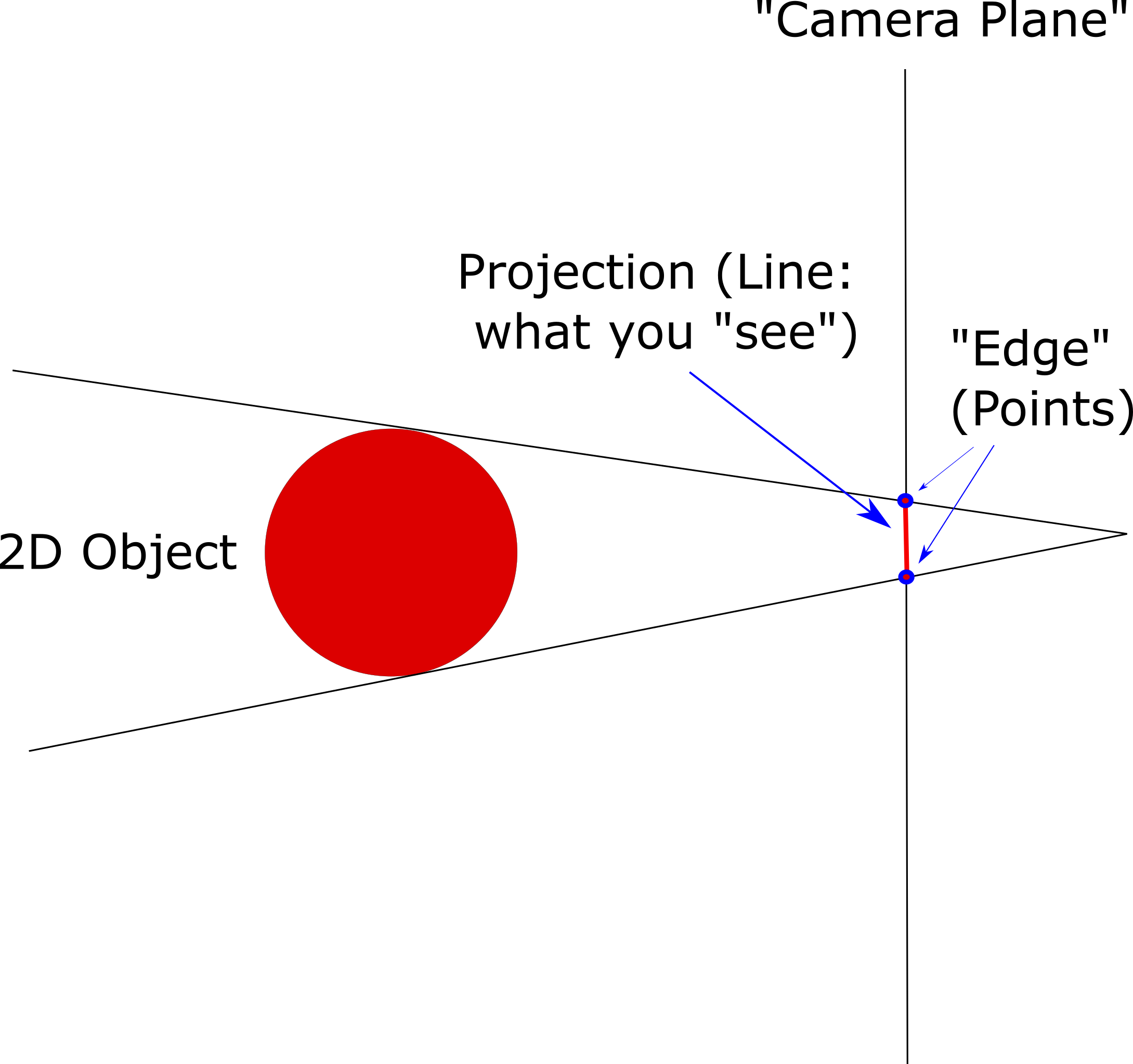 In our 3D plus time Universe we cannot actually see a dimensionless point, a 1D line, or a 2D plane in a 2D Universe. To us these are geometric concepts. We can draw representations of them on a sheet of paper, for instance, but these are only representations to help our conceptualization of them. In a true 2D universe a circle would appear as a line segment of the same length from any angle, and a square would be a line segment with a varying length from different angles because only the edges could be perceived as there would be no third dimension from which to look up or down at them.

Not the answer you're looking for? Browse other questions tagged spacetime topology geometry spacetime-dimensions or ask your own question.