How to determine the minimum "Arrival Distance" given a maximum velocity, acceleration and jerk along with an initial velocity and acceleration?

How might one determine the shortest possible "stopping distance", i.e. the distance traveled at the end of which both velocity and acceleration simultaneously arrive at 0?

Edit: David kindly pointed out that "stopping distance" isn't the correct term here. Perhaps "arrival distance" is better suited? This is because I'm looking for a solution where not only velocity reaches 0, but both velocity and acceleration reach 0.

So far, I've been using the following equation to solve this within my application:

The paper On-Line Planning of Time-Optimal, Jerk-Limited Trajectories by Haschke et al. hints at the complexity of this problem in the introduction:

While Kröger et al. [7] developed an online capable method to compute time- optimal trapezoidal velocity profiles from arbitrary initial conditions, Herrera and Sidobre [6] presented an approach to compute jerk-limited trajectories, but only zero initial acceleration conditions could be handled. To the best of our knowledge, a universal solution to compute time-optimal third-order trajectories with arbitrary initial conditions were not available till now, because the lack of symmetric zero boundary conditions enormously complicates the problem.

I plan to keep reading through this and report back with any useful findings.

I'll continue to update this section with edits showing my work in progress when I resume work tomorrow if no one beats me to it in the meantime.

I'm attempting to improve a motion profile for some linear actuators that are present in an art installation that I'm working on in a small team.

Any assistance/guidance is greatly appreciated!

Shall indicate the method to start with.

From Maclaurin Series we have the expansion of displacement in terms of its successive derivatives with initial values:

Usual notation ( u,v) initial and final velocities ; (a,j) are acceleration and jerk. Time calculation is based on average assumption of start, end values of velocity as average: 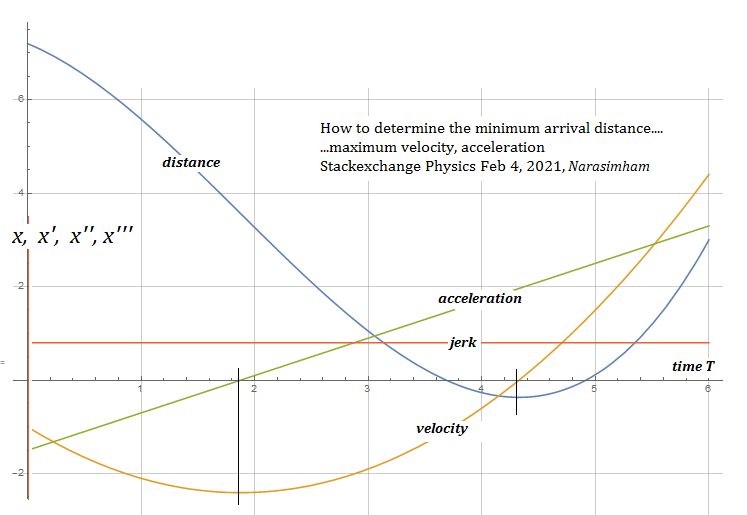 In the above numerical example arbitrary stop (jerk, acceleration, velocity, distance) values are assumed and corresponding start values are calculated:

seconds. Maximum velocity can be evaluated. Net step is to plug it into the expression to cast v_max at start at any other desired instant of time.

Shall complete with the full answer soon.

1
Maximum velocity allowed for motion profile with constant jerk
0
Help finding Delta T for a known position displacement with known accel/decel, etc
14
What is the best path for a given initial and final state?
0
Simple Harmonic Motion given velocity and acceleration
5
What are the scalar equations for velocity and displacement if acceleration obeys the inverse-square law?
0
How can you find average velocity from acceleration and time?