Force exerted by light on a differential surface

Note: This is not a homework question I simply would like to understand how force is exerted on a differential surface and the question rose up in my mind while solving this problem.

Suppose a reflecting sphere of radius R is given and light is falling on it as the figure shown below find the force exerted by light falling with intensity I. The solution to this problem is given as follows

Let O be centre of sphere and OZ be line opposite to incident beam . Consider a radius OP of sphere making an angle θ with Oz to get aciroll on sphere. Charge θ to θ+dθ and rotate radius about OZ vector to get another circle on sphere . The part of sphere between these circles is a ring of area $2πr^2sinθdθ$ Consider a small part △A of this right at P . Energy of light falling on this part in time △t is $△u=I△t(△Acosθ)$. 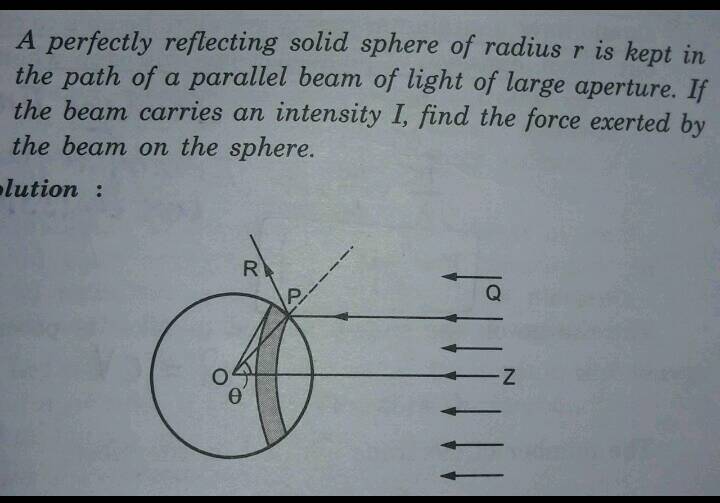 I understand that the cos$\theta$ next to the A is because intensity is force acting perpendicular to the surface but if we take the surface as $dA$ rather than $\Delta$A then the force can only act in a single direction because the surface is that small and hence the it becomes $du=IdtdA$. Using this I get a different result, at first I thought that the cos$\theta$ is there because the net force acts on that direction in the sphere but that doesnt seem to be the case as the solution follows by saying that the net force is along ZO and adds another $cos\theta$ term. Could someone clarify where am i going wrong or is this a misunderstanding

24
“Find the net force the southern hemisphere of a uniformly charged sphere exerts on the northern hemisphere”
1
Solving the potential function for a Dielectric Sphere in a constant Electric Field
0
How to calculate the pressure force on Magdeburg hemispheres?
25
Why is the force exerted by a light beam on a spherical object independent of the amount of light reflected or absorbed?