Why can I see my face in a spoon?

If I hold a spoon with the concave side facing me, it approximates a concave mirror.

If my eye is symbolised with an arrow, then we can represent the situation like this: 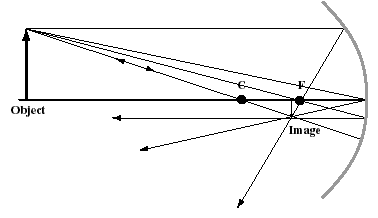 The problem then arises. The image clearly forms below the eye and the rays all spread out below the median line, whereas my poor eye is above the line - so I shouldn't see any image.

I can however see my face when I do this with a spoon (very ridiculous to see grown man doing this). I do admit that there is one ray that I should be able to see: 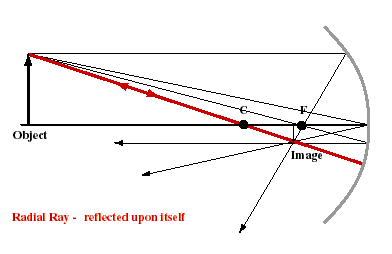 However, is this singular ray able the only reason I can see my face or is there something else I'm missing?

Just to clarify, for you to see anything clearly at all, you do need multiple light rays traveling at multiple angles, hitting your eye lens at different points. Your eye lens focuses all these rays to a point on the retina, where their intensities add together to form a signal your retina registers.

And with the spoon example, this is exactly what happens! Let's review the steps.

To get a good understanding of how you (or a camera) can see something, it is often helpful to include your eye lens (camera lens) and retina (sensor plane) in the ray diagram. I've drawn such a diagram below that illustrates the steps above. 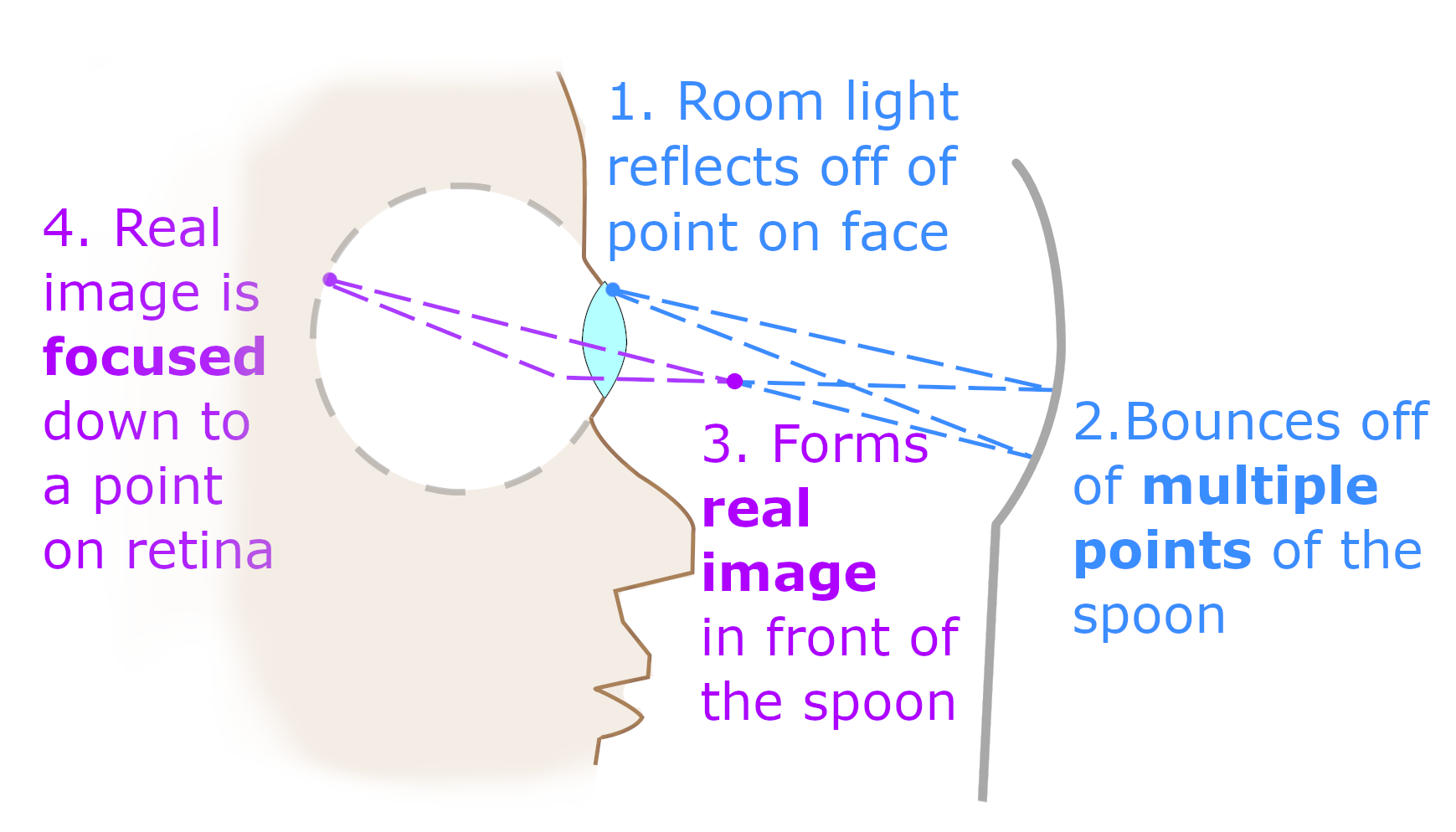 EDIT: Looking at Ryan's answer, I see your main confusion might have just been the arrow directions. But even in your model in which the pupil is a single point, it is good to remember you still should think of each "ray" that passes through the pupil as really a bundle of rays that can diverge or converge as it travels through space. 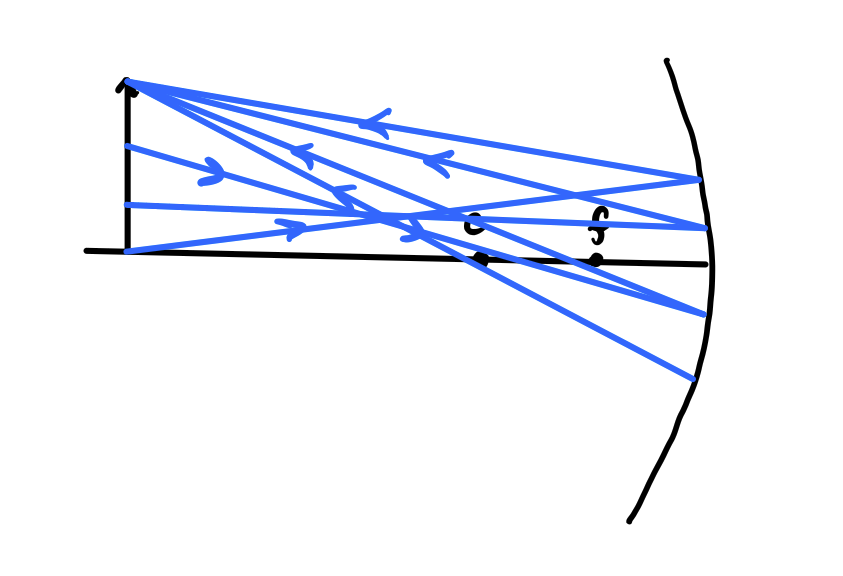 So you see your face, upside-down, and you see it at the location of your eye.

That singular ray is only how your eye sees your pupil. The other parts of the image will come from the other rays. For instance the top ray might be going to your chin, which is why you look upside down. To think of it this way you should really draw the arrows with their heads on the other ends, since they give the paths of rays that you see.

We are taught in school that a curved mirror/lens will form an image at the focal point. However, there are an infinite number of points which are not the focal point which also produce some image. They just don't produce the expected image! So the question is: if you move your detector (eyeball, film, CCD, etc.) around the field near the focal point, can you find a spot where no light rays appear? Can you find a "black hole" where you look at the spoon, but there is no spoon? Of course you cannot.

If we consider a typical bathroom/bedroom mirror, we can ask: where is the focal point? And the answer is: everywhere. That's because it reflects the rays with 0 curvature, so there is no "focusing" effect. No matter where you stand in front of a flat mirror, you will see a "clear" image. Hopefully, this is not surprising or controversial.

Now consider the convex mirrors placed in corners to enable pedestrians or drivers to see around a corner. Again, we can ask: "Where is the focal point?" And again, the answer is: "everywhere in front of the mirror". The main difference between a flat and a convex mirror is that a flat mirror will show you a field which is the same size as your visual field without the mirror present (your viewing frustum is the same size, but oriented backwards in space), but the convex mirror will show you a wider field (the viewing frustum is larger, because the mirror collects rays that you would not otherwise see and sends them to your eyeballs). Now, this is strange! How can we see more than we can see? If a flat mirror lets us see our full field of view, then how can a convex mirror show us more than the full field of view? And it does so by distorting the image. It squeezes the portion you would normally see in order to make room for the additional image. Even so, moving about in front of the mirror will not reveal a "black hole" where no reflected rays are sent. An image is formed at every point in front of the mirror (though it's a different image for every point).

So what do we see if we are not at the focal point? Well, that depends on where we are! If we are "in front of" the focal point (meaning, between the focal point and the mirror), the rays are still converging, and so we will see the same image orientation as a flat mirror, but enlarged, because we are collecting light rays from a broader field. However, this enlarged image will only be a subset of the field that the full spoon can reflect.

On the other hand, if you are "behind" the focal point, then the rays will converge onto the focal point, and then continue on their merry way, diverging from each other. In this region, the concave mirror acts somewhat like a convex mirror, with an additional directional reversal! That's why moving the spoon further away from you allows you to see a broader field of view, just like a convex mirror would. In particular, the rays which converge on the focal point don't stop there just because that's where we normally put a camera sensor. They keep on going, spreading out and forming a shrinking image (because of their divergence) which just keeps getting smaller the further you go from the spoon. But the fact that they all converged on the focal point means they will all cross at that point and invert the image beyond.

I can however see my face when I do this with a spoon (very ridiculous to see grown man doing this). I do admit that there is one ray that I should be able to see:

Your diagram assumes that your eye is a single point. Yes, if we take the perspective that we have a vanishingly tiny, single-point camera, then since that camera can intercept only one ray, that one ray is how it can capture its own reflection. Every other ray emanating from the camera, and bouncing off the mirror misses that vanishingly tiny camera.

If you want to understand why you can see your face, you need a more robust diagram which models points on your entire face, in relation to the concave mirror and the eye, and which also has a model of the eye that is not a single point, but a lens that captures multiple rays from the same point source.

1
Why Image is not enlarged if we keep convex lens first and concave lens at last?
1
Does the position of the final image in a multiple lens system found by the thin lens formula always agree with the ray diagrams?
0
How do lens capture reflections clearly?
2
Can a person with healthy eye see things clearly if he/she uses spectacles?
2
How do we perceive object distance in refraction/reflection?
0
Do all objects we see emit light which then forms an image inside our eye?