Why is nitrogen (with 7 protons and 7 neutrons) so much more abundant than any other odd-odd isotope?

What's up with nitrogen-14? Why is it so much more abundant than any other odd-odd isotope?

and information about the elements’ origins, 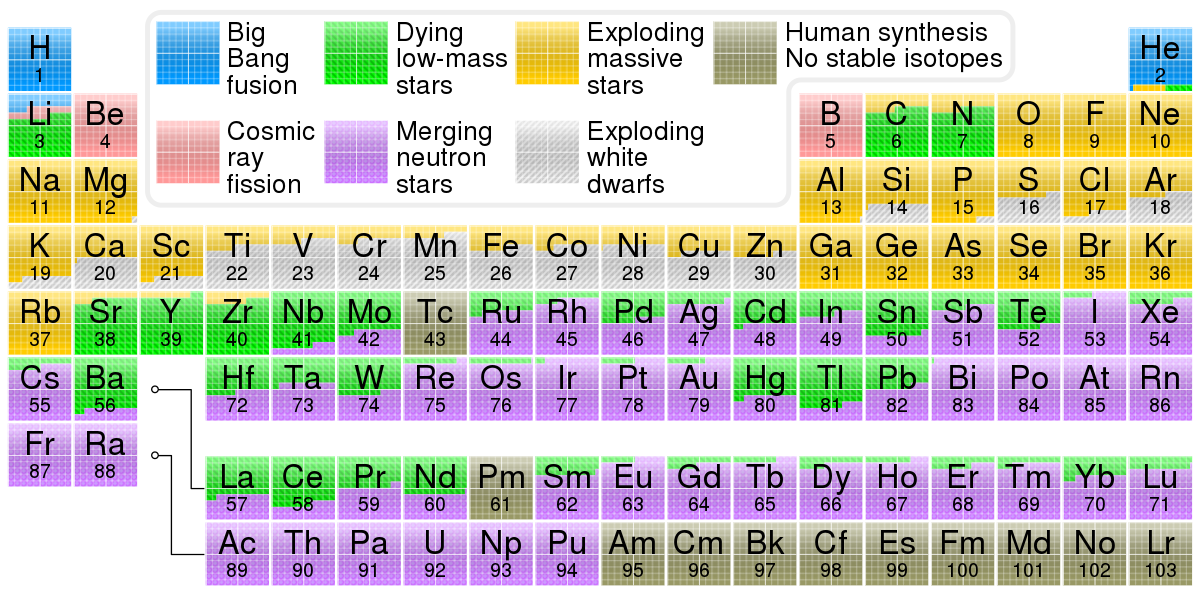 Tantalum is way out in the tail of the other heaviest elements. It’s rare for the same reason that all of the heavies are rare: they have to be produced from iron by the s-process and the r-process.

Deuterium, lithium, and boron are mostly not produced in stellar fusion at all. Deuterium is produced by from protium by neutron capture, but has a binding energy of only 2.2 MeV. An environment with enough neutrons to produce deuterium probably also has lots of thermal photons with enough energy to dissociate the deuterium. And there is not a low-temperature fusion pathway to produce lithium or boron. The earliest “zero-metallicity” stars produced carbon in the triple-alpha process, which enabled CNO-catalyzed fusion at lower temperatures in their higher-metallicity descendants. Some lithium was produced in the big bang, but no boron. The figure suggests that essentially all of the universe’s boron was produced as cosmic-ray spallation fragments.

In this picture, nitrogen outnumbers the other odd-odd isotopes just because it’s easier to make nitrogen in main-sequence low-mass stars than it is the other elements.

Another way to ask why nitrogen is the most abundant of the low-mass odd-odd nuclei is to ask what happens to each species in the kind of high-radiation environment where s-process element production might be taking place:

I don’t know if there’s a good, intuitive explanation for why nitrogen-14 is a hundred times more likely to undergo (n,p) than (n,$\gamma$). I suspect that, if the cross sections for those two processes were reversed, then the s-process would also deplete N-14 relative to N-15. But whether the s-process is actually relevant here, or whether it’s just a useful shorthand for “a place where element production happens and there are lots of neutrons” which happens to support a just-so story, isn’t something I’m terribly clear on.

I think it is down to the production mechanism in the case of 14N vs other N isotopes.

Nitrogen-14 is the dominant catalysed by-product of the CNO hydrogen burning cycle, which powers stars with mass $>1.5 M_{\odot}$. There has been plenty of time in the universe for such stars to have completed their lives and returned their nucleosynthetic products to the interstellar medium. Further, because the birth mass distribution for stars strongly favours lower masses ($ N(M)\propto M^{-2.3}$), as opposed to higher mass stars that might process the nitrogen further, there are lots of "production sites" in a typical galaxy.

The reasons that 14N ends up having the highest equilibrium concentration of the C, N, O isotopes involved in the CNO cycle is discussed in https://physics.stackexchange.com/a/587699/43351 . In summary, the proton capture reaction that converts 14N to 15O is a relatively slow "radiative capture" involving the electromagnetic interaction and emission of a gamma ray. The other proton captures in the CNO cycle go via the strong interaction or are faster because they involve no Coulomb barrier (beta decays). In particular, 15N is very rapidly turned back into 12C by a strong proton capture followed by alpha decay. As a result, when the cycle reaches equilibrium, the 14N proton capture is the slowest reaction and the 14N content of the star builds up.

In intermediate mass stars ($1.5-8 M_\odot$) a significant part of the CNO cycle burning takes place in shells around the core. Towards the ends of the lives of these stars, there are instabilities that cause mixing of the nuclear processed material into the envelope, which can then be ejected into the interstellar medium via strong winds.

As for the other isotopes in your question, Deuterium, 6Li and 10B are very fragile and are easily burned in stellar interiors at temperatures below that required for hydrogen burning. The same is true of 7Li and 11B (the dominant isotopes), but the temperature requirements are higher and there are also production mechanisms for these isotopes inside intermediate mass stars (see the "Cameron-Fowler mechanism") or in classical novae.

Not the answer you're looking for? Browse other questions tagged nuclear-physics isotopes nucleosynthesis or ask your own question.

2
Why is the isotope Nitrogen-14 formed preferentially in CNO-cycle stars? As opposed to N-15?

13
Why some nuclei with “magic” numbers of neutrons have a half-life less than their neighbor isotopes?
57
Why is technetium unstable?
10
What would be the first compound formed in the early universe?
0
How long remains a boron control rod?
3
Has a nuclear “neutron halo” been measured directly? Anything other than “breaks easily”?
4
Why would antiprotons be particularly sensitive to “halo neutrons” as described in this Nature news item?
4
Is there any simple way to predict beta decay half lives?
2
Could a Λ or Σ baryon be stable inside a nucleus?