So I want to calculate the electric field at all different locations for the two conductors in the image below. 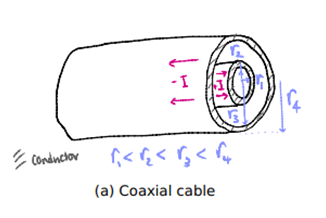 My reasoning is that E will be=0 if $r>r_4$ and if $r<r_1$, while I can find a value for it with Gauss's law for $r_2<r<r_3$. My question is how do I deal with the locations where $r_1<r<r_2$ and $r_3<r<r_4$? Normally I would have just assumed their thickness is negligible and thus say E=0 for $r>r_3$ and $r<r_2$. But then I googled whether the current was present on the surface and apparently, for skin effect, most current in capacitors is near the surface, which would mean that there is some charge in the thickness of the conductors. Would this mean that E=0 for $r<r_1$ and $r>r_4$ and then it has a value from Gauss's law for $r_1<r<r_4$?

It just doesn't sit right with me. In my head the electric field in a conductor is just where the vacuum is, i.e. between the plates, not considering the thickness of these. Am I wrong? Or maybe is it just related to a different charge value because the volume and thus the charge changes?

EDIT: Just for clarity, these are the details of how I would solve it: I consider a Gaussian surface in the form of a cylinder with radius r and length l, coaxial with the cylinders. Inside the inner cylinder ($r<r_1$) and outside the outer cylinder ($r>r_4$) no charge is enclosed and hence the field is 0. In between the two cylinders ($r_2<r<r_3$) the charge enclosed by the Gaussian surface is $\Sigma$, the total flux through the Gaussian cylinder is $ \Phi_E = ∫∫ E . dA = E(2πrl)$. Thus, Gauss’s law leads to $E(2πrl)=Q_{enc}/\epsilon_0$, or

So my question might be reformulated as: is the above true for $r1<r<r4$ or is it true for $r2<r<r3$ and the locations for $r1<r<r2$ and $r3<r<r4$ have totally different electric fields? The only way I see this changing is if the charge was per unit surface, because then a different radius would change that. But the charge is per unit length, so I do not see the problem... Unless when they say by unit length they do not mean along the length of the wire but along the radial direction?

I would say the electrical field inside the conductors is $0$ by definition of a conductor. You'll find detailed explanations in any classical electrodynamics book but the idea is that if there was an electrical field, the charges would rearrange (almost) immediately to cancel it. The electric field is not $0$ on the surface of the conductor, its function is discontinuous at the surface.

Not the answer you're looking for? Browse other questions tagged electric-fields charge gauss-law conductors or ask your own question.