I was reading through my class book about Heisenberg's uncertainty principle and I was hoping you clarify this for me without recurring to advanced mathematics, please do it in a beginner's level. Basically my book states the the uncertainty principle came as a consequence of considering matter like light, that is a wave-particle duality. It states that is impossible to know exactly, with precision, the velocity and position of an electron ( and it gives an example of how you irradiate an atom, and you know more precisely the position of an electron, but with less its velocity). I think this leads to indicate that the uncertainty principle is a limit of measurement by our technology, which from I understand it's not true (right?). However its gives an analogy of fan which is rotating around fast and it says that at some instant and spot you have a certain probability of having a fan ( I think it passes the idea of probability density, because it seems that the fan is more "denser" in some spots). Well my question is, the Uncertainty Principle actually applies on the fan? Could you not know the velocity and position at some instant? ( I think it must be possible to calculate this from classical mechanics) It is just that this thought unsettled me a little bit, and I do understand that I only have a really superficial knowledge of this whole process, so I'd love some simple explanations of this, thank you!

Basically my book states the the uncertainty principle came as a consequence of considering matter like light, that is a wave-particle duality.

It is important for a future physicist to understand what uncertainty means and the consequent to this uncertainty, probability .

Take a dice, with six faces. When you throw it in the air, there is uncertainty what face will come up. But one knows that surely a face will come up, one of six. That defines the probability function of a true dice. It is 1/6 probable for each face from 1 to six, and the sum of probabilities is 1, there will always be a number coming up.

In statistical mechanics of many particles, in classical physics, one can define probability functions for various measurements, and because classical mechanics is deterministic, they can be derived after various assumptions, example the gaussian probability distribution. . 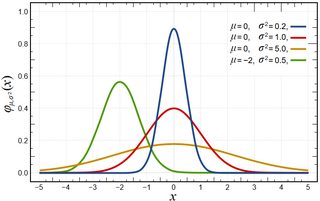 Varius classical probability distributions for finding the value $x$ in a measurement , depending on the particular assumptions. The value $x$ has an uncertainty due to the statistical nature of the problem.

We then come to the Heisenberg uncertainty, in measuring at the quantum level a particle's momentum and position at the same time.

This is not a statement about the inaccuracy of measurement instruments, nor a reflection on the quality of experimental methods; it arises from the wave properties inherent in the quantum mechanical description of nature. Even with perfect instruments and technique, the uncertainty is inherent in the nature of things.

At the quantum level,the function of the probabilities of interaction, and thus measurement, depend on the solution of quantum mechanical differential wave equations, which depend on the boundary conditions of the specific problem, functions $Ψ$. The probability distribution to find a particle at a point (x,y,z,t) is $Ψ^*Ψ$ and that is what has the wave behavior and the wave particle duality.

Maybe this answer of mine about wave particle duality will make this clear for you.