Can someone explain conservation laws in terms of state space?

"Whenever a dynamical law divides the state space into separate cycles, there is a memory of which cycle they started in. Such a memory is called a conservation law."

—What is meant by this statement? Can someone please explain this with an example? This is from Leonard Susskind's "Theoretical Minimum" on classical mechanics.

I asked this before once but no one answered; here is the link to my previous question: What does separate cycles dividing the state-space have to do with Conservation laws? 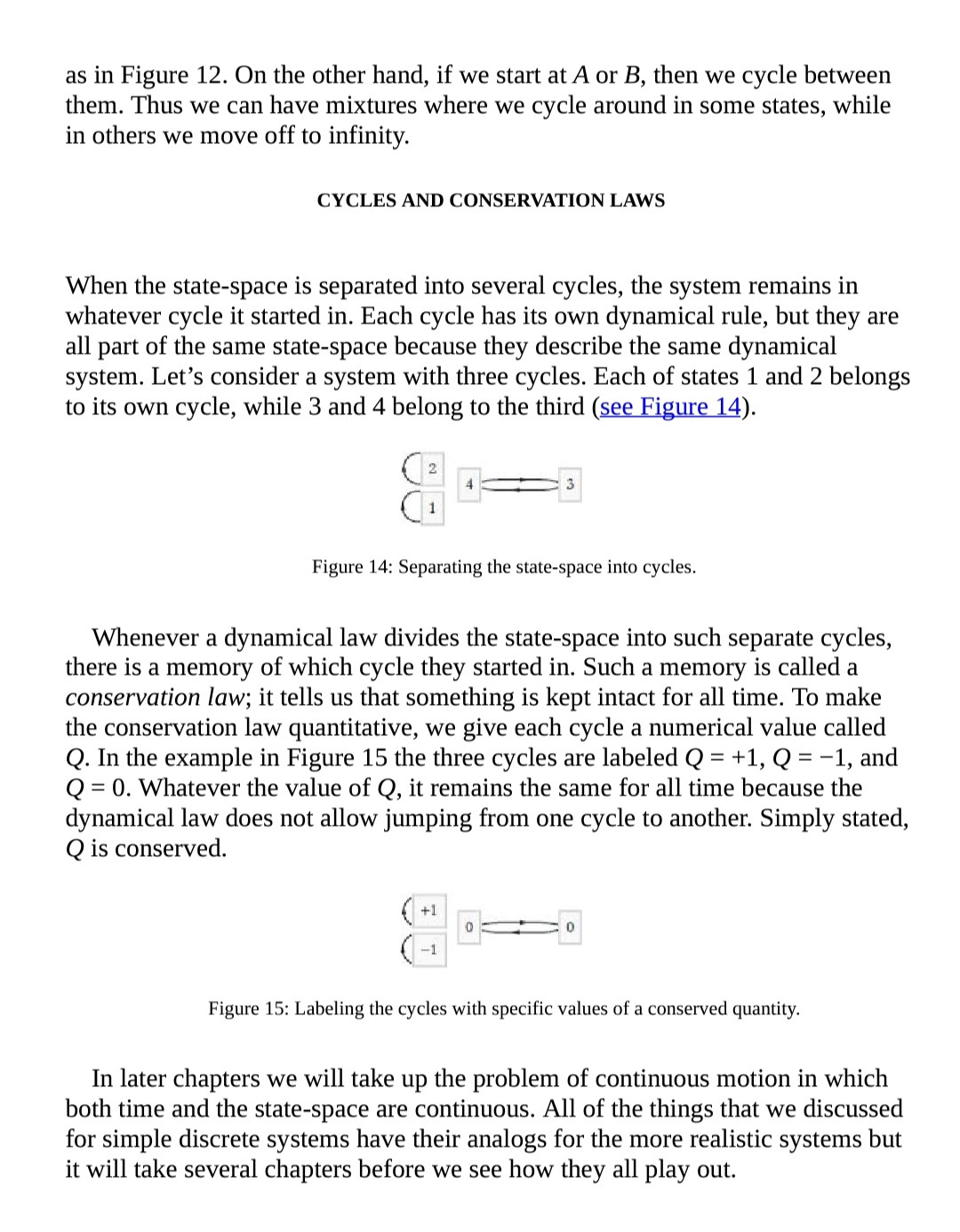 [this answer is very qualitative - in words rather than numbers. However, some simple computation is present in the hope of making the argument more complete without using complex math. It is also pretty long, so feel free to skim through the talking - but I hope the result is explanatory!]

Susskind's example is an extension of the rule of classical mechanics, more in particular of Newton's law $F=ma$ which, given an initial position and velocity, dictate the evolution of the system in a deterministic way.

In classical mechanics, systems evolve over time according to Newton's laws. Take the easiest system you can think of: a bouncing ball. You take a ball, you drop it from some height and observe its trajectory: it will go down, hit the ground (we assume, bouncing perfectly back), it will go up, it will go down, it will go up, it will go down: it is, in a way, in a cycle (up, down, up, down, etc.). The rules of physics and the way you dropped the ball (in this case, Newton's equation) force the ball to stay in this cycle: it can not go below ground, it can not go higher than it started, it can not go left or right if you dropped it perfectly straight. What is fascinating is that, once you know the forces involved, you can describe the whole cycle just by giving it a number: the initial energy.

Why are we in a cycle

Why is this? It is because of conservation of energy. You might know that for a ball of mass $m$ at a height $h$ in a constant gravity field $g$ the energy of the ball is given by $E_0=mgh$. So when you drop the ball, it has a given energy ($E_0$) and that energy can convert into kinetic energy $K={1\over 2}mv^2$ i.e. into velocity ($v$). This happens however at the expense of height: if you accelerate, you go down. If you decelerate, you go up (on the way back). You are forced by conservation of energy of having, at time, $t$, a total energy $$E(t)=mgh(t)+{1\over 2}mv(t)^2=E_0$$ i.e. the total energy has to be $E_0$. This fixes the "limits" of your cicle: you can change $h(t)$ and you can change $v(t)$ but they are forced to satisfy the above equation so they live in a "finite" configuration space: you can not just give $h$ and $v$ any value, you can only choose couples $(h, v)$ which satisfy that equation! [More in general, the equation is $U(x)+{1\over 2}mv^2=E_0$ where $U(x)$ is an energy depending on the position and sometimes velocity, of your system.]

That's not all of it: because everything is governed by Newton's law and Newton's second law ($F=ma$) is a differential equation, the state at time $t+dt$ is completely determined by the state at time $t$. This means that not only you are in a bound space (i.e. you can only choose $(h, v)$ according to the equation above) but you are also in a cycle meaning that once you choose the first value, the second one is pre-determined, and the third one too and so on: you move from one "state" (from a point $(h, v)$) to another state according to Newton's rule, you are constrained in a "finite" space and eventually you have to come back where you started: this is a cycle.

Fixed in a cycle: describing your cycle with energy

So you see, there's only two things describing your ball: its position $h(t)$ at time $t$ and its velocity $v(t)$. The couples $(h, v)$ completely determine your system because of Newton's equation and the space containing all the couples $(h, v)$ is called "phase space".

Can we describe our cycle somewhat? Imagine you drop your ball starting from a height $h(t=0)=1$ (in some units). The ball has a mass of $m=1$ in some units and the acceleration of gravity is $g=10$ in some units. This means that

so now the above equation of conservation of energy, putting in the numbers becomes

This is an equation giving you, once you choose $h(t)$ the corresponding value of $v$ according to

and you already notice a couple of things: $h$ cannot be higher than $h=1$ (the starting height) and for each $h$ there's two values of $v$ (one going up, one going down). Indeed, if you plot these points (the points describing a system are called "points in phase space") you get this: 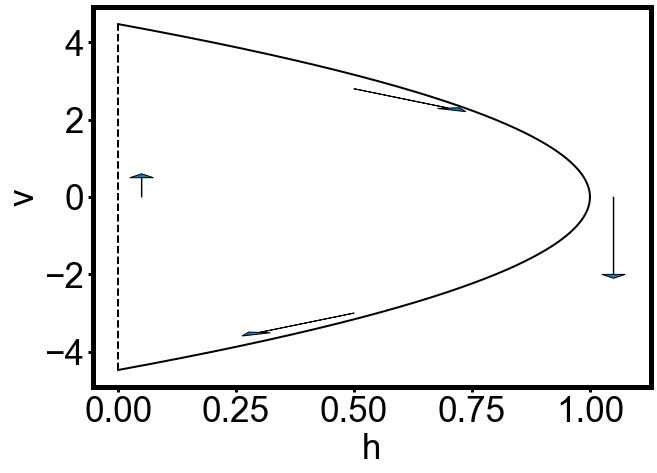 The arrows indicate motion according to Newton's equation: if you start at (h=1, v=0), you go down up to $h=0$ increasing in (negative, pointing down) velocity, you bounce reversing your speed (dashed line - the example we chose is a bit tricky in that it involves this violent speed reversal but let's just give it for granted!) and you go up again until you are at (h=1, v=0) and the cycle starts again. But you could start anywhere on the cycle (at height $h=0.75$ with speed $2.23$ pointing up or down) and you would still follow the cycle because evolution is dictated by Newton's law. And remember: you can choose starting positions only according to conservation of energy i.e. the starting position must be on the cycle and have a total energy $E_0$!

The $size$ and $shape$ of this cycle is given by the energy: by choosing the inital value $E_0=mgh(0)$ you set the size of the cycle according to the equation above! Here (in red) is an example of the same system with an initial energy of $E_0=5$ it looks exactly the same, but it's smaller because it has less energy 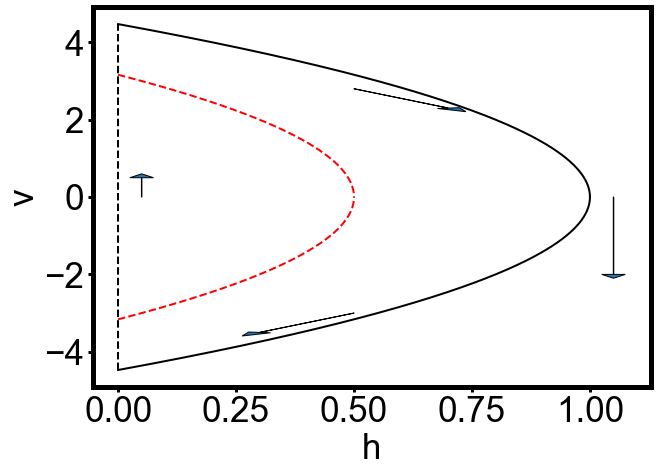 So what Susskind is saying is that, once you put your system in its cycle, you can describe the complete cycle using one number, i.e. the total energy $E_0$. That will give you the complete set of points (position, velocity) that describe your system and it will also tell you, given an initial condition, how it will evolve in time (simply follow the arrows in the pictures). The fact that the system can never leave this cycle is a demonstration of conservation of energy, which adds a constraint on the couples $(h, v)$. You can sort cycles according to the energy that they have because they never mix, because the same cycle can only have one energy. In a way, a Susskind says, once you release the particle it will "remember" where it started from and get back there. But the particle is not actually remembering: it's just constrained by physics to end up back there, as if walking in circles.

Also, the different cycles he mentions could be cycles of the same system with different energies (one has energy $Q=1$ one $Q=0$ etc. or they could be cycles of different systems (a pendulum, etc). One thing is for sure: once you decide which forces are acting (gravity? a spring?) to starting position of the system it corresponds a unique cycle with fixed total energy. That's just how Newton's equation works!

Another way to see it, more similar to Susskind's analysis is that instead of points $(h, v)$ you have discrete states (i.e. you don't move continously but you jump from one state to the other) and there also is a rule saying that if you are in a state in which the velocity points downwards, you jump to a state of lower altitude, if you are in a state with velocity pointing upwards, you go to higher altitudes (with the exception of the velocity reversal at $h=0$). To this, it corresponds the following cycle, with discrete points along the same curve as before: 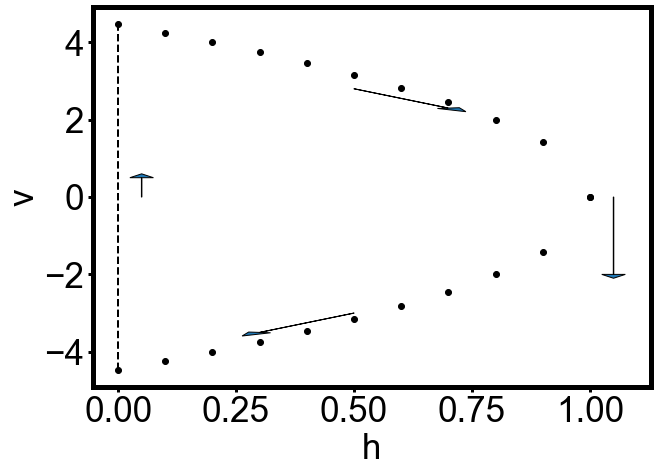 Again, the shape of the cycle however is given only by the energy, and the way you move by the rule you gave your system (in the previous case: $F=ma$, but you can invent any rule and get a different dynamical system, provided the rule is such that from a given state you always go to a single other one). The point is, given a set of state and a rule to jump between them, you are forced to obey the rule and thus can not escape the cycle and thus you can describe the whole system by a single parameter: the "identifier" of the cycle you are in. In classical mechanics, that identifier is the total energy. That identifier will be conserved throughout the cycle!

Not that this concept (a dynamical description of your system) will be dramatically expanded in statistical mechanics and quantum mechanics and the interesting thing is that at the base of such different descriptions there are the same concepts, i.e. the fact that systems evolve in a space described by (position, velocity) [this will be expanded a lot in QM] and conservation of energy [which holds up to a point in SM].

A state space is a set of points, usually conveniently indexed by (generalized) coordinates $\mathbf{x}$ and assumed to have some topology (Susskind is being way more general than most textbooks).

A typical example would be two particles interacting gravitationally: the energy and angular momentum are conserved, and remembered by the system indefinitely. The state space consists of their coordinates and velocities (12 numbers in total), but conservation forces it to stay on lower-dimensional surfaces where energy and the angular momentum vector are constant. These surfaces foliate the state space and the dynamics never crosses them.

In the example the system can undergo closed cycles if the particles are orbiting each other, or their positions change forever if they are on unbound trajectories. Susskind (if I remember the book right) allows for infinitely long cycles of states.

I'm not familiar with his parlance so I don't know exactly what a "dynamical law" is, but I think the passasge must mean something like this.

When you have a one-parameter group that leaves a hamiltonian invariant, it gives rise to a smooth function $I$ on the state space such that solutions to the hamiltonian are confined to level sets of $I$. If the cycles mean the level sets, then I think the "memory" he's talking about this confinement.

Not the answer you're looking for? Browse other questions tagged newtonian-mechanics classical-mechanics lagrangian-formalism conservation-laws hamiltonian-formalism or ask your own question.