Simplified delayed choice quantum erazer experiment: is it possible to create an interference pattern at D0?

If we were to create a much simpler experiment by replacing all detectors and equipment by two screens S0 and S2, would it be possible to visually see an interference pattern if we tried (pick a suitable distance and angle for the screens S0 and S1, make sure we pick the right beams coming off the SPDC)?

I know that SPDC are rare events, so most photons would be noise on the screen. Let's assume for a moment that we had a more efficient SPDC.

If the answer is no: why not? (Assuming noise is not the issue). Do we need any additional equipment (which kind)? I understand that the photons that come off the SPDC are not the same as the original photons produced by the laser. So if no interference pattern is possible because of the SPDC, then I don't understand why we would be able to get an interference pattern then in the full experiment as described on the Wikipedia page when adding BSc, D1 and D2? 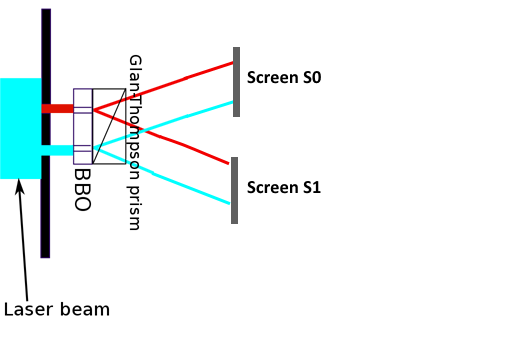 In case the SPDC is the issue, then how about replacing it with beam splitters? Would we see an interference pattern in that case? 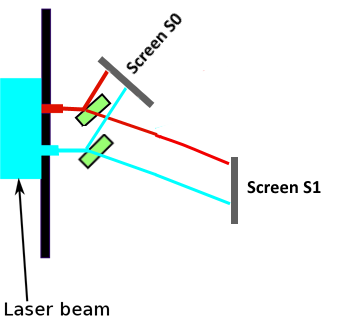 For reference, here is the full set up: 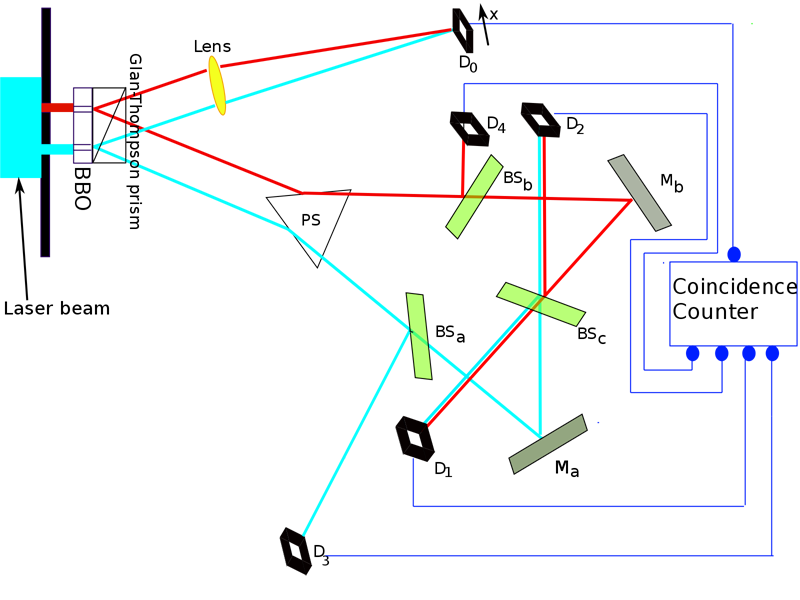 I think there is a basic misunderstanding of the instrumental setup due to the existing double-slit: In the original Young experiment the double slit was illuminated by a coherent light source, producing a interference pattern. In Wheelers delayed choice experiment the double slit is used to illuminate two independent regions of a BBO crystal by the pump laser, each producing by down conversion entangled photon pairs by a pure random process. That means, the "red" photons have no correlation with the "blue" photons. Therefore in your first picture no interference is to see on S0 and S1. In your second picture with the BBO crystal removed you restore the Young configuration with a double slit illuminated with the coherent laser radiation and interference at S0 and S1. In Wheelers experiment interference at D0 occurs due to a selection of a sub-set of all events at D0 by the coincidence counter : Only events with a coincidence (by pure chance) of the "red" and "blue" idler photons (going in downward direction from the BBO crystal) are used. The entanglement of the idler with the signal photons creates at D0 a "synthetic" coherence of "red" and "blue" and thereby interference.

Not the answer you're looking for? Browse other questions tagged quantum-mechanics interference quantum-eraser or ask your own question.