Have anyone seen an unbound electron absorb/emit a photon via Bremsstrahlung process?

I know free electron cannot absorb or emit photon as it cannot satisfy both the conservation of energy and momentum at once but how about in Bremsstrahlung process? The presence of a positively charged particle is used to deflect the trajectory of an unbounded electron causing it to decelerate/accelerate depending if it's inwards or outwards, then it should emit photon no?

Bremsstrahlun photons were used in order to identify electrons when studyig elementary particle interactions in cloud chambers and bubble chambers.

Strong magnetic fields were imposed so that charged particles would bend and their momentum measured. The photon from the bending electrons pair-produces in the chamber and thus identify the photon

In this paper one such example is given in page 19,

This unassuming picture is one of the bubble chamber ‘greats’: a tiny electromagnetic shower demonstrates the existence of a very simple, but rare, collision between an anti-muon neutrino ̄νμbeam particle and an atomic electrone−in the bubble chamber liquid 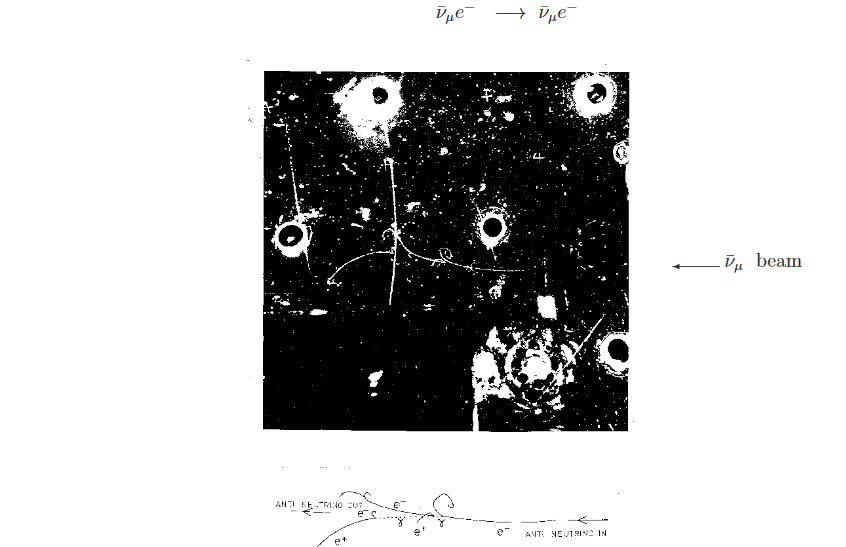 The first e− is the one that was knocked out of an atom by the ̄νμ. The two little e+e− pairs are produced by bremsstrahlung photons emitted from this first electron, thus identifying it.

Not the answer you're looking for? Browse other questions tagged photons electrons energy-conservation photon-emission or ask your own question.

3
Can unbound electrons jump energy levels?
10
How does gamma-gamma pair production really work?
15
How does an electron absorb or emit light?
3
Bremsstrahlung emissions of an electron dependent on electron energy?
0
An intuitive reason why (classicaly) a free electron can't emit a photon
2
Free (unbound, so not bound to a nucleus) accelerated electron cannot emit/absorb a real photon?
2
In the case of the Dirac Equation,what forbids the free electron to absorb a photon? (electron magnetic moment)
11
How can two electrons repel if it's impossible for free electrons to absorb or emit energy?
1
Why doesn't an electron emit a photon when it absorbs one?