Why are snowflakes flat?

There have been many questions and excellent answers in this community about the symmetry of snowflakes, e.g., here and here. There is however one aspect of snowflakes that does not seem clearly addressed: Why are snowflakes flat?

I am looking for answers based on credible scientific sources.

The most comprehensive, rigorous work I have ever seen on snowflake formation is Dr. Kenneth Libbrecht's (free) book Snow Crystals (I've linked to its location on the Arxiv). This answer will pull essentially exclusively from this work; think of it as an introduction to/summary of parts of this work that will hopefully segue into the whole thing. So, in my answer, I'll first cover the hidden assumption in your question (namely, that snowflakes are all flat!) and then get on with the meat of the question.

As an introductory aside, I'd like to answer this related question, for completeness's sake. The answer is, as you could probably guess, is a resounding no! There are an astonishingly large amount of ways snowflakes/snow crystals can form. Figure 10.3 from Dr. Kibbrecht's book shows a decent amount of ways the morphology of snow crystals can vary: 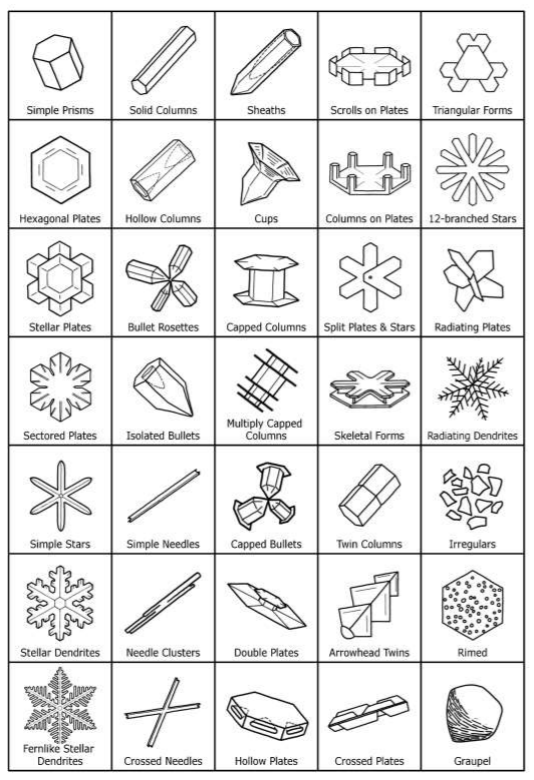 This is just a selection of shapes! Snow crystals are enormously varied in shape and form. Do note that nice, symmetrical snowflakes are actually quite rare naturally; much snow falls in irregular crystal clumps. Figure 10.1 is a rough guide to what morphologies are likely to occur at differing temperatures and water-vapor supersaturation (asumming constant conditions; according to the author, "The 'water saturation' line shows the supersaturation found in a dense cloud of liquid water droplets"). 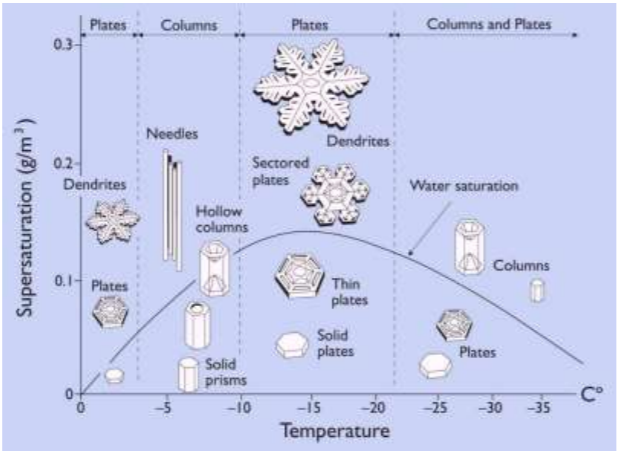 For more information on snow crystal types, consult chapter 10 of the aforementioned book. Now that we've got that particular line of inquiry tucked away, let's get on with it:

Why are flat snowflakes flat?

Good question! To be fully honest with you, we don't have a complete explanation yet. However, in lieu of an accepted explanation, I will provide a summary of Dr. Libbrechet's findings.

In water ice, the molecules orient themselves with respect to the polarity of the molecule; the partial charge on the hydrogen and oxygen atoms results in the Bernal-Fowler rules (there is always one hydrogen atom in between two oxygen atoms, and thus two strong and two weak O-H bonds for each oxygen atom). Due to the close similarities between the angle of a water molecule and the tetrahedral angle, water ice has a crystal structure that is effectively tetrahedral. There is an ambiguity in the crystal structure as shown in the diagram below (Figure 2.4 in the book): on the left is the structure of hexagonal ice, while the right has the structure of cubic ice (balls are oxygen atoms, sticks are hydrogen atoms). 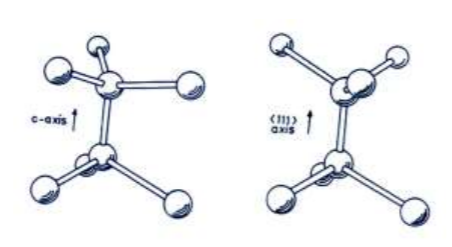 However, only hexagonal ice is stable in nature (at least in ordinary conditions), resulting in a fundamental crystal of the below shape (Figure 2.5): 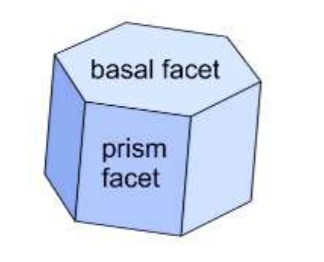 The shape of this proto-snowflake is the fundamental cause of six-fold symmetry in normal snowflakes. Now that we understand the fundamental unit of a snowflake, let's see how it grows! Now, an important relation in snowflake growth is the Hertz-Knudsen relation, which states: $$v_n=\alpha v_{kin}\sigma_{surf}$$ where $v_n$ is the crystal growth velocity perpendicular to the surface in consideration, $\alpha$ is the attachment coefficient, $\sigma_{surf}$ is the water vapor supersaturation, and $v_{kin}$ is the kinetic velocity. The important quantity here is $\alpha$, which is a number between 0 and 1 and can be interpreted as a sticking probability of a water vapor molecule joining the crystal as part of the surface. These provide a very easy way to explain when flat snowflakes vs column-like snowflakes form (as seen in the charts in the preceding section). When $\alpha_{basal}\gg\alpha_{prism}$, water vapor piles onto the tops of the protocrystal, forming columns. When $\alpha_{basal}\ll\alpha_{prism}$, water vapor sticks to the sides, forming flat, platelike crystals. This leads to the development of nucleation theory. We have a simplified model that states $$\alpha(\sigma_{surf})=\exp(-\sigma_0/\sigma_{surf})$$ $$\sigma_0\propto\frac{1}{T^2}$$ where $\sigma_0$ is a dimensionless constant. The exact dynamics behind $\alpha_{basal}$ and $\alpha_{prism}$ are beyond the scope of this answer (there are a lot of nontrivial effects that scorn our attempts at a nice, pretty model); consult chapter 3 of the book for more information. However, in summary, certain pressure/temperature conditions result in different values for $\alpha_{basal}$ and $\alpha_{prism}$, which is the root behind the formation of column or flat snowflakes.

Not the answer you're looking for? Browse other questions tagged symmetry atmospheric-science crystals ice or ask your own question.

32
Why are snowflakes symmetrical?
18
Why do crystals grow in preferred directions?
6
What’s the intuition behind snowflake symmetry?

32
Why are snowflakes symmetrical?
9
Why there is a flat band for Kagome lattice?
1
Why are (most) solids periodic?
18
Why do crystals grow in preferred directions?
0
Are There Any Theories To Explain Why Ice Freezes in Orthogonal Patterns on Surfaces Such as Glass
7
Why do clouds generally look flat at the bottom?
2
Why do the symmetries of a simple cubic lattice not include a 4-fold rotational axis through the lattice points?
4
What are these geometric patterns on ice?
2
Why phonons are Goldstone modes?