I would like to see a rigorous treatment of stability analysis.

For example, a lot of high-school level texts give examples like this: https://courses.lumenlearning.com/physics/chapter/9-3-stability/ 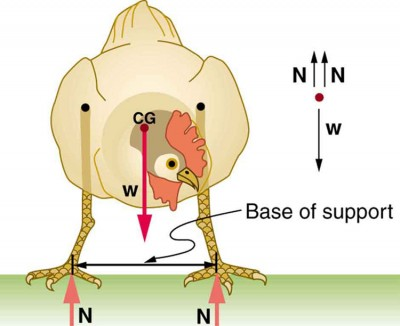 What is the quantitative theory behind this?

If I give you an arbitrary object mesh, it's center of mass, and its position and orientation, can you give me a formula to determine if it is stable or not?

What if I give you $n$ objects?

What is the quantitative theory behind this?

The chicken is more stable the greater the restoring force or torque. See the right side figure below for an example of restoring torque where a force is applied from the left so chicken's left foot just leaves the ground.

When the force is removed, the counterclockwise torque acts to restore the chicken to standing on both feet. Note the following:

If I give you an arbitrary object mesh, it's center of mass, and its position and orientation, can you give me a formula to determine if it is stable or not?

Not sure what you mean by "an arbitrary object mesh", but as your link explains a system is said to be in stable equilibrium if, when displaced from equilibrium, it experiences a net force or torque in a direction opposite to the direction of the displacement. So any formula will involve a net force or net torque. 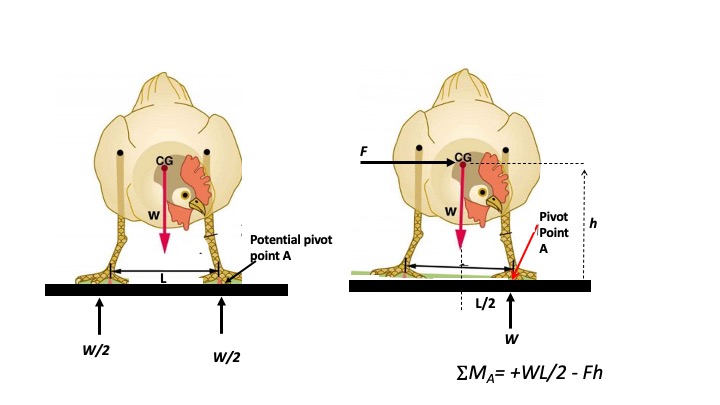 Today I'm in the mood of trying to be an artist 😂 : 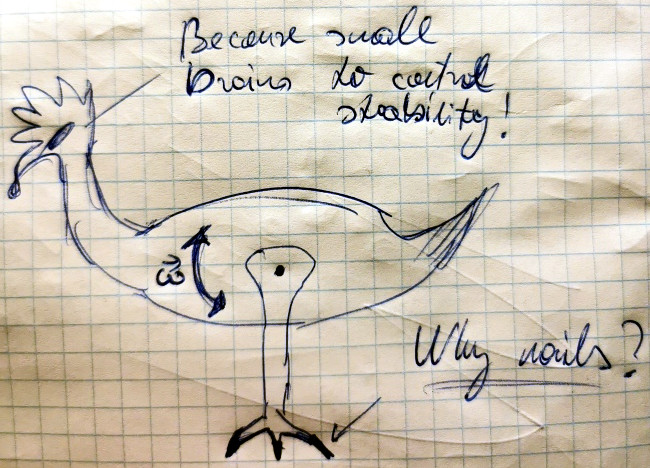 Chicken is stable only partially, otherwise why it needs nails ? Humans uses somatosensory system in brains to control stability and balance in a stationary or moving positions. Chicken has small nervous system, thus nails for compensation.

The quantitative theory behind this is called "Dynamical systems". It is usefull to study large dimensionnal systems (n objects) and also non-linear systems.

If you have access to a university library, you can have a look to Strogatz, S. H. (2018). Nonlinear dynamics and chaos with student solutions manual: With applications to physics, biology, chemistry, and engineering. CRC press., which is a reference for this field.

Not the answer you're looking for? Browse other questions tagged newtonian-mechanics rotational-dynamics equilibrium statics stability or ask your own question.