if we do the double slit experiment but we shoot metal balls in a closed box so we don't observe. what pattern comes then on the board? if i understand correctly there will be no interference pattern because for bigger objects the wavelengths are too small. but do we see as a result then evenly divided points all over the wall or do we see a particle pattern in two places?

As you say, we don't see any diffraction of the balls through the slits, nor do we see any interference pattern; one way to think about it is the idea that there are so many molecules involved in the process that they are constantly observing (interacting with) each other, causing the balls to practically never behave as a wave.

(Key point: the meaning of "observed" when dealing with quantum ideas usually refers to any time another physical "thing" is interacting with it in an interaction that requires the observed particle to "decide" on a particular momentum, position, etc., rather than anything to do with us as conscious/living beings.)

Metal balls are large enough objects that we can even consider most motion-randomizing forces like air resistance negligible in the scenario you describe.

As such, we'd expect to see two fairly straight lines of impact marks, which are positioned in a way that suggests the balls travelled in an almost straight line from the source, through the slit, to the back wall on the other side.

The only reason you see impact marks anywhere other than those two areas for systems involving smaller particles is because as you start dealing with systems on smaller and smaller scales; first, the paths start to deviate from a straight line in a real situation because of things like drag and turbulence forces and random collisions with air molecules, and then as you get even smaller, the wave-like properties of the particles become more and more apparent (though you'd need to turn the box into a vacuum chamber to see this well).

This is when you shoot bullets through two slits: 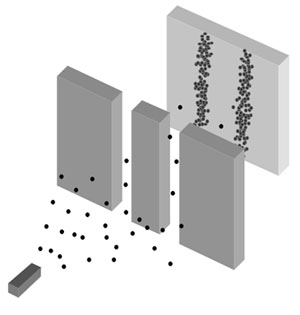 No interference , and the trajectories could be calculated.

If you read on the link you will see that water waves would show interference.

The image shows how the shots are distributed, and it will depend on how one shoots in reality. If one is a good shot, there could just be two large dots.

For large objects to show their quantum mechanical probability in scattering through two slits is not possible. The de Broglie wavelength for a bullet $Î»=h/p$ where p is the momentum and h is the planck constant is of order $10^{-33}$ meters. There is no way for the distance between slits and the slits to be of the order.

The answers by @LeoWenn and @annav correctly explain the observations in case of no interference. While this is likely the case when we are talking about "metal balls", which seems to imply objects containing the number of particles of the order of the Avogadro constant, the transition from interference to no interference is more subtle.

It is important to point out that what determines whether we observe the interference or not is determined not by the object wave length - these one determines the spacing between the peaks in the interference pattern, but by the coherence length, which should be longer than the length of the particle path. One can concievably imagine an experiment with large ball-like molecules, such as C60, which would interfere just as the elementary particles. (These molecules are knwon to exhibit quantum properties, but I am not aware whether anyone tried to do a two-slit-like experiment with them).