Can a satellite have one axis horizontal to its host, and spin about that axis?

Apologies if I'm not getting the terminology quite right with this question. Some natural satellites (e.g., most planets) have orbital position and axial tilt disconnected; that is, they're rotating about an axis, and that axis is fixed in space, pointing closer or further from the star depending on position in its orbit. Other satellites (e.g., most moons) are tidally locked; that is, their orbit and rotation are synchronized so the same face always points at is planet (requiring an axis of spin close to perpendicular, I think).

Somewhat similarly, the ISS in normal operations keeps a constant face towards the Earth, but this requires some control mechanisms (mostly gyros) to continually rotate/pitch the station and maintain that attitude. I believe there are some artificial satellites that keep their axis of rotation pointing towards the Earth in a stable configuration.

My question is this: Could there be a satellite that maintains a long axis horizontal to the host body, travels in the direction of that axis, and rotates about that axis?

Taking this image of the ISS as a comparison: If the extensions in the y-axis were removed (the solar panels and heat sinks), could the x-axis be kept horizontal with the Earth (as is the normal mode), while rotating/rolling about that x-axis (which differs from the normal mode)? 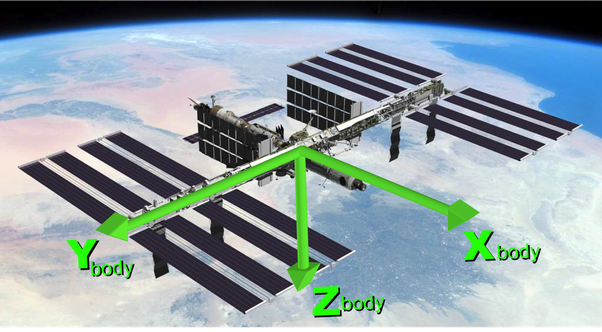 Some other related articles:

I'm mostly thinking about the case of something like a standard asymmetrical asteroid or minor plant orbiting a star, if that makes a difference.

could there be a satellite that maintains a long axis horizontal to the host body, while rotating about that axis?

Yes. In fact that is exactly the case with the ISS, but it depends on the orientation (the rotation axis is perpendicular to the direction of travel). In your diagram above, the ISS has the velocity vector pointing along the x-axis, and the rotation is about the y-axis (the long axis). This axis is horizontal to the earth, and it rotates once per orbit.

But if you want the velocity vector to align with rotation, then the answer is no. The velocity vector is constantly changing for an object orbiting the earth, but the rotation axis needs to stay roughly constant.

In the simple case, whatever axis you are rotating around must be fixed, or you have to come up with a huge amount of torque. To precess the rotation axis to remain aligned with the velocity vector would require enormous torques.

Yes. There was some periods early during construction where it did not rotate during the orbit (due to the solar panel orientation), but the current configuration rotates once each orbit, so the z-axis in your diagram is always pointing at the earth.

but this requires some control mechanisms (mostly gyros) to continually rotate/pitch the station and maintain that attitude.

Sort of. The orientation if left uncontrolled would start wobbling, and the axes wouldn't line up with the earth as nicely. But the overall shape of the rotation isn't "powered" by the station.

I believe there are some artificial satellites that keep their axis of rotation pointing towards the Earth in a stable configuration.

No. There are communication satellites that are spin-stabilized, but their spin axis is perpendicular both to the velocity vector and to the earth.

9
What exactly is the microgravity field in orbit?
1
Energy in orbit of satellites around the earth lost?
0
Lagrange L4 L5 points and perifocal plane
1
Principle of launching satellites into orbit
4
If a satellite speeds up, does that make it move farther away or closer?
12
Are there any satellite orbit earth perpendicular to the sun and what is the name of this kind of orbit?
1
Does a non-rotating satellite always show the same side towards the main body?