Why is the charge transferred by electrons and not by protons?

Charges are transferred by electrons which we all know. But why can't it be transferred by protons? Well, I searched on Google where I found similar questions already being asked on many sites. However, I didn't find any answers. They were saying that electrons are mobile and similarly protons are busy being nucleons. Also, someone was saying, "By the simple mechanism of separating two things, electrons are pulled out of their Fermi energy levels and into a conduction band to effect charge transference and the creation of a static charge" which I didn't understand at all.

You can totally transfer charge using protons. Or using Na+ or any kind of charged particle. It happens all the time - if you look at how a wet cell battery works, you'll find that while charge across the wire is carried by electrons, current flows along the salt bridge via charged ions (theoretically protons could be among these). I bet if you could somehow make a superfluid out of He+ or something you could use that to carry charge like a superconducting wire.

I think our intuition that electrons are always the charge carriers comes from the fact that:

1.) electrons are very light compared to protons, so if you imagine putting a proton in an electric field and an electron in the same electric field, the electron will be accelerated 1000x more (same charge, 1/1000th the mass). This means that when there is a charge imbalance and either proton or electron flow could alleviate it, the electrons will flow way before the protons are impelled to move.

2.) electrons are the mobile charged particles in a solid - all the protons are bound in nuclei. Since almost all of our intuition about current flow comes from wires or other solid conductors, we're almost exclusively worrying about electron flow.

Protons interact in ways that electrons do not. They get trapped inside nuclei due to the effects of the strong force. Electrons are not affected by the strong force, and so they only get trapped by the electrical attraction to the nucleus which is much weaker in ionized atoms. Therefore it is easier for electrons to move away from one atom to another, transferring charge.

Let me be more pragmatic.

Where do we observe currents? In solids, in liquids and in gases.

What are solids/liquids/atoms made out of? Of electrons bound electromagnetically in shells orbiting tightly bound nuclei which are made out of protons and neutrons. Atoms are neutral

How can me get an atom to be charged? 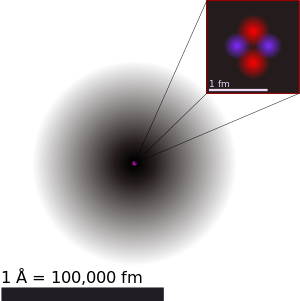 Thus it is easy to find the Kev energy to remove an electron around the atom than the MeV energy to free a proton. Thus in the huge majority of materials it is the electrons that carry the negative charge, and positive charges one gets from the remaining ions, which are large and therefore smaller mobility ( large crossection for interactions).

The exception is the hydrogen atom, and we get protons to form a strong current in the particle accelerators . Single protons in matter cannot be enough in number to carry the currents a la electrons. They will tie up with an electron and find a pair to make a H2 molecule.

The only way I know of to create proton flow would be via fusion. I have read that fusing two He3 atoms together yields energy, Lithium, and a free proton; (verses fusing deuterium and tritium (isotopes of hydrogen), which produces energy, He, and a free neutron.) I believe that a stream of protons would have a positive charge and could produce an electron current directly (in something like a solar panel). This is why we need to go back to the moon...there is no natural HE3 on Earth, but the Moon's regolith is loaded with it, as a byproduct of the solar wind.

because electrons can be easly removed where as protons are bonded to neutron so it will become an atomic bomb if you want to remove protons.

I think electrons are free to move but protons are bound with neutrons with higher force of attraction so electrons carry electric current but not protons.

Not the answer you're looking for? Browse other questions tagged electricity charge conductors or ask your own question.

0
Why don't the positive charges in a conductor move?
0
Flow of charge through metal wire