Why does Misner, Thorne, and Wheeler’s Gravitation visualization technique breakdown in dimension $> 4$?

In this chapter we will introduce and discuss at length one of the ways that physicists sometimes visualize “nice” differential forms. In essence, we will be considering ways of visualizing one-forms, two-forms, and three-forms on a vector space. That is, we will find a “cartoon picture” of $ \alpha_p \in T^*_P R^2 $ and $ \alpha_p \in T^*_P R^3 $ . Our picture of $\alpha_p$ will be superimposed on the vector space $ T^*_P R^3 $ . This perspective is developed extensively in Misner, Thorne, and Wheeler’s giant book Gravitation. In fact, they make some efforts to develop the four-dimensional picture (for space-time) as well, however we will primarily stick to the two and three-dimensional cases here. Section one focuses on the two-dimensional case and sections two through four focuses on the three-dimensional case. Then in section five we expand our cartoon picture to general two and three-dimensional manifolds. Again, this cartoon picture really only applies to “nice” differential forms, of the kind physicists are more likely to encounter, but it is still useful for forms and manifolds that are not overly complicated. Finally, in section six we introduce the Hodge star operator. Our visualizations of forms in three dimensions provide a nice way to visualize what the Hodge star operator does, which makes this a nice place to introduce it. Despite the power and usefulness of the way of visualizing differential forms in physics developed in this chapter, it is rarely encountered in mathematics. One of the reasons for this is that in reality it is not a completely general way of considering forms; when dealing with dimensions greater than four or with more abstract manifolds or with forms that are not “nice” in some sense it breaks down.

from A Visual Introduction to Differential Forms and Calculus on Manifolds (Visualizing One-,Two-, and Three forms Chapter $5$)

One of the Example Techniques

One of the sample tricks he mentions is that we can imagine number of lines the vector pierces as the "magnitude" of the vectors component. 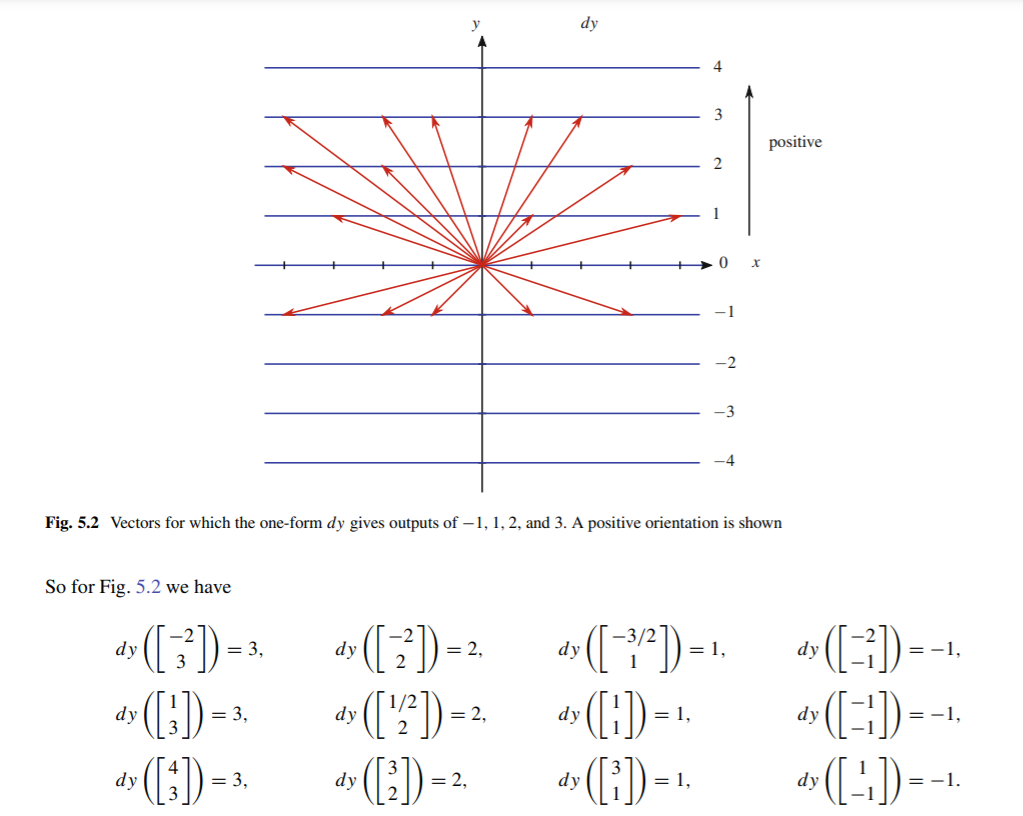 A necessary, but not sufficient, requirement is that the distribution given by the kernel of the differential form be integrable. This would give what is called a foliation of the manifold which would allow the line-stacks, plane-stacks, or tube-bundles to line up. Exploring and explaining this is beyond the scope of this book. It is simply sufficient to realize that even a one-form on $R^3$ as simple as $xdy + dz$ can not be visualized using method two. 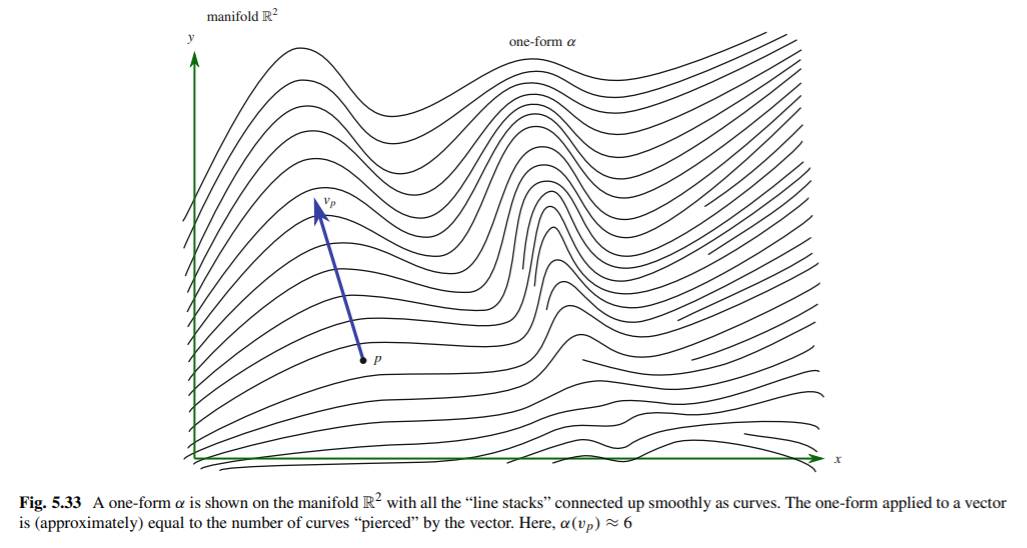 Why does the physicist trick of visualizing differential forms breakdown in dimensions $> 4$?

The author is probably referring to the fact that in two and three dimensions, all bivectors are simple (i.e., that can be expressed as the exterior product of two vectors)... and so can be visualized as an oriented planar tile. (One can say a similar thing for two-forms.)

In general, bivectors would be the sum of "simple bivectors"... and presumably requires a set of planar tiles [at each point in a bivector field]. A physics example would be the electromagnetic field tensor $F_{ab}$ as a generally non-simple two-form.

Not the answer you're looking for? Browse other questions tagged spacetime differential-geometry spacetime-dimensions or ask your own question.

6
Why is space-time four dimensional?
15
Physical Interpretation of EM Field Lagrangian
1
Knots and singularities
7
How to visualize the gradient as a one-form?
12
Equivalence of two formulation of Maxwell equations on manifolds
6
Spacetime has an infinite number of choices for differentiability. Coincidence?
4
If the world had four spatial dimensions, then area would be a tensor?