Why do small patches of snow remain on the ground many days or weeks after all the other snow has melted?

I often notice small patches of snow that remain on the ground in seemingly random locations, many days or even weeks after all other snow in an area has melted, and even when temperatures have been well above freezing for some time. What makes these particular patches of snow so resistant to melting and how do they "choose" to remain in one spot and not another seemingly identical spot nearby?

More detail about my question:

I'm not asking why snow takes a long time to melt in general (I've seen this). I'm asking how it's possible that the conditions would be sufficient to cause almost all snow to melt, but yet a few random patches (the "survivors") are able to escape the fate of the other snow for so long.

These are some possibilities that come to mind:

These are a few examples spotted in the Boston area on Jan 15, 2021. They are not representative of all cases, they're just the images I have available now. Boston had some light snow on Jan 5. There's been sun and rain since then, temps have reached the low 40s, and most of the ground has been clear for days. The question about these snow patches: why there? And why not a foot to the left, or a foot to the right? 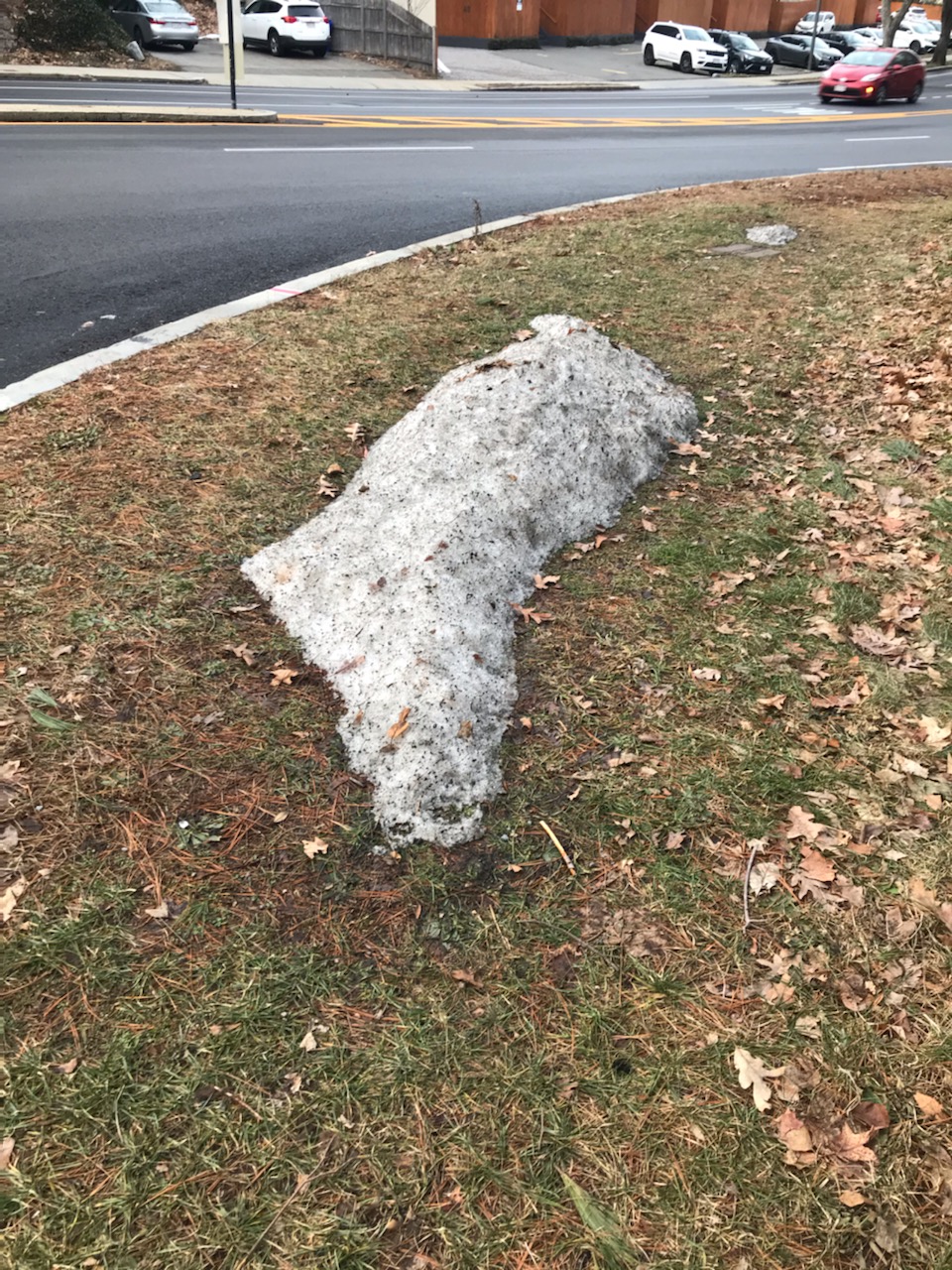 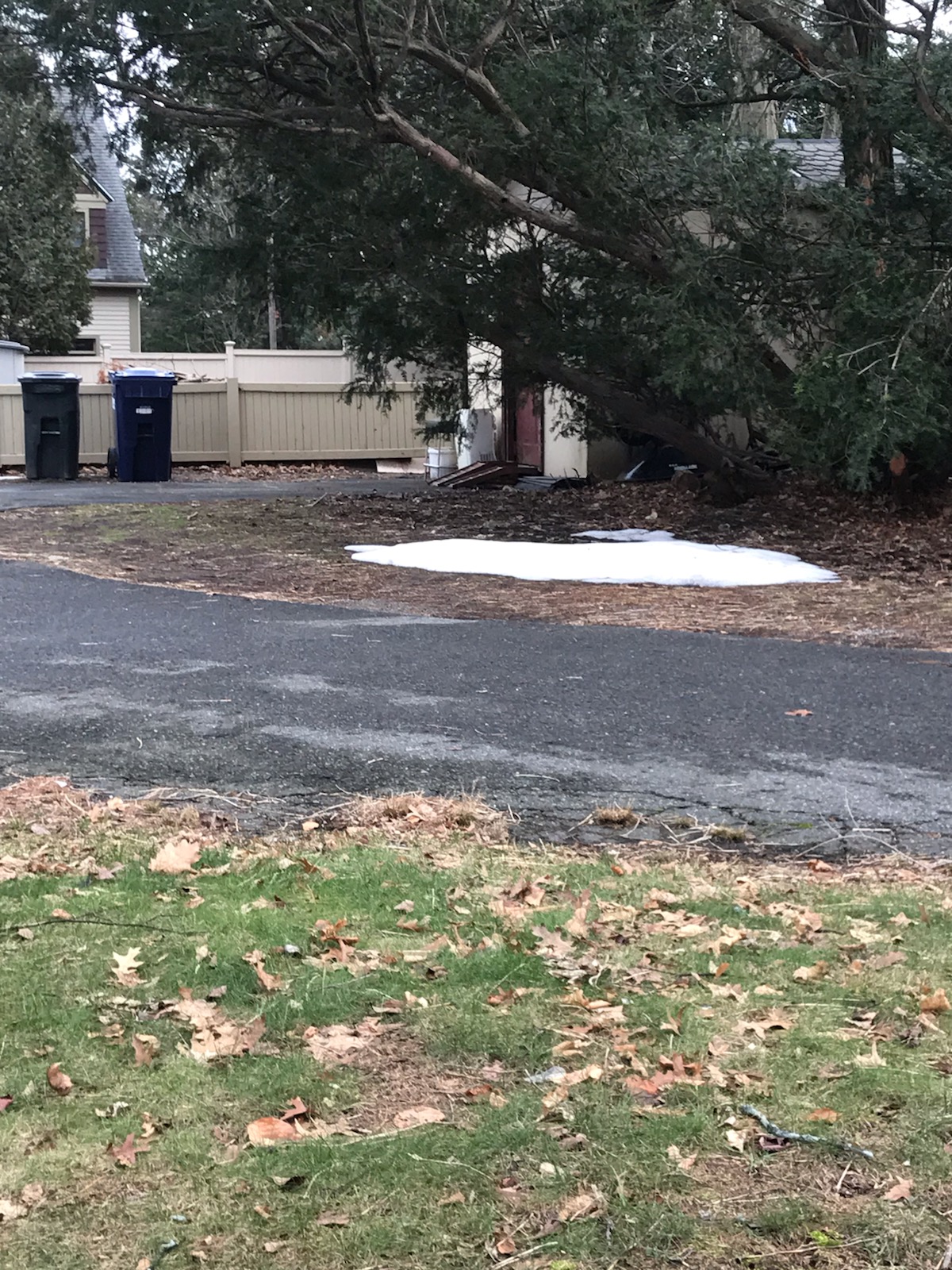 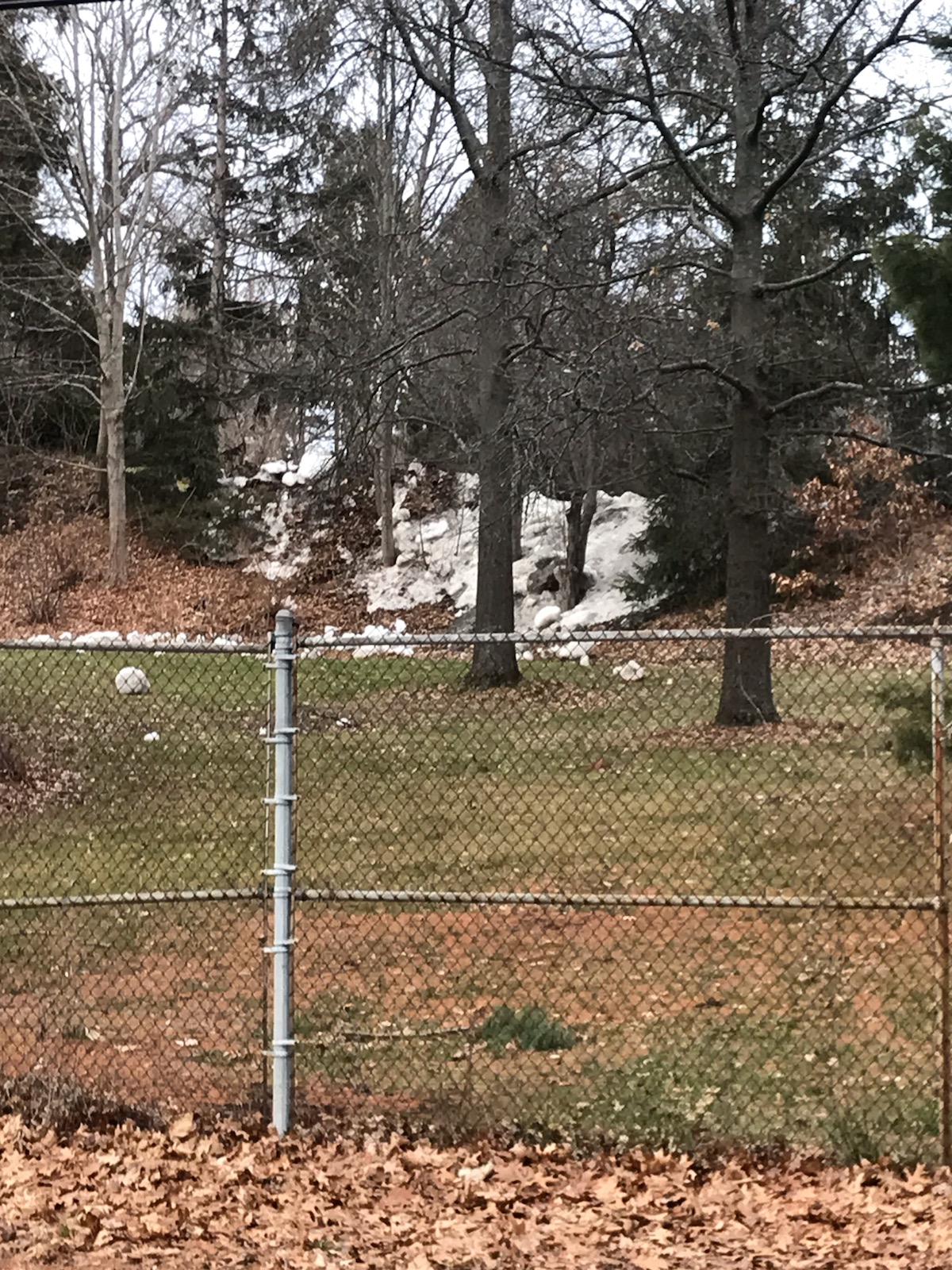 Added Jan 18, 2021: Here is an example of lingering snow patches at the Agassiz Rock site in Manchester-by-the-Sea, MA. I hiked for several hours there today and saw no snow anywhere until I suddenly encountered these few patches. They are on the north side of a hill, on a leafy surface, and likely have good protection from sun and wind. But there's plenty of other leafy ground on north side of the hill where snow would presumably experience the same favorable conditions. So it strikes me as odd that there aren't patches of snow scattered around the area; instead, everything has melted except these few survivors in the picture. Why not them too? The ground is not wet in a way that would suggest that all the other snow had just recently melted. One could speculate that these patches are remnants of a large pile, but there are no plows here; if a large pile formed naturally in this spot, one might expect that the same conditions that formed it would have formed at least a few other piles at the same time, with their own lingering patches, but there are no other lingering patches to be seen. 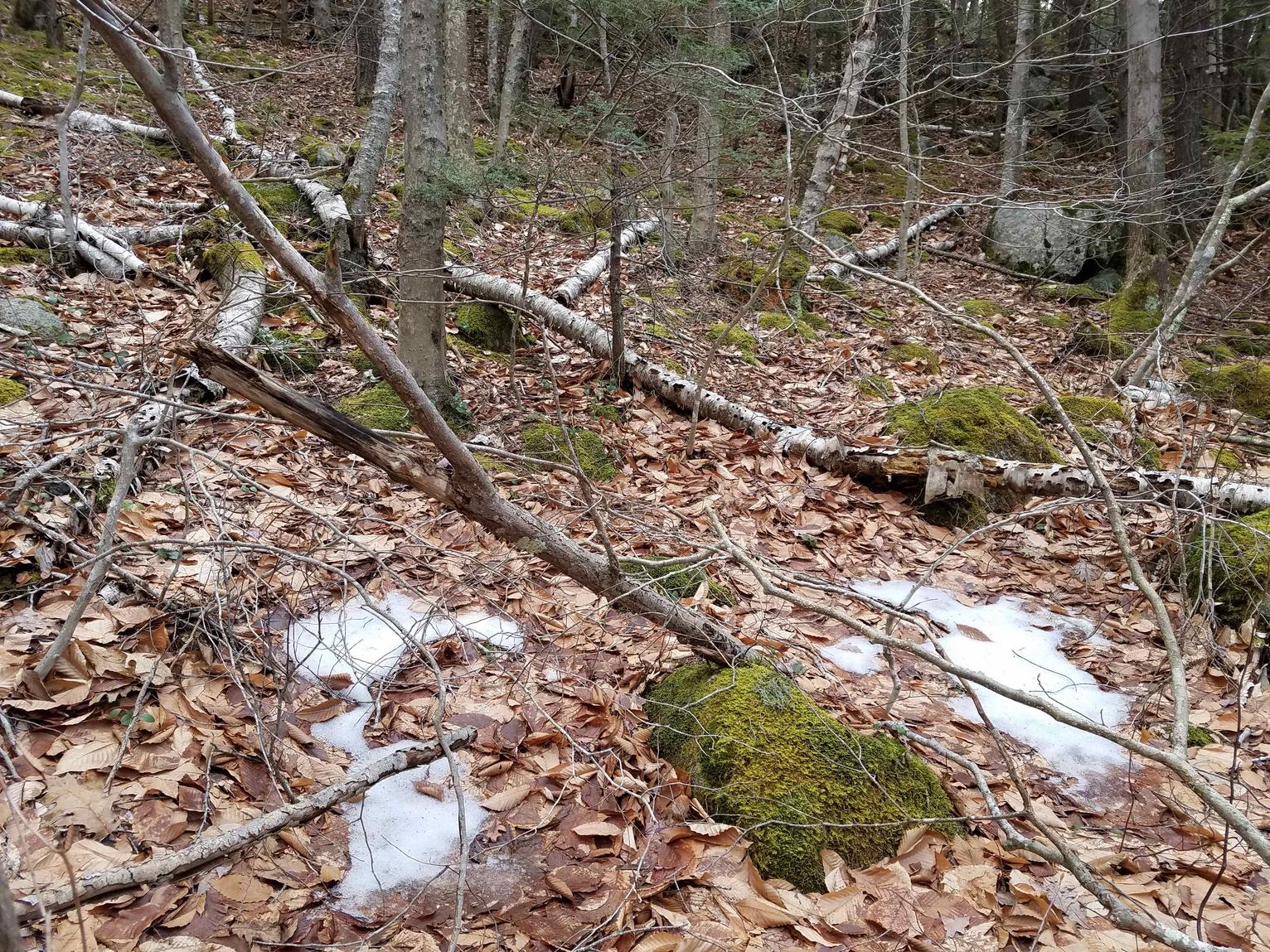 A hidden assumption is that all of your remnant piles start with the same amount of snow. However your first photo seems to be adjacent to, and parallel to, a roadway. You mention you’re in Boston, which has an army of plows which remove fresh snow from the roads and pile it nearby. Snow which has been piled, or otherwise compactified, has less air in the space between the ice crystals and therefore a larger heat capacity than an equal volume of loose, powdery snow. A common example of this is that a snowman will generally take much longer to melt than the snow on the ground around him.

I doubt that there is a single reason. Many particular combinations of factors may result in differences between the melting rate and the quantity left over at some time (which depends on both melting rate and initial amount). Melting rate depends on the nature of the soil underneath as well as the insolation of the area. Shadowy spots tend to keep snow for longer, as you see in the forests in spring. And in the cities of curse that the huge piles produced by the snow removing teams will take much longer to melt than the snow I did not shovel from my driveway. But even on the driveway, it goes in a spotty pattern. Underground pipes and tubes and electric cables may have some part in it too.

The main thing is that there are many different reasons. Your desire to find the one true reason will not work. Your list of multiple reasons is great and they all seem perfectly valid to me. The snow -> Ice freezing overnight and changing its composition is my favorite explanation for patches seeming to hang on and linger longer than expected based on the thaw of what was still snow in original snow state around it. i.e. snow melts fast and snow that has turned to ice later melts slower.

One example why this is complicated: What if a spot is only shady in the morning... and three days in a row the morning is sunny and the afternoons are shady? Another might be: two equally wooded patches but one faces south (no snow) and the other faces north (has snow). These are some of hundreds of examples. Weather is rather complicated :)

I'm not a physicist (I'm a chemical and software engineer), but I did grow up in Montreal before moving to the Rhode Island riviera in my 30s and Texas in my 40s.

There are a few reasons for this.

In Montreal, the snow is not simply plowed. In urban areas, it is gathered and hauled away (google for "Montreal Snow Removal"). The hauled away snow is put into huge mountains of snow, and left to melt over the summer (for example, https://i.cbc.ca/1.4579048.1521203738!/fileImage/httpImage/image.jpg_gen/derivatives/original_780/snow-removal-montreal-theimens-depot-feb-2018.jpg). If you drive by one of those mountains around Labour Day, you'll still see the dregs of the snow, but it will be covered with a crust of dirt, insulating it from the sun.

One way or another this phenomenon must involve the thermal mass of the ground.

Conversely, once the temperature of the ground is below freezing that low temperature lingers on long after air temperatures have risen above freezing again.


When air temperatures rises above freezing my guess is that it becomes a matter of how much the thermal mass of the ground can delay being warmed up again.

It would appear that for some reason some patches of ground resist that rewarming better than others. Once that is the case the snow itself will tend to reinforce that delay. The snow reflects much of the sunlight, and the snow layer acts as an insulator.

So my hypothesis is that only a small difference in thermal capacity can be enough for snow on top of that particular patch of ground to linger much, much longer.

We can easily see one major factor: Snow in a sunny spot will melt before snow in places that get little or no direct sunlight during the day. Even a thin layer of snow under a copse of trees can take much longer to melt than snow that gets direct sunlight for several hours a day.

When snow is piled high, it melts more slowly per unit of mass than snow spread thinly. The ratio of surface area to mass of frozen water is surely a factor.

Another factor that one can soon see by looking at many many snowfalls over several decades is the surface that the snow is on. Blacktop pavement melts snow that is on it relatively quickly. Concrete is the next quickest common surface. Wood decking also contributes to snow melting faster. The snow that takes the longest to melt is invariably on earth with a cover of grass or dead leaves. If the earth is frozen before the snow falls, it may be that the snow itself insulates the earth from thawing even when the earth nearby has warmed up after its thinner snow cover has melted. It stands to reason that frozen earth conducts heat much more poorly than blacktop pavement.

I don't know how many anecdotes combined together become more like a long-term experiment and less like anecdotal evidence, but I've been fascinated with the behavior of melting snow for 30+ years and I've noticed a few patterns related to this question.

It seems to me that the effect of piling up snow on the melting time isn't linear, it's more like geometric or possibly exponential. If I had to guess, I'd guess geometric. But another thing that definitely seems to be true is that there's a tipping point. Suppose a thin layer of snow melts in time $t$. Then let us say a layer twice as thick takes time $2.2t$ to melt. There seems to be way to pile snow (most often seen in corners where plows make the highest piles) where the snow pile takes time $20t$ to $50t$ or more. As in, the unplowed snow on the sidewalk might melt in the afternoon sun the day after the snow fell, but the 3+ foot pile of snow banked up by snow plows at a corner of a parking lot might still be there (often slowly reduced down to a very small amount) in early April!

When I was growing up, there was a parking lot nearby which plowed all its snow into one place. If someone unfamiliar with the area drove by, they would have asked "why is there a little of pile of snow next to the highway in May?" I would have known that there had been a massive pile in February that still hadn't melted. If it has been a few warm days since snowfall, I would say that piles of snow is your likely reason; if not, a combination of piles and factors like shade that result in uneven snow temperatures.

I think the steps of the events is the following:

The melting temperature can differ a little bit from $0^\circ\rm C$ due to the contaminants in the ice (they typically decrease the melting point), particularly if it was melt, contaminated and then frozen again.

Not the answer you're looking for? Browse other questions tagged temperature water phase-transition ice weather or ask your own question.

34
Why does snow stay after a snowfall?

24
Why is concrete dry around cracks?
5
How much atmospheric pressure (CO2) is required to carry iron oxide dust in the wind?
4
Where can I find a table for NIST standards on temperature and pressure?
1
If temperature is dependent on mass, how did the early universe have a temperature?